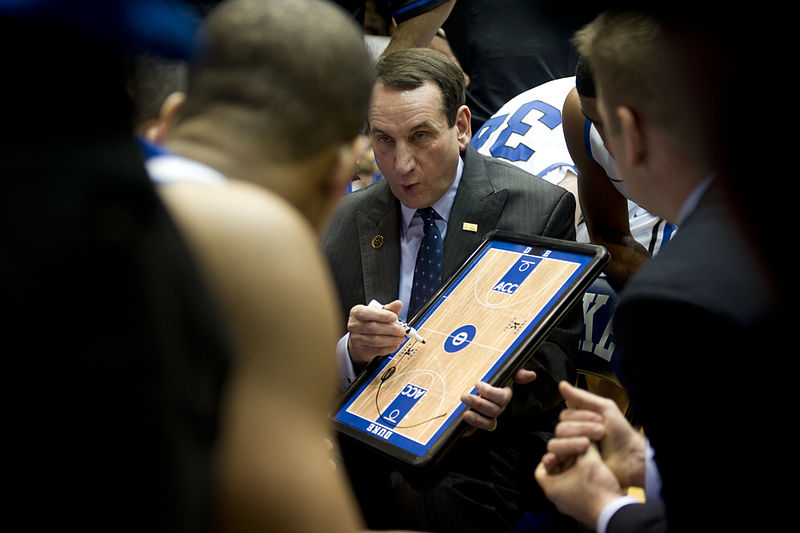 Duke coach Mike Krzyzewski draws up a play for his team during a timeout. Duke went on to win 61-58 against Virginia.

Every year, basketball fans long for March Madness and the drama that it entails. This year was certainly no different. The tournament included history being made, a struggle for several one seeds to advance far and a farewell to the greatest college basketball coach of all time.

It’s time to break down everything that happened over the magical three-week period.

In the first round, we saw a grand total of 7 upsets including the most surprising of all, a 15 seed over a two seed.

A small, private school in Jersey City, New Jersey from the MAC called Saint Peter’s beat the Kentucky Wildcats, one of the best college basketball programs ever, 85-79 in overtime. Kentucky wasn’t just a final four contender, but a potential national championship winner in the eyes of many experts and college basketball viewers. This game, however, wasn’t just a fluke, it was the start of a special journey. Saint Peter’s won the next two games in a similar fashion with grit and a whole lot of character to become the first 15 seed to advance to the Elite Eight.

“Saint Peter’s played with a lot of heart and always had confidence in themselves which allowed them to do so well,” senior Andrew Schell said.

The second round saw the defending national champion and number one seed, Baylor Bears fall out of the tournament to number eight seed, North Carolina. This game early on looked like it was going to be a blowout with North Carolina racing out to an early double-digit lead and ahead by 25 points with ten minutes left. After Brady Manek was ejected for a harsh foul on Jeremy Sochan, Baylor rallied and forced the game into overtime. The momentum, however, was short-lived for Baylor as they ended up losing 93-86.

Two number one seeds fell in the following round, Gonzaga and Arizona, the two best teams in the country. These teams were projected to go very far in almost every bracket. Gonzaga has been a dominant force over the past five years and many thought that this would finally be the year where they broke through and won the program’s first national championship. For Arizona, this was an impressive bounce-back season as they went from a team that only got 17 wins and didn’t make the tournament to a 33-win team and a number one seed.

“I was really surprised. I had both teams in the final four and Arizona winning the whole tournament. I was also really disappointed for Mark Few, coach of Gonzaga, since he is yet to win a national championship,” junior Jonah Silverstein said.

Despite people being shocked about Gonzaga and Arizona losing, some people weren’t as surprised.

“Gonzaga just had a bad night, they couldn’t shoot which happens in basketball. Arizona is pretty inexperienced, so it makes sense that they didn’t do well. The most successful teams always have many seniors and juniors on their roster,” junior Eli Limonchik said.

March Madness saw an end to the career of a legendary coach. After 40 years of coaching basketball at Duke, Coach Mike Krzyzewski finally retired, ending his career as the best college basketball coach ever. Coming into Duke at only 33 years old, he turned the program around and kept Duke as a consistently top-tier team for over 40 years. He led Duke to five national championships and 13 final fours.

“Coach K’s career was very impressive as he came into Duke and kept it as a dominant basketball program for over 40 years. Not many people can be great as long as he was,” Schell said.

At the end of the tournament, Kansas was crowned national champions despite being down six at halftime. Kansas looked like the best team in the tournament right away and deserved to win it all.