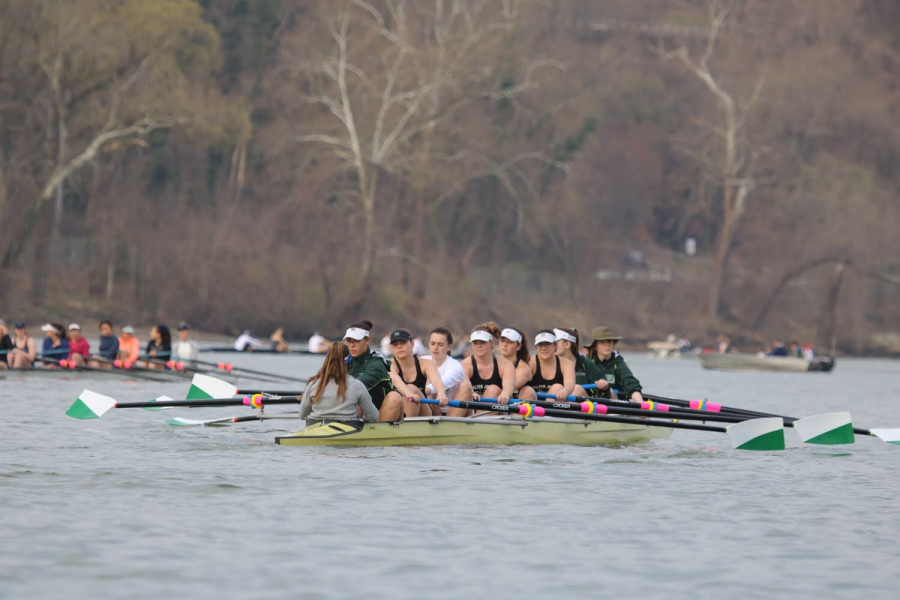 Members of WJ’s Crew team row across the Potomac river while competing in a scrimmage against Washington and Lee. The crew team competes in regattas and scrimmages both in and out of state during the season.

A college admissions fraud scandal dubbed ‘Varsity Blues’ appeared in the news recently, exposing 50 people in six different states who participated in a bribery scheme to get their children into college. The list includes famous actors and actresses, business leaders, and other well known parents. Along with the 50 parents, athletic coaches, SAT test proctors and admissions officers are among the charged. The common theme between all the accused was their wealth.

The parents paid thousands, and in some cases millions of dollars to falsify test scores, and pretend their children were student athletes to be recruited for school teams.Among the 50 charged, the most recognizable face is Full House star Lori Loughlin. Loughlin and designer husband Mossimo Giannulli paid $500,000 to get their two daughters Olivia Jade and Isabella Giannulli into the University of Southern California. Loughlin allegedly claimed that she was trying to get her daughter Olivia Jade to be recruited for USC’s rowing team. The actress went as far to photograph her daughter on a rowing machine to boost her chances. Loughlin was released on Wednesday, with a $1 million bond.

“From a crew standpoint, this situation makes me really upset. There are girls out there putting 30 plus hours a week into the sport and their spots could’ve gotten taken from them primarily because someone bought their way into this school,” junior and member of Walter Johnson’s rowing team Sophie Difrank said. “The people that put their life’s work into this sport get screwed over because some parents decided the easy way to get them into school was by bribery rather than actually doing the work.”