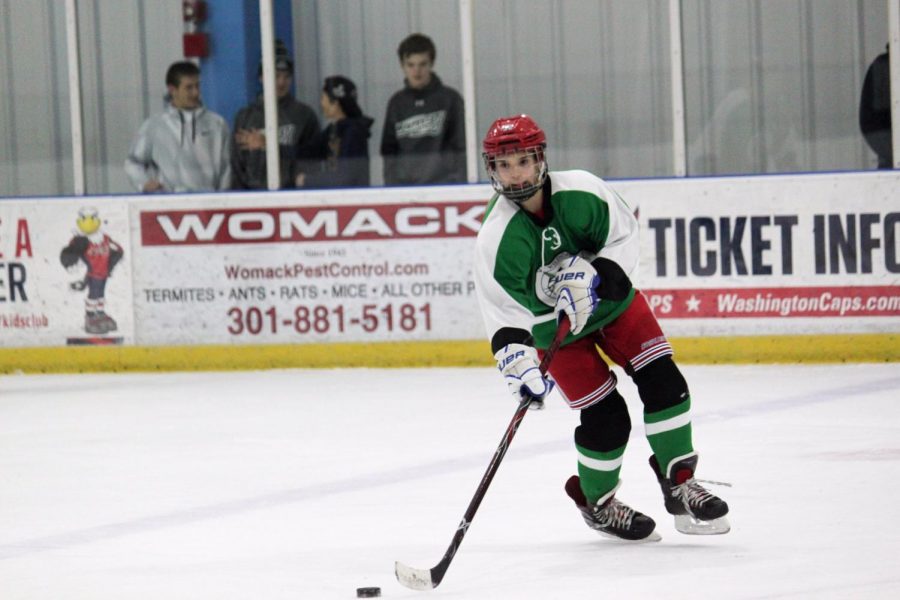 Sophomore Justin Davids has been a key part of the team this year, even as an underclassmen. The future of WJ hockey looks bright.

Although ice may be cold, these Ice Cats are off to a HOT start. With wins over rivals B-CC, Richard Montgomery and Walt Whitman, the Ice Cats see themselves with a 3-1-1 start to the season. The team is known for quick starts; they had a 5-1 record to start last year, but unlike last year, they will not be looking to falter down the stretch.

“We have a skilled team with a lot of good upperclassmen and some key freshmen who have been a nice addition this year. I think we can make a good run in the playoffs this year,” senior captain Mike Greene said.

With Greene sidelined due to a shoulder injury, other players have had to step up. Fellow senior captain Quinn Mulligan has been a playmaker for years on the Ice Cats, leading the team in points last year. He’s starting right where he left off, with 15 points including three goals and 12 assists. The team has also seen sophomore Justin Davids step up in times of need with Greene sidelined. Davids is a forward but has been transitioned back into defence since Greene’s injury. He’s been doing a great job defensively while contributing on offense with three goals.

Key freshmen and fan favorite Ethan Birndorf, although small on paper at under five feet tall, hasn’t let his size get in his way. He has been the heart and soul of the team, energizing the crowd and stepping up with four points including two goals and two assists so far.

However, a key deterrent to the Ice Cats’ success this season has been penalty minutes. Many players have accumulated too many minutes in the box, which allows other teams to score on power plays and take control of the games.

Yet there is hope. Penalty minutes are one small problem for this fantastic team, and the Ice Cats’ have many more strengths than weaknesses. With Green returning soon and the team becoming more disciplined and spending less time in the penalty box every game, there are high hopes for the rest of the season.

The Ice Cats play this Friday at Rockville Ice Rink against Wooton.