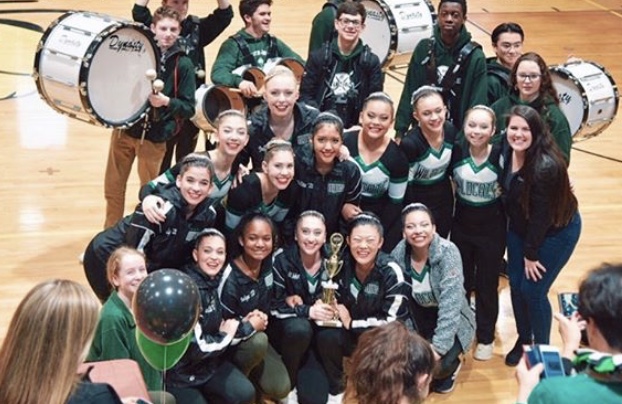 The Poms pose with the drum-line after their third place win at the Damascus Invitational competition.

After a rocky start to the season, Walter Johnson Poms pulled through to complete a successful turnaround. Competing in Division two with a new, more positive coach, the Poms team was confident going into their competitions.

During their fall season, the Pom’s coach quit unexpectedly. Practicing without a coach proved to be a major setback in the productivity of perfecting their performance for competition.

Thankfully for the team, an old coach was able to step in to fill the spot, allowing the team to regain focus and begin perfecting their routines for the competition season.

The team started the competition season well, winning third place in the Damascus Poms Invitational. The team was surprised and excited to see their hard work in practice pay off.

“Starting the season off without a coach made us worried about how the rest of the season would go, but our win definitely proved that our hard work and dedication to the team was working,” Becker said.

Going into the county wide poms competition, this renewed sense of confidence was important in ensuring a powerful last performance. For many of the senior members of the team, this was their last time performing, so they wanted to ensure their routine would be perfect in order to have a chance at winning.

“Winning earlier in the competition season gave me more confidence in our routine for counties. This dance was especially important for me since it is my last year competing with the team, so I really wanted us to do well,” senior Rion Kato said.

At counties, Walter Johnson students packed into the bleachers to watch the Poms last performance. The energy from the crowd proved to be infectious as the Poms performed their powerful and entertaining routine.

While the team did not place in the top three, they were still proud of what they accomplished and overcame this season.

“I think the season went really well considering how much we had to overcome, I’m really proud of everyone,” junior Lilly Belt said.