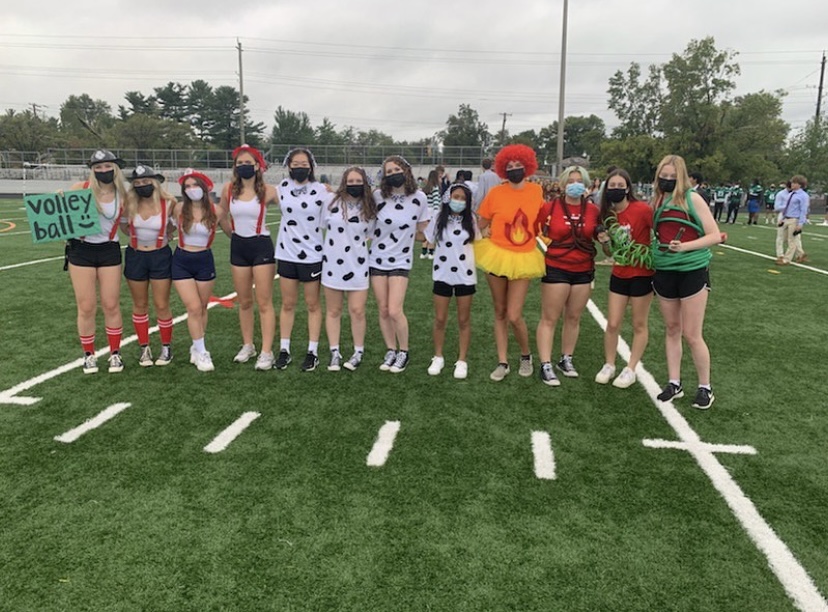 Varsity volleyball shows off their spirit at the fall pep rally. Team captains determined the spirit theme, and players really enjoyed dressing up to show their team pride.

Last fall, volleyball courts stood empty as the girls varsity volleyball team (and the rest of the student body) stayed home during virtual school. This fall, the familiar sounds of cheering, squeaking shoes and hard work have returned to the gym. Like everything else that came with this new school year, getting back out on the court was a process, and not an easy one.

“It was definitely difficult at times considering a lot of us hadn’t done workouts like that in a while, but it was really good to get stronger again as individual players, and as a team,” Senior Captain Halle Burns said.

Physical training isn’t the only thing the varsity girls are focusing on this year. Building mental strength is one of the core focuses of the team to get them ready for game day.

Along with mental and physical training, the girls are getting back to bonding as a team. Like any other team sport, cohesiveness is essential, especially for a game that revolves around communication and encouragement.

The girls had their first game earlier in the month against Kennedy falling 3-0, as they adjusted to their new lineups and new team.

“The first game was a little difficult I won’t lie, we needed a new lineup and eventually figured it out. The second game that we had was a lot better once we had our lineup and things fell into place really well,” senior Alexa Cerrud said.

The new lineup spoke for itself when the girls won the second set out of four against Magruder, last year’s state champions in their second game of the season. While the game concluded with a 3-1 loss, it marks the start of the upwards trajectory for the team this year.

“Taking a set away from the state champions was really amazing, the adrenaline was crazy! Even though we lost, we are always learning and always getting better. We know what we need to practice, so even if we lose we learn how to get better as teammates and athletes.” Fanon said.

The third game of the season against Paintbranch on the 17th solidified the team’s progress with the girls winning three sets, up by at least ten points each time.

The girl’s senior night is set for October 25th on home turf against Sherwood, with nine highly anticipated games in between then and now.

“It will be a fun season, I’m really excited that we’re able to have it, come show your support for the team! Make sure to come out support the team,” Burns said.