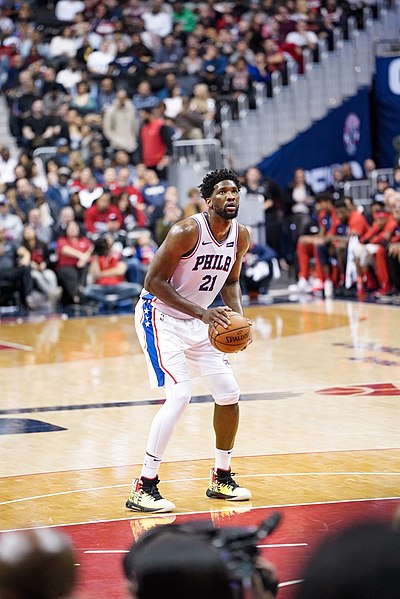 Joel Embiid shoots a free throw against the Washington Wizards. He went on to score 35 points in the 76ers loss.

The 2021-22 season has been far from normal, but some things have remained the same. Injuries, like usual, have caused many teams that would normally be contenders to struggle for wins. Star players like Paul George, Kawhi Leonard, Damian Lillard and Kevin Durant have suffered severe injuries that have hurt their teams’ chances of making the playoffs.

Despite all these injuries, the NBA MVP race is still featuring some big names. As the season winds down, no player has established themselves as the clear frontrunner.

“A lot of players are playing at a high level right now like Jokic and Giannis, so it’s definitely hard to decide,” senior Andrew Schell said.

One of the leading candidates right now is Philadelphia 76ers star center Joel Embiid. Embiid is averaging around 30 points, which leads the league, 11 rebounds and 5 assists per game. His skill set as a 7-footer is quite impressive. Embiid is almost automatic from anywhere on the court. He is shooting 37 percent from three and around 50 percent from the field.

Schell has been impressed with Embiid as he has led his team to a top 3 seed in the Eastern Conference.

“Embiid has been putting up crazy numbers, especially in the last month and it’s without Ben Simmons or another superstar who used to help him score by taking off some of the pressure,” Schell said.

Close behind him is the reigning MVP, Nikola Jokic. The Nuggets center is averaging 26 points, 14 rebounds and 8 assists per game. He is leading the league with 15 triple-doubles and 46 double-doubles. Jokic is the best passing big man the game has ever seen. His playmaking ability is very unique for a center as he is considered the “point guard” of the Nuggets. Jokic makes passes that only he can see due to his extremely high basketball IQ. What makes it even more impressive is the fact that he is doing it without the Nuggets second and third-best players.

“Jokic has been so efficient this season. His shooting has been great, he is putting up the numbers, and his team is winning games. I would also argue he is doing it with not too much help,” junior Eli Limonchik said.

As the second-leading scorer in the NBA behind Embiid, it is impossible to leave Giannis Antetokounmpo off the list. Giannis carried the Milwaukee Bucks to an NBA Championship last season, ending the Bucks 50-year title drought. He has continued where he left off as he is averaging 29 points, 11 rebounds and 6 assists per game.

“What impresses me most about Giannis is his ability to get up and down the floor. Despite the fact that he is big, he moves really well like a smaller player,” junior Guy Saltsman said.

Closing out the list is the new NBA record holder, Demar DeRozan. DeRozan set the record for most consecutive games of 35+ points on 50% shooting with 7 games, passing Wilt Chamberlain. The feat itself is impressive already, but adding the fact that he is primarily a jump shooter makes his numbers insane.

With around 20 games left in the season, there is plenty of time for things to change in the MVP race.