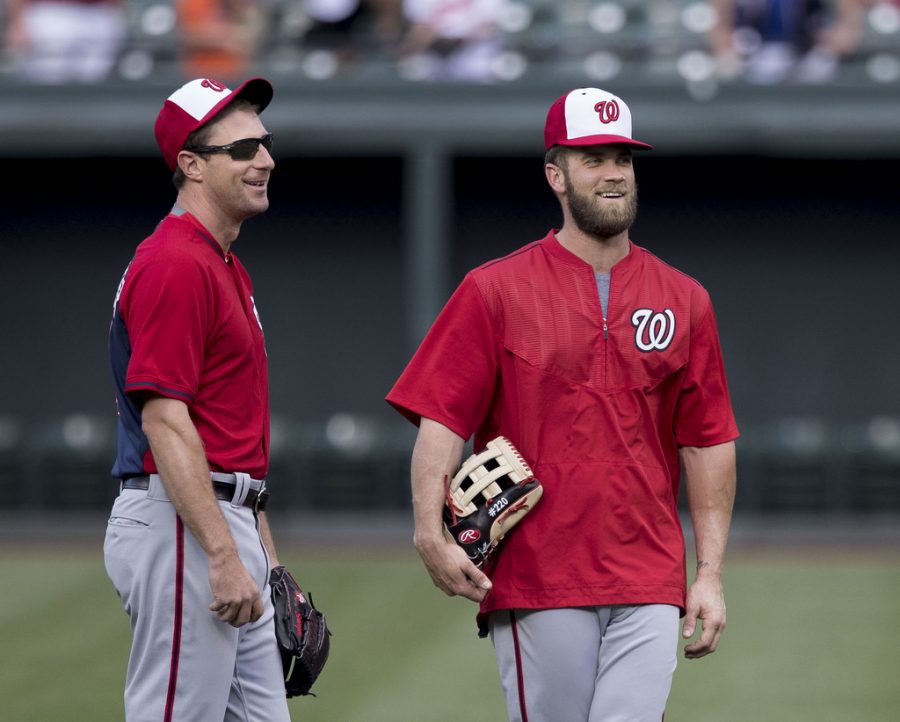 The Washington Nationals have had one of the most successful teams within the past six years. Pitcher Max Scherzer (left) has won two Cy Young awards and outfielder Bryce Harper (right) has won an MVP within that span.

The Nationals have been one of the most successful teams recently in the regular season because they have had winning records over the past five seasons.  In addition, they won the division three times in the past five years.

The Nationals are coming into this season with high expectations and with a new coaching staff, including manager Dave Martinez. Martinez won the World Series with the Cubs in 2015 as a bench coach, but he’s facing a new challenge as the new  manager of the Nationals.

The Nationals started out strong  by winning their first four games, including a sweep of the Reds and four home runs by outfielder Bryce Harper in three games. Also, Nationals outfielder Adam Eaton recently won Player of the Week for the National League.

Even with their early season success, the Nats have been frustrated with their pitching and defense recently. Despite hitting his first career home run, pitcher AJ Cole allowed nine runs against rival, the Atlanta Braves. The next day, after an error at second base by Wilmer Difo, Cy Young award winning pitcher Max Scherzer fell apart, allowing three unearned runs, which lead to a 9-1 loss. Even in the home opener at Nationals Park, the Nats and Mets were neck and neck, until a three run homer by Mets outfielder Michael Conforto and a grand slam by outfielder Jay Bruce.

Many Nationals fans have started freaking out, saying that the Nationals might not be as good as they look on paper, and that frustration on pitching and defense has lead to a lot of pressure on offense. Bad umpiring in the home opener on Thursday led to shortstop Trea Turner getting thrown out of the game.

After, a stolen base and complete game shutout by Scherzer finally lighted a spark within the team. Stephen Strasburg also threw the ball well the next game, and the bullpen has locked down in the latter innings.

It’s only the very beginning of the season. Even though losses in April can negatively impact teams, in the end, the Nationals have lots of time to get hot and be successful, and ultimately  win the division. All Nationals fans hope that their team has a chance to get past the division series for the first time in franchise history.