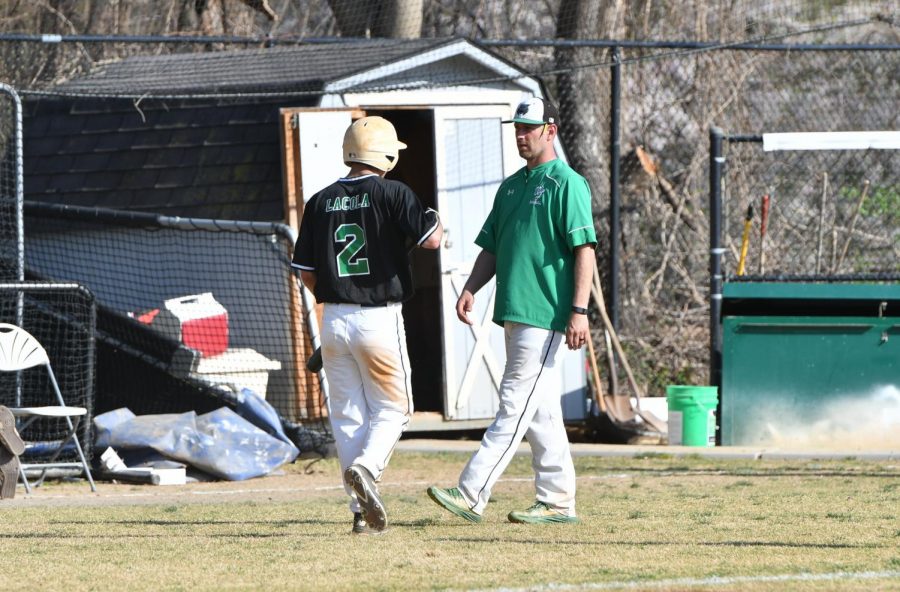 Junior outfielder Anthony Lacola converses with coach Steve Sutherland. WJ had a tough loss against Whitman in the first round 19-16. Courtesty of Lifetouch.

Baseball had a good season this year, going 7-8. With good hitting and good pitching, the Wildcats were ready for the playoffs. They would face Whitman in the first round. They had recently lost to Whitman in April with a close 10-7 score, but in March, they had walked off Whitman in extra innings, so everyone knew that there was going to be a close game.

“I came in knowing it was going to be a back and forth,” senior pitcher Kevin Good said.

Back and forth it was, but it was a game for the ages, but not in a good way.

WJ looked to have the upper edge with a 6-3 lead going into the fourth inning, but bad luck and bad umpiring cost WJ the game 19-16.

“Unfortunately, there were 25 walks between the two teams,” coach Steve Sutherland said, “we were not getting any calls on either side of the plate and curve balls weren’t being called either.  This forced us to throw some over the middle of plate and that’s when we got hit hard.”

Even though WJ had given up seven runs in the fifth, they struck back with eight in the sixth. They were leading 16-14 heading to the bottom of the sixth with their star pitcher senior Kyle Peterson on the hill.

Peterson got two outs, and then struckout a batter to end what they thought was the end of the inning with the lead intact, but the umpire called it back as a catcher’s interference. After that call, Whitman scored five runs to win 19-16.

There were many other rarities and frustrations on both sides. A Whitman infielder was thrown out for hitting senior second baseman Ian Rickles too hard on a tag out at second, a Whitman grand slam, and several controversial walks that should’ve been strikeouts.

It may have been a rough ending of the season, but WJ is poised to make a run for it next year with the guys they have next year.