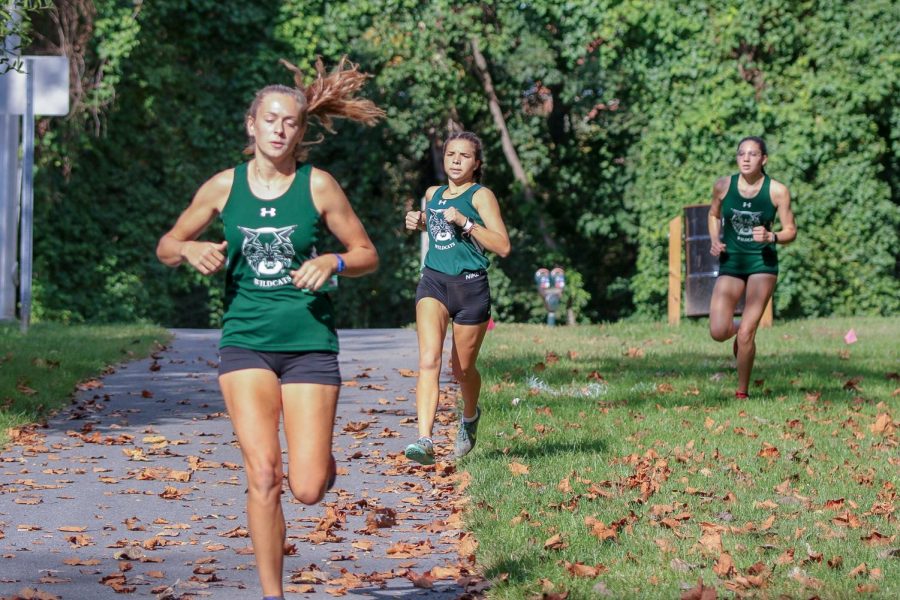 Senior Adrienne Bruch competes in a race. Bruch has proved to be a great leader on the team. Photo credit to Lifetouch.

Cross country captain senior Adrienne Bruch has had a spectacular month, both through her running during the meets and her leadership of the team. This is Bruch’s first year on the cross country team after participating on the indoor track team, making her success even more impressive.

In October, Bruch participated in five events. Bruch dominated the five kilometer races, where she has four top-five finishes. Her top finish in this event came on October 9 when she finished with a remarkable time of 20 minutes and 28 seconds. Bruch has incredibly finished in the top 13in all five of her October races.

She has been humble about her great performances this year, attributing her teammates to being a large part of her great year.

“My teammates have contributed to my success on cross country as this is my first year on the team. I’m familiar with this sort of training from indoor track but cross country is a whole different atmosphere than indoor track. They have made the transition for me really comfortable,” Bruch said.

As well as her performances during meets, Bruch has been a great leader for the team throughout October, as well as the whole season. Coach Tom Martin felt the same as he made her a captain during her first year on the team.

“Fortunately for the cross country team, Adrienne Bruch decided to do cross country in her senior year. She has made an incredible impact as a team captain. She’s thoughtful and she considers every one of the girls on the team. She’s also a very tough kid, she’s pushed herself, she’s our number three girl right now and she’s really helping us out big time,” Martin said.

Bruch has found her captain position tough at times, especially as a new member, but is embracing her role and continues to be someone the younger runners can look to for support.

“Even though I’m new to the sport, my teammates still trust and respect me, which is really awesome. It feels really good when teammates come to me with questions or for advice because it means they trust me,” Bruch said.

Overall, Bruch has performed very well this October and hopes to continue her success throughout the rest of the season.