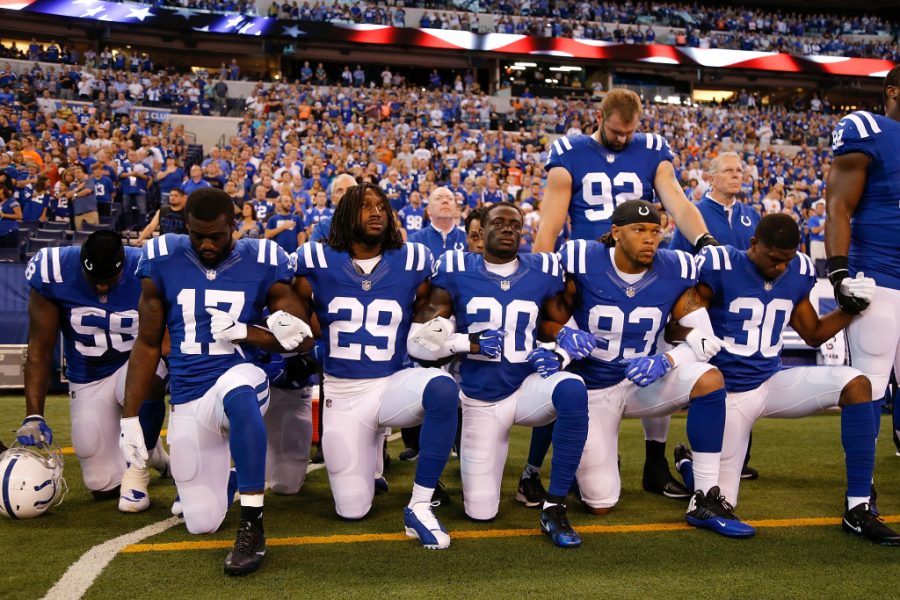 The Indianapolis Colts were one of the many teams that knelt during the National Anthem.

On Saturday, September 23, President Trump made comments regarding the NFL on players protesting during the National Anthem on racial oppression.

“We are proud of our country, we respect our flag,” Trump said. “Wouldn’t you love if these NFL owners, when someone disrespects our flag, say ‘Get that son of a [explicative] off our field, he’s fired.”

This created an uproar within the organization, as almost every NFL organization came out and said that they reserve the right to their players to express themselves. Even commissioner Roger Goodell called Trump’s comments “divisive.”

The next day, in London, the Baltimore Ravens and Jacksonville Jaguars knelt or locked arms during the American National Anthem, creating a precedent for the entire day.

During the rest of the day, players from almost every team, knelt, locked arms, sat or didn’t even show up during the National Anthem.

The Seahawks and Titans agreed to not show up during their game in Nashville-coming out of their respective tunnels locking arms with their fellow teammates.

The Steelers didn’t show up to start the ceremonies as well, except one player, former army veteran and offensive lineman Alejandro Villanueva. Villanueva served in Afghanistan for three terms, and instead of running out of the tunnel or staying in with his teammates, he came out but stayed a little outside the tunnel, standing with his hand on his heart, honoring his flag. But on Tuesday, Villanueva and quarterback Ben Roethlisberger explained to the public, that Villanueva standing was a mistake and a miscommunication, and apologized to the public and his teammates for his actions.

“In the past, Villanueva has said he aligned with player frustration over racial injustice, but the sacrifice of the military is too great to minimize the anthem,” ESPN writer Jeremy Fowler said.

There was only one team that came out and opposed the protests to the Anthem, and that was “America’s Team,” the Dallas Cowboys.

“I do not think the place to express yourself in society is as we recognize the American flag,” Cowboys general manager and president Jerry Jones said to Fox Business, “So that’s not the place to do anything other than honor the flag and everybody that’s given up a little bit for it.”

Jones also threatened to “fire” anyone who sits during the Anthem.

He went back on his statement, however, when on Monday Night Football against the Arizona Cardinals, he and his team knelt to a chorus of boos.

Many fans were upset about their favorite team sitting during the anthem, shouting “Stand up,” or threatening to boycott the NFL because of this, but many people may not be aware of the reasoning for their protests.

Take the National Anthem. What many people don’t know, is that there is a third verse to the Anthem, that literally glorifies the death of slaves.

In the third verse of our National Anthem, there are lines that say:

“No refuge could save the hireling and slave

From the terror of flight or the gloom of the grave,

And the star-spangled banner in triumph doth wave

O’er the land of the free and the home of the brave.”

Many people also argue that sports should stay out of politics because the point is for the players to play a game, to entertain the audience, but that argument is flawed. If you’re saying that politics should stay out of sports, that means that in the 1940s, former Dodgers general manager Branch Rickey shouldn’t have tried to take a stance against the mistreatment of African-Americans, and signed some kid named Jackie Robinson, or the Olympics and Jesse Owens, or basketball with Michael Jordan and Magic Johnson. Boxing even made headlines in the 70s when Cassius Clay changed his name to Muhammad Ali, who received backlash for being an African American, now muslim boxer.

Even then, there have been reports of paid patriotism in sports starting in 2009. The first pitch, welcome home ceremonies, airplane fly bys, the puck drop, among other promotions were endorsed by the Department of Defense in “the oversight report,” which was created by Arizona senator John McCain, to promote military recruitment, according to NPR and the Washington Post.

Whatever you decide to do during the National Anthem, whether you stand, link arms, or kneel, or whatever, we have the freedom of expression, and it should not be reduced. But if you’re going to boycott the NFL because your favorite team because they knelt during the anthem, you’re not being progressive, but holding back freedom and the ability to protest.

Let’s remember that former quarterback Colin Kaepernick’s original protest was because unarmed African-Americans were being shot by police for unexplainable reasons.