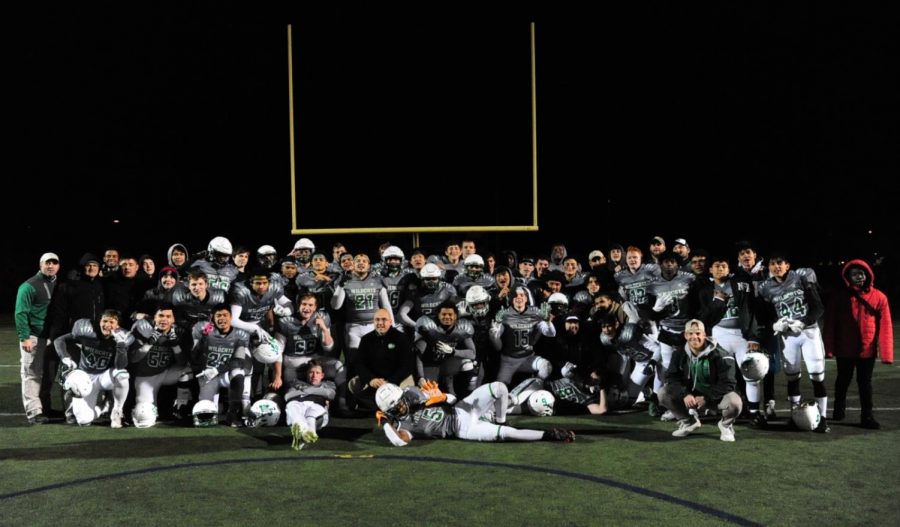 The varsity football team poses for a picture following their 42-10 win in the first round of the playoffs against Urbana on Friday, November 8th.

The Wildcats fell to the Quince Orchard Cougars in the second round of the Maryland playoffs by a score of 56-21 on Friday, Nov. 15, 2019. Despite the ultimate five-score margin of defeat, the Wildcats fought valiantly until there were double zeros on the clock. Senior quarterback Josh Forburger and junior running backs Ian Griffin and Aaron Jones were at the forefront of the offensive charge yet again. Griffin and Jones rushed for 73 and 101 yards respectively while one of Jones’ carries resulted in a score. In addition to Forburger’s 210 yards and one touchdown through the air, he added 71 yards on the ground on three carries and found his way into the end zone on a quarterback sneak in the second quarter.

Leading up to the Wildcats’ final act, the team felt energized and excited to be playing for a spot in the state semi-final round. Their second loss of the season just two weeks prior came at the hands of the same Cougars they were set to face off against, but that wasn’t weighing on anyone’s minds.

“We’ve been preparing for them all week and we feel like we have a really good game plan that will slow them down. Win or lose, we’re coming out swinging and we won’t go down without a fight,” senior safety Declan Stablow said.

Stablow and his teammates kept their word as the two teams exchanged scoring blows on their opening drives of the first half. Heading into halftime the Wildcats managed to stay close trailing by only two scores. Despite the indescribable fight that the Wildcats put up, the Cougars ran away with it in the second half.

The 2019 season was one for the record books as the Wildcats reached the playoffs for the first time in school history. They closed out the regular season with a record of 7-2, posting an average of 36 points per game while allowing only 20.7 points per game from opposing offenses. Forburger ended the year with 2196 passing yards, a county-wide high. He also tallied 22 passing touchdowns along with four rushing scores. Jones rounded out the year at third in the county for rushing yards with 1245 and 14 touchdowns. In only seven games, Griffin was able to fight his way to the 12th spot in the county for rushing yards with 719 and 12 total touchdowns. Senior wide receiver Kai Holloway’s (five touchdowns) 731 yards through the air placed him at fifth in the county while junior wide receiver Jose Cabrera’s (12 touchdowns) 665 receiving yards placed him at eighth in the county.

“What we accomplished this year… no one can take that away from us. This is a special group of guys and I wouldn’t trade those moments in the locker room and on the field for anything in the world. Gang green for life,” Forburger said.

The Wildcats truly did accomplish something special that cannot be taken away from them. This group of young men and their coaches successfully turned the football program around at a school where not too long ago it seemed as though the winning drought had no end in sight.

“Coming into the season, we knew what we were capable of doing. We knew that if we all played for our brothers next to us we would be able to prove a lot of people wrong and win football games,” Holloway said.