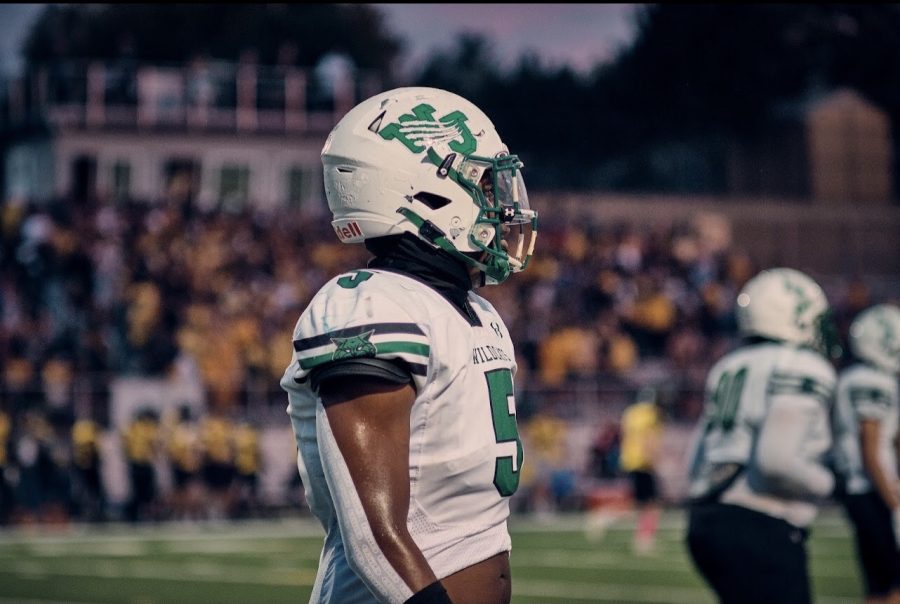 Senior Amir Frye takes the field on defense ready to make a play. Frye has played an essential role on the defensive side of the ball for the Wildcats in all of his three years on the varsity squad.

Senior Amir Frye isn’t your average high school student athlete. Frye started playing football in the third grade and hasn’t looked back since. The 6’3 231 lb defensive end and linebacker is truly special to watch on the field and a pivotal leader behind the scenes. Frye has a natural competitive drive that sets him apart from other high school athletes.

“It’s not just football, I really want to be the best at whatever I do and I put 100% into everything,” Frye said.

While he essentially has the build of an NFL player in just his senior year of high school, that obviously wasn’t always the case. He made it happen with his unmatched drive.

“I started hitting the gym around seventh grade and I put my all into every workout, I just gotta remind myself that progress doesn’t happen overnight,” Frye said.

In years past, the WJ football program wasn’t as elite as it is today. Consistently finishing with a record below .500, a change in culture was needed. When Frye came into WJ, he started impacting the program almost immediately.

“His ability to make big plays motivates the other players on the team,” football coach Larry Hurd said.

After his only season of junior varsity football his freshman year, Frye came into his sophomore season ready for varsity action. In Frye’s second season he started on varsity and helped lead the team to a playoff berth and secure their first playoff win in the program’s history. On the field, Frye makes sure his presence can’t be ignored.

“I want to be in the back of the [opposing teams] offense’s head, I’m trying to put pressure on them every snap,” Frye said.

There’s no denying the incredible impact Frye has on the field and he’s more than just an elite player in the WJ football program, he leads the team by example.

“Seeing what Amir does on the field makes me want to go out there and play my best football,” defensive tackle Jesse Sadelson said.

Outside of football Frye can be seen hanging out with friends or researching cars, one of his passions off the field. With such a large frame, Frye may seem intimidating at first glance, but you can never judge a book by its cover.

“Amir’s easily one of the nicest kids I’ve met at WJ, he doesn’t step out of his lane and he treats everyone with respect,” senior running back Kenneth Dempster said.

Through his four year high school football career, Frye has built himself an impressive resume and hopes to play at the next level.

“A couple of schools have reached out to me and I’m blessed to have the option to play football at the college level next year,” Frye said.

Frye has received a division one offer from Morgan State paired with two division two offers, one from Frostburg and one from Fairmont State.