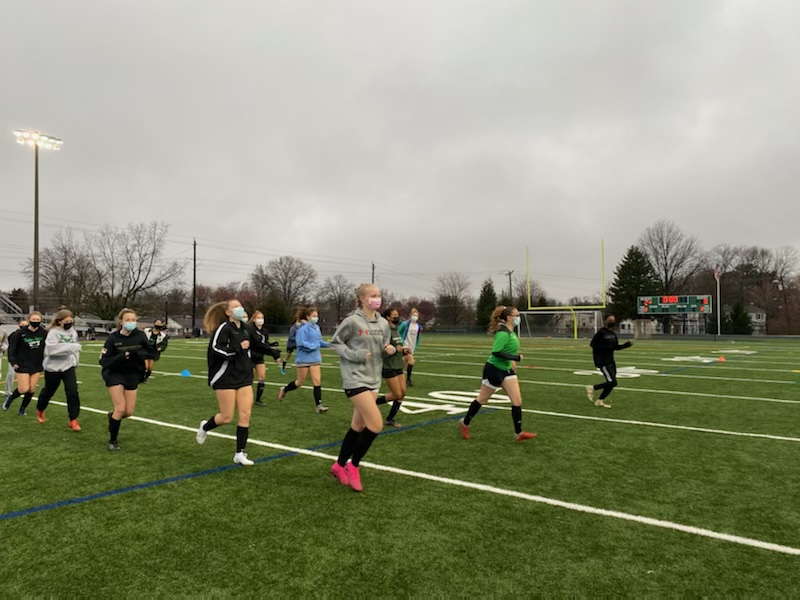 Girls varsity soccer completes their warm up jog before their game against BCC on April 24. The Wildcats lost 1-0 in overtime.

With a 2-0 win against Richard Montgomery on March 22, the varsity girls’ soccer team had high hopes for their other 4 games this season. But, 3/24 the team unfortunately lost a very hard fought game in overtime to BCC with a final score of 1-0. Circumstances are largely different for the girls to be playing under this year. Practices are looking different, which can lead to games looking different.

Practices this year are more laid back for the Wildcats because most people are still playing club soccer, where practices are very intense and wear down their bodies. The team practices possession drills and passing lines. They end practices with a light shooting drill. The most important thing for these girls to make sure they accomplish is getting a lot of stretching in, as many of the girls leave WJ practice and go straight to club practice.

In their first game against RM, the Wildcats did a great job of getting the ball up the field. For barely having any time to formulate true team chemistry, they did a great job of working together as a team despite losing 12 seniors from last year. The team also created a lot of struggle for RM by not giving them many shots on goal and doing a good job of possessing the ball throughout the match.

But, they did not play perfectly. Instead of trying to work the ball out of the backfield, there was a lot of frantic kicking and advancing of the ball that could have been done more carefully and effectively. The ball was focused on one side of the field for a lot of possessions for the Wildcats. This seemingly fatigued play may have resulted from a lot of players, including junior midfielder Sydney Stein, coming straight from a three day club tournament this previous weekend.

“My legs were very sore and I was very fatigued from my tournament over the weekend. I did my best to keep up my stamina, but I noticed myself getting tired a lot easier because of the tournament,” Stein said.

In their second game against BCC, the Wildcats had a pretty good showing of hustle and momentum throughout the entirety of the match. The girls had a ton of scoring chances through both halves, seemingly a ton more than the Barons. The Wildcats could not get past the Barons goalkeeper, but they held them to that same restraint, leading to an overtime period. The team looked very strong entering the overtime, moving the ball effectively down field and getting a few scoring chances early on.

But, the game ended with a Barons goal with about 4 minutes remaining in the overtime period. The Wildcats had a lot of missed opportunities throughout the game, with multiple corner kicks and free kicks that should have led to some closer scoring chances, even one if not two goals. Though she let in the game winning goal for BCC, goalkeeper senior Danielle Nevett did a great job of saving the team throughout the match when they had miscommunications on defense.

“Tonight was a really tough loss. Losing like that in overtime to our biggest rival is really hard, especially as a senior. However I think we were the better team tonight and we showed a lot of really good stuff for the future,” Nevett said.

Sophomore Vivian Vendt believes that these games are good for the team and as the team plays together more they will continue to improve.

“As the team progresses throughout the season our team chemistry will get better as we continue to better understand how each other plays,” Vendt said.

The girls went on to win their next game against Poolesville on 4/6 with an astounding 8-1 win. The Wildcats were the better team that night on both sides of the ball, and within every aspect of the game. The ball movement, the chemistry and finding opportunities led the Wildcats to this great win.

“Coming off such a good performance against poolesville will help our momentum going into our next game against QO who usually is a very challenging opponent,” Stein said.

The QO game turned out a lot better than many thought it would. The Wildcats ended up losing 2-1 in overtime. It was a hard fought game, with tons of physicality and heart from the Wildcat squad. The winning goal scored by QO was the result of a minor error. The scoreboard did not reflect the way the Wildcats played.

The girls did not get to play their full final game against Churchill on 4/12. During the game, the girls were winning but a thunder and lightning shut the event down. The game was then rescheduled but ended up being cancelled. The Wildcats showed promise for next year, incorporating many new young talents into their team this season. It seems that the four seniors leaving will not leave a huge dent in the success of this team. Girls soccer will be a team to watch next year.