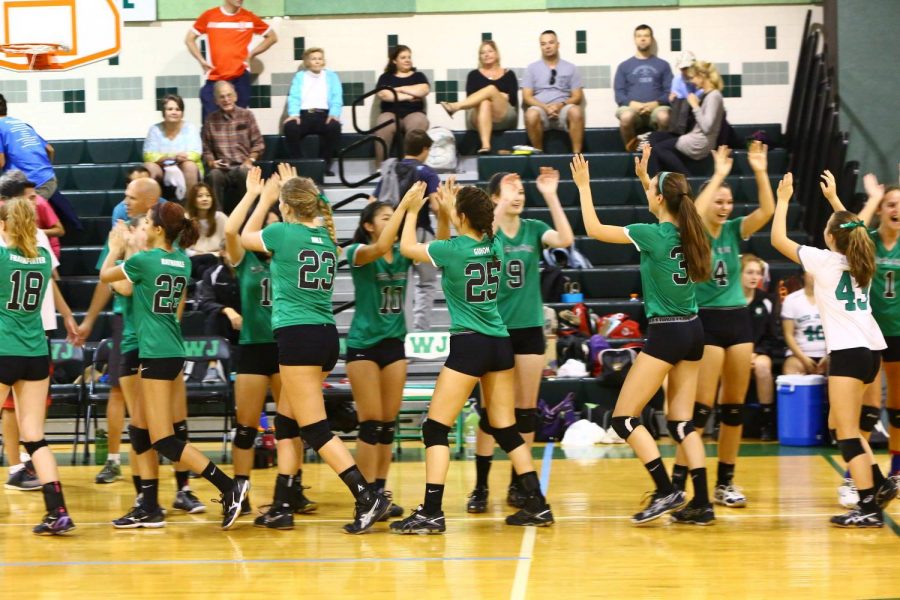 The Wildcat’s girls’ varsity volleyball team has been firing on all cylinders lately as they’ve won five out of the last six games they’ve played. They currently have a record of 8-4-1, rebounding in resounding fashion since their loss to BCC at the end of September.

On October 10, the girls’ volleyball had their annual “Dig Pink Game” at Walter Johnson. They welcomed the Rockets from Richard Montgomery High School in what would be an intense matchup. They girls’ won 3-1, but the sets were much closer than the final score indicated. From the first serve the game went back and forth; there wasn’t a shortage of hustle on either side. WJ won the first and second set, but just as it looked like they’d sweep the Rockets, the Rockets surprised the Wildcats and won the third set. The Wildcats then put the nail in the coffin by finishing off the Rockets with a dominant win in the fourth and final set.

After the Wildcats lost the third set, coach Tom Tepper weighed in and expressed his frustration.

“We need to play more consistently and finish the way we know we can,”Tepper said. “We can’t let the other team hang around.”

After the Wildcats secured the victory in the fourth set, senior Nezzy Dittmer had a positive outlook on the game.

“We stepped up big time in the fourth set,” Dittmer said. “We were able to come together and finish the game strong.”

WJ then traveled to Churchill to take on the Bulldogs; however, that’s where the girls’ four game winning streak came to a screeching halt. The Wildcats were shut out as the Bulldogs won 3-0.

In a blockbuster matchup featuring two stout teams,  the Wildcats marched into Sherwood High School to face the 8-2 Warriors, who have been dominant all season. After losing the first set, the girls came roaring back and won the next three to defeat the Warriors in the best of 5 set 3-1.

Last season, varsity volleyball finished with a record of 10-7. They already have eight wins. With only two games left, the girls are now making the strides to make another playoff appearance. Volleyball’s next game will be an away game on October 23 at home against the Eagles of Seneca Valley High School. Seneca Valley will come in with a record of 2-9, having been shut out the last seven games.