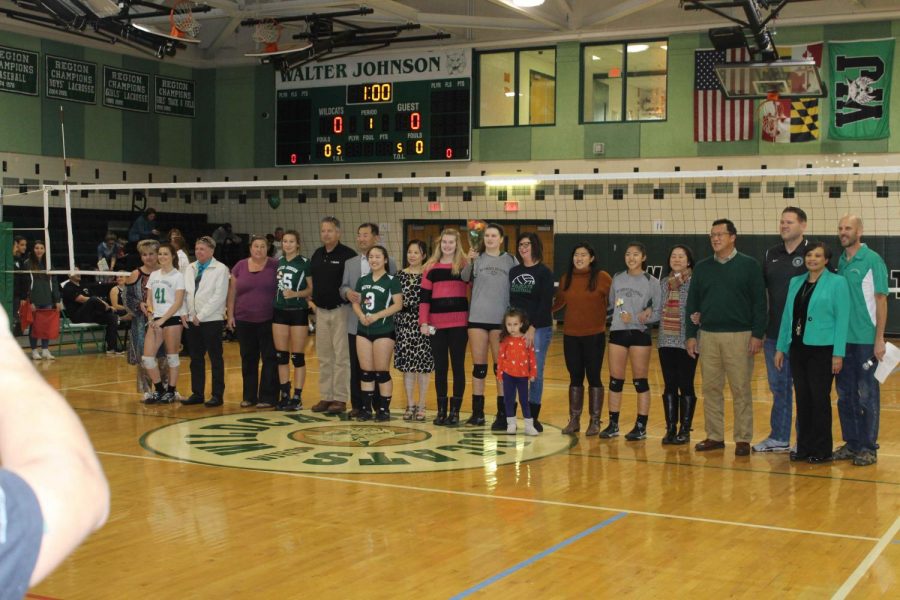 The girls’ varsity volleyball team finished their regular season, 10-4-1, winning eight of the last 10 games.On Thursday, October 26, the Falcons of Poolesville came WJ to take on the Wildcats on what would be an emotional, yet fantastic senior night. The girls smashed the Falcons 3-0 in the best of five series. The Wildcats played a tremendous game allowing less than 10 points twice.

One of the standouts was senior Jessica Lee. Lee scored the winning point in all three sets. It was a great atmosphere for Lee as she shared her thoughts playing on senior night as a senior with such a crucial role on the team.

After finishing a strong regular season, the girls now turn their attention to the playoffs. Something they’ve had their eyes on for a while. The girls, led by coach Tom Tepper, improved week by week and now will compete in the playoffs where anything can happen.

The Wildcats’ first opponent in the playoffs will be Albert Einstein High School on Thursday, November 2. . The girls beat the Titans earlier this year when they shut Einstein out 3-0. Lee weighed in on what the team should do to get ready for playoffs.

“We have to stay loose, we understand that we’re going to be put under a lot of pressure,” Lee said. “In order to do well we just have to go out there, play our game, and have fun.”

Tepper is also staying positive leading up to Thursday’s showdown.

“We’ve really been playing well as of late, we just need to focus and keep doing the little things right. If we can do that, we’ll definitely have a good shot to do what we want to do,” Tepper said.