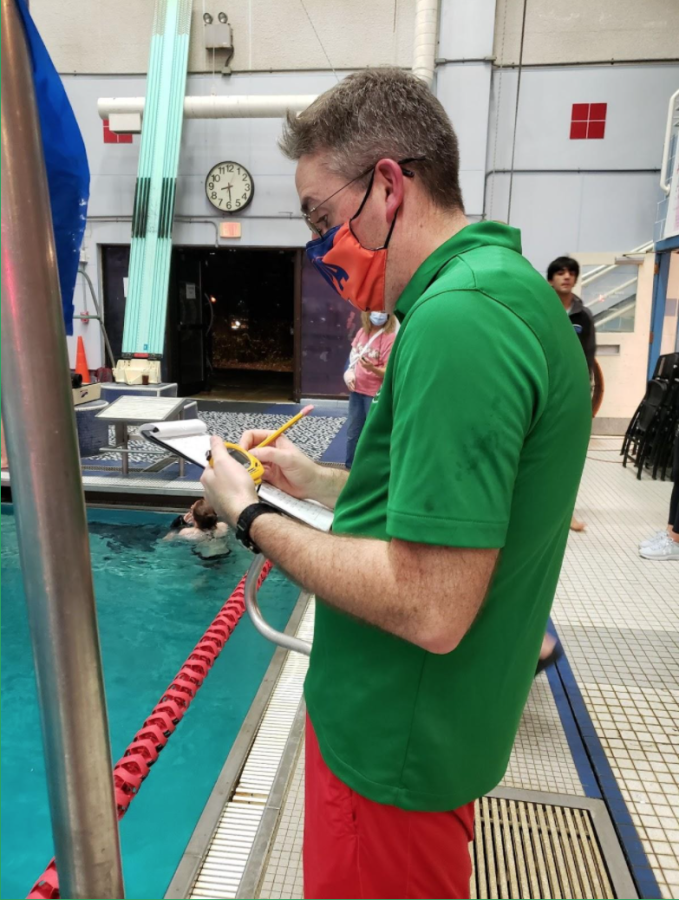 Grimes records swimmers’ times at the meet against Walt Whitman HS on Dec. 11. He is known for his uplifting attitude toward his team. “Before your swim [at the meets], he’ll prepare you for your race and tell you what you need to do,” swim team captain senior Graham Rogers said. “He’ll cheer loudly during your swim and congratulate you when you’re done.”

Every Tuesday, swim and dive coach Jamie Grimes wakes up before dawn and drives to the Kennedy Shriver Aquatic Center, where he joins swimmers and divers at 5 a.m. at the swimming pool. As the swimmers jump into the water and start their laps in different strokes, Grimes paces along the side and watches their practice. When the swimmers complete their laps and gather around him, he gives his technical feedback and explains the swim practice set.
Grimes, who is also a science teacher, has been coaching the WJ Swim and Dive team for 19 years. The team practices twice a week on Tuesdays and Thursdays.
Before he became a coach, he was an outstanding swimmer himself. He started swimming at five years old and since then, swimming has become a crucial part of his life. He was on the swim team at Sherwood High School and the University of Virginia at the national level, qualifying at the Olympic Trials in 2000 and 2004.
After retiring from swimming, Grimes assumed a coaching role at the Rockville Montgomery Swim Club. In 2003, he also became the WJSD head coach, a role that brings him closer to students who have the same passion for swimming as himself.
“I enjoy seeing the students and getting to interact with them outside of school. High school swimming has a sense of community and creates a fun atmosphere,” Grimes said
Grimes’s main responsibilities as the WJSD coach include making the line-ups for the weekly meets, hosting the biweekly practices and coordinating with parents to carry out events like breakfasts after morning practice.
At each practice and meet, he gives advice and feedback to the swimmers so they can work through their weaknesses.
“I try to help people out because I have the experience myself and I pass on what I know,” Grimes said.
Grimes has high hopes for his team this season. “We have a very good girls team this year. I hope they can represent WJ well and succeed as much as they have in the past,” he said.
Although WJSD had a hiatus from the COVID-19 pandemic, Grimes wants to focus on getting everyone both mentally and physically prepared for competition. “I expect the level of intensity and the level of competition to be the same as before,” Grimes said.
Under his guidance, the swim team has been successful in the dual Montgomery County high school swim meets that started in early December.
“[Coach Jamie] gives great stroke feedback,” swim team captain senior Graham Rogers, who has been on the team for four years, said. “And he emphasizes that swimming in WJSD isn’t as much about fast swimming as it is about creating a collaborative team environment where everyone feels welcome.”
Junior Grace Hudalla has been a swimmer in both Grimes’s club swim team and WJSD since freshman year.
“Jamie’s really funny, outgoing and nice, and he’ll always be there for you,” Hudalla said. “I’ve enjoyed being a part of our team because of my teammates and his great coaching.”
WJSD garnered their first win on Dec. 11 at a meet against Walt Whitman HS for both the girls and boys teams. Grimes expects to have a competitive and lively season for the swimmers. His message to all of them: “Have fun and swim fast.”