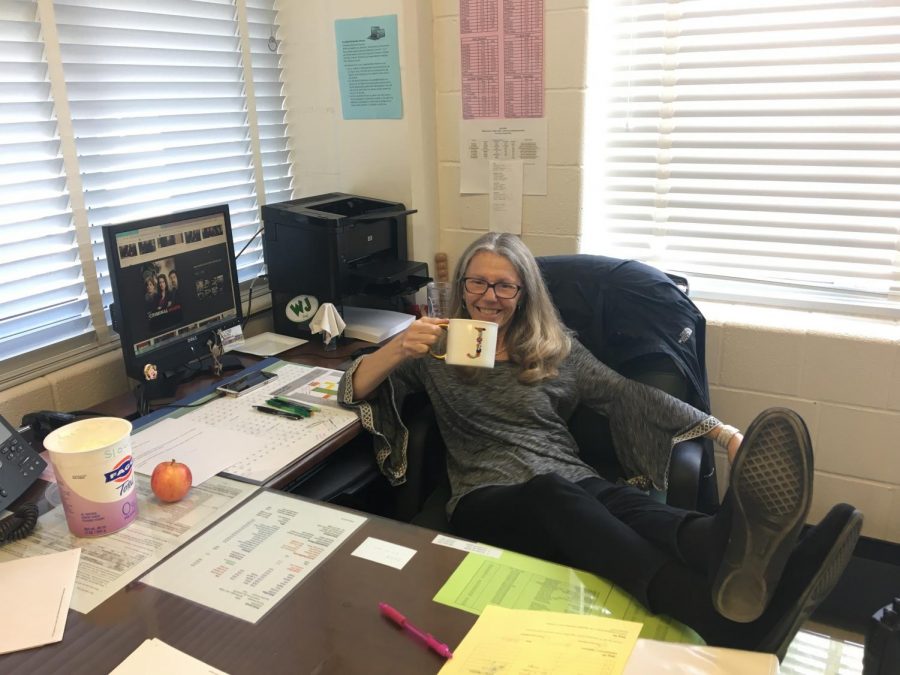 Administrator Janan Slough relaxes behind her desk instead of doing work. She is an avid fan of Criminal Minds and watches four episodes every day.

The widespread case of senioritis has affected many, far and wide, but the latest to catch the cold is none other than Janan Slough – yes, you heard that right. After 24 years of hard work and dedication to her job at WJ, Slough has finally reached her breaking point.

Students and teachers first started to notice symptoms back in August, when Slough demonstrated rowdy behavior at the Class of 2019 senior picnic. She apparently blasted Snoop Dogg’s hit song Young, Wild & Free through her speakers while painting “SEN19RS” all over her car. Most seniors believed Slough was having an identity crisis, but they weren’t too concerned. That all changed, however, when they heard that she didn’t come to the first day of school.

“We were at my beach house in Dewey during Labor Day weekend. We hung out by the beach, woke up early to see the sunrise, and took funny videos with that huge crying baby face mask,” senior Marlee Smith said. “Most of us drove back home on Saturday, but Slough took the house keys and stayed an extra night. She told me she would catch an Uber on Sunday and be back at school for the first day, but she never showed.”

Things only escalated from there. Slough was later caught arriving late to school with her sweatpants and Ugg slippers on. She’s been seen Snapchatting in the hallways and Principal Jennifer Baker even caught her watching Criminal Minds behind her desk instead of doing work. The situation in August raised concerns and her tardy habits prompted suspicions, but students and staff are now confident that senioritis is to blame for Slough’s sudden behavioral change.

“I’m really worried about Ms. Slough. The other day, she pulled me out of class to say happy birthday. My birthday was in December. I told her that it wasn’t my birthday, but I doubt she heard me with those airpods in,” senior Julia Rose said.

According to yearbook staff, Slough even won the ‘Biggest Case of Senioritis’ superlative by a landslide, beating both Maddie Terry and Raphael Leslau. Despite not being a student, Slough was invited to be in the photo. She never showed up.

“Senioritis, man. It happens to the best of us,” Slough said.