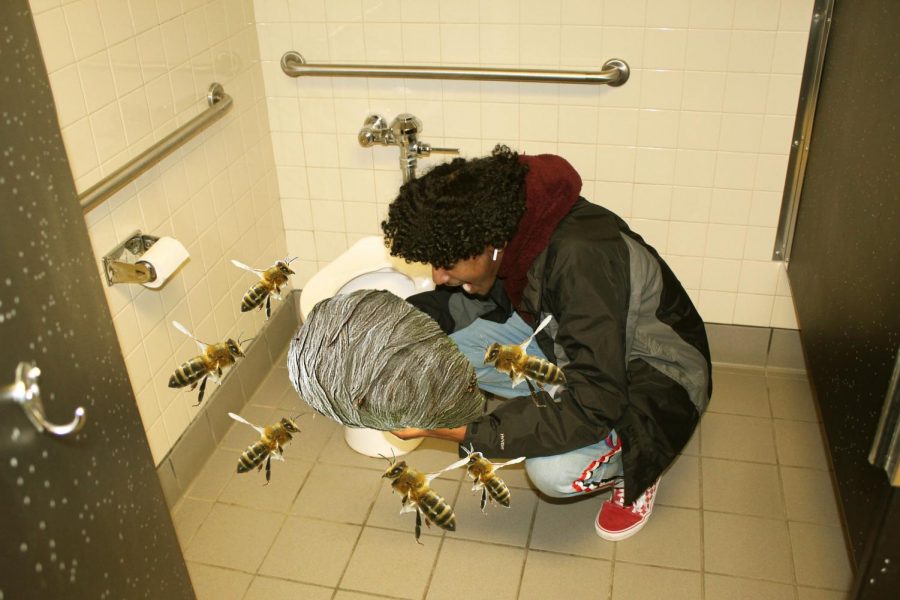 When leaving fourth period to go the bathroom, senior Bennett Wright noticed something unusual about his favorite women’s bathroom. Upon entrance, Wright noticed an unusual buzzing noise coming from the back stall.

“It was unlike anything I had ever heard,” Wright said. “I was so frightened, I almost had an aneurysm.”

“There were literally bees everywhere,”Wright said. “It was honestly the most beautiful thing I had ever seen.”

Mesfein was hunched over “like an animal”, and taking mouthfuls of the honeycomb. Despite being supposedly stung several times by a colony of bees, Mesfein seemed to be “unphased” by the matter.

“It was looking pretty tasty actually,” Wright said, “But when I asked to have a bite, Yoni just responded speaking in tongues.”

After a Snapchat was posted on Wright’’s story of Mesfein eating his most peculiar snack, security was quickly notified, and seized the beehive.

“I honestly have no memory of the events,” Mesfein said “After finding the beehive under my desk in micro [economics], I kind of went in a trance, and before I knew it I was in a straight jacket.”

Mesfein was ultimately suspended for his disturbing acts of consumption, and was treated for multiple bee sting wounds on the inside of his mouth. Further investigation revealed that this was not the first time Mesfein had fancied beehives before. Several anonymous witnesses came forward and spoke out against Mesfein’s evil acts.

“In once saw him grilling a beehive near a sewer and eating it,” one source said., “It made me ‘pee’ my pants.”

Another source mentioned that they had noticed Mesfein at Georgetown Square during lunch distributing honeycomb and bee samples to WJ underclassmen. While Mesfein denies these allegations, the testimonies by anonymous students could prove to be his downfall.

In more recent events, animal rights activist organization, PETA (People for Ethical Treatment of Animals), is filing lawsuits against the student, for “literally eating a beehive.” PETA followed  with a statement claiming that his acts, “violated animal cruelty laws, as well as basic human decency.”

Despite what many might think, Mesfein is not ashamed of his incidents in the bathroom.

“Regardless of remembering it or not, it sounds pretty legendary… I would definitely try it again,” Mesfein said.

Patrick Markey is a dirty liar. Do not, even for a second, believe anything that comes out of this hooligan’s mouth. For one, he hasn’t showered since the seventh grade (don’t fact check me, just take my word). Patrick currently has a 12 percent in his Pitch class and is trying ever so desperately to get his grade up with this heap of bologna.

For starters, I’m allergic to honey. Bet you didn’t see that one coming, did you? Even if I wanted to, for whatever twisted reason, take a bite into a beehive, my throat would swell up and I would immediately start speaking in tongues. I would never put myself or any colony of innocent bees through that. I refuse to let a Markey slander my name like this. Okay, maybe Willum. That kid is funny. But Patrick? No way Josephina.

“Well, what about the pictures?” some may ask. Patrick is in AP photography and has been working with Adobe Photoshop ever since people realized they could sell bread pre-sliced. Now if that joke went over your head, which I will not blame you if it did ( it was poorly timed and poorly executed), it means he knows how to make a picture look like something that it’s not. He clearly photoshopped that picture of me to make it look like i was eating a beehive when in fact I was finishing my business in the MEN’S BATHROOM, and threw a Quakers chewy bar at my feet. He knew I was a sucker for some good oats and he mocks me with a plastic bag full of them everyday. I pounced on my only opportunity to enjoy what he has been hanging over my head for the entire year now, and before I knew it, the camera clicked and the damage had been done.

I tried to wrestle him for the camera but everyone knows that Patrick Markey was held back four times in elementary school and is actually a 23 year old man, hence his full beard in the ninth grade. I didn’t stand a chance, and to make matters worse, he took the half eaten granola bar from my hands and finished it in my face. Never in my life have I experienced more rage in my life, besides today. I will enact my revenge. Someday, somehow, I will teach Patrick that he made the biggest mistake of his life. You better sleep with one eye open Markey, cause I’m coming for you.