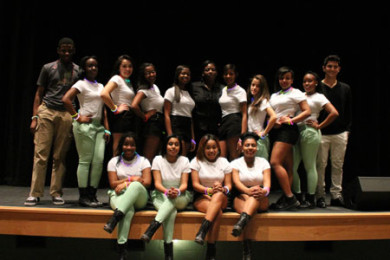 The BSU poses for a picture after their assembly.

On Feb. 28, WJ’s Black Student Union (BSU) honored National Black History Month with its annual assembly that had previously been held during a double third period in years past. However, due to a new policy regarding student assemblies, the show occurred during an extended lunch period resulting in lower attendance.

WJ Jazz Ensemble kicked off the event, setting the tone for the rest of the show. The auditorium then came alive during Pop Fly show choir’s performance of The Jackson 5’s “ABC” and “I Want You Back.”

The main highlight of the assembly was a routine by the Step Team. The girls stomped their way on stage with neon glow sticks and the performance got the crowd out of their seats and roaring.

Between performances, slides were presented honoring famous African-American figures from the 20th Century.