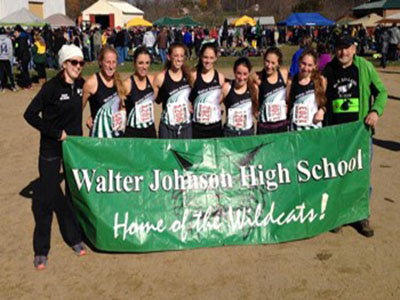 Girls Cross Country ended their season by winning the state championship for the second year in a row.

The boys and girls cross country teams finished sixth and first, respectively, at the 4A State Championships meet on Nov. 8. It was the girls’ second straight state title as freshman Abigail Green, junior Emily Murphy and sophomore Katrione Kirsch all finished in the top ten individually. The boys, who won four straight state titles from 2008-11, were led by senior Itai Bezherano and senior JP Burklow, who each finished in the top 35.

“The season was fantastic,” said Burklow. “We really came together as a team, and bonded really well with each other.”

Burklow plans to continue his running career into college, where he has applied to several NCAA Division 3 schools, including three within the state of Maryland.

“[I’m also applying to] SUNY Genesco in New York, one of the top running schools in Division 3,” he said.

Both teams started the season well, with the girls winning the Woodward Relays at Georgetown Prep High School and the boys finishing second. The girls won four more meets in the regular season, including the Bull Run Invitational’s Varsity Elite race and several wins over local rivals such as Walt Whitman, Thomas S. Wootton, and Bethesda-Chevy Chase. The boys triumphed in the Large Varsity race at the Bull Run Invitational and the Varsity F race at the Manhattan Invitational in New York City. However it was a different competition entirely that caught the eye of sophomore runner Jacob Tycko.

“The Oatlands Invitational [was my favorite meet] because we got to go to Virginia and compete against more than 50 other schools,” Tycko said. “It was also a very scenic and beautiful course.”

Once the playoffs began, the girls caught fire, winning the county, regional and state meets.

“It was a very successful season,” said sophomore runner Camille Hoffman-Delett. “We won many meets and everyone improved over the course of the season.”

The boys finished fourth in the county and region and sixth in the state, but still see their season as a success.

“It was a great year,” said Tycko. “Everyone worked really hard, but also had fun.”

A big part of the team’s success is head coach Tom Watson, who won the 2012 cross country coach of the year award from “The Gazette.” He is very popular amongst the runners.             “Mr. Martin is a great coach,” said Tycko.

Hoffman-Delett said he agrees that the coaches do a good job of supporting the team.

“The coaches… are all so fun and supportive,” he said. .

Both Tycko and Hoffman-Delett plan to continue running for the rest of high school, partly because of the great coaching they were exposed to at WJ.

“My favorite part [of Cross Country] is how, with enough heart and hard work, [anyone] can become the greatest person on the team… based off of how hard you work you can become the best,” Burklow said.

“[I most enjoy] going on long runs as a group… it’s a time to talk and joke around while still doing the work were supposed to do,” he said.Hoffman-Delett agrees that the team is very bonded this year.

“My favorite thing is how close everyone on the team is… no matter how fast you are, your teammates will always be cheering for you throughout the race,” he said.

With a combination of competitive success and athlete enjoyment, cross country is riding high.