DC protests give voice to the concerns of students 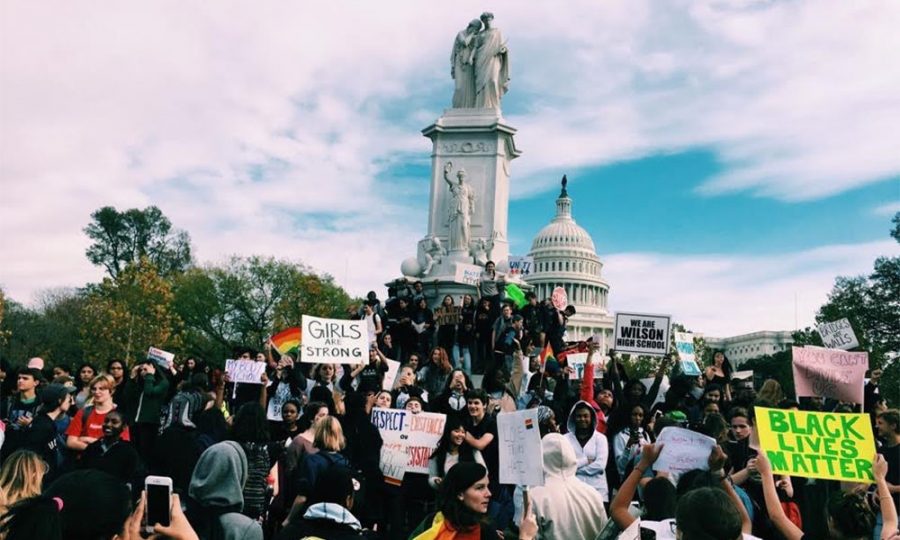 Hundreds of students from all over the DC metro area rally in front of the Capitol building to protest Donald Trump's policies and behavior. Photo courtesy of Rachel Rosenheim.

As soon as the results of the presidential election came out on November 8, protests started throughout the entire country. Thousands of people, many of whom are racial or ethnic minorities, women, and/or members of the LGBTQ+ community, took to the streets to voice their disapproval with Donald Trump’s unpredicted victory. On Tuesday, November 15, hundreds of students from DC and Montgomery County, including myself and other students from Walter Johnson, joined the national protests and marched in DC in protest of the election.

However, there are many people from both sides of the political spectrum who do not support these protests, and who think that these protests are unnecessary or even harmful. I vehemently disagree.

Some say that students and people who didn’t vote shouldn’t be protesting. I say that everybody, no matter how uninvolved they were two weeks ago, has the right to voice their opinion, and that this goes doubly for students, who have no way of making a difference other than protesting.  Some say that the election is over and protesters need to accept the results. I say that the first amendment in the Bill of Rights in the Constitution gives us the right to assemble to express our opinions. It’s not just our right: it’s our responsibility as citizens of the United States to come together and protest against injustice and inequality. Some say that Trump hasn’t done anything yet, and we should wait to see if he’ll actually do all the things he said before we protest. I say that we cannot wait until the worst happens; we have to fight to make sure it never comes to that. Some say that the protests only divide the country even more, when what we need is to be united. I say that the protesters are not the ones who divided this country. The country was divided when almost half of its voters decided to elect a xenophobic, bigoted sex offender, and it shouldn’t be up to us to accept their hate.

When I walked out of school on Tuesday and joined the hundreds of students protesting in DC, I didn’t see the violent, uninformed, pointless “complaining” that some people try to describe it as. I saw a strong community come together to fight for the protection of their rights. I saw huge crowds, armed only with signs, banners and their words, flooding the streets and marching for hours to make sure their voices were heard. This isn’t a useless tantrum. This is democracy.