Chance The Rapper brings Be Encouraged Tour to DC area 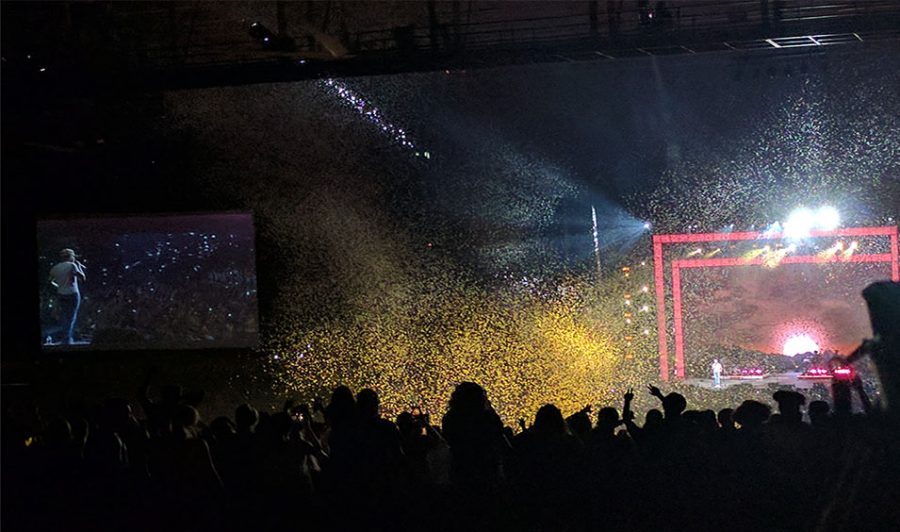 Twenty-three thousand fans converged on Jiffy Lube Live in Bristow, Va. on the night of Sunday, June 4 to witness Chance The Rapper bring his latest mixtape Coloring Book to life alongside his band The Social Experiment. The show was one of 39 stops on Chance’s spring 2017 Be Encouraged Tour, the second tour in promotion of Coloring Book.

Chance has been very busy the past year. He began 2016 with one of the most popular verses from Kanye West’s The Life of Pablo; released his third and most recent mixtape Coloring Book in May, held the first ever music festival at Chicago’s U.S. Cellular Field, known as Magnificent Coloring Day, in September, and embarked on the Magnificent Coloring World Tour with Francis and the Lights during the fall. Chance isn’t slowing down this year. At the 2017 Grammy Awards, he took home three Grammys, including Best Rap Album for Coloring Book, the first and only streaming-only project to win a Grammy. He appeared on DJ Khaled’s “I’m The One,” his first Billboard No. 1 single, alongside Justin Bieber, Quavo, and Lil Wayne, and as stated, is now in the middle of his second tour in promotion of Coloring Book, the Be Encouraged Tour.

“[The Magnificent Coloring World Tour] seemed much more formal and had a different vibe than Jiffy Lube did,” Katia Goldberg, a junior at Walt Whitman who attended concerts during both tours, said. “The atmosphere was all people who loved Chance, when I feel like at Jiffy Lube it was a lot of people who just went because it was a concert.

The Be Encouraged Tour features an opening act from another Chicago rapper named King Louie. Louie and Chance have collaborated previously on 2015’s “Familiar” from The Social Experiment’s album Surf. This song completely stood out in the middle of Louie’s half hour set, the only song to feature live instrumentation instead of 808s and noisy, redundant hooks. Louie also performed “Send It Up,” his collaboration with Kanye West from 2013’s Yeezus. Following King Louie was a less-than-stellar hour and a half DJ set from DJ Oreo. Oreo played an extremely wide variety of music during his set, ranging from Kanye and Kendrick to throwbacks like Michael Jackson to completely overplayed radio hits like Lil Uzi Vert’s “XO TOUR Llif3” or Migos’ “Bad and Boujee” to complete curveballs like the “Little Einsteins” theme song or Adele’s “Someone Like You.” Overall, his set was completely incohesive and was not what would be expected from a DJ that’s supposed to be good enough to have his own hour and a half set to hold the crowd over between the only opening act and the headliner.

Chance finally took the stage around 10 PM to “Mixtape,” the most conventional sounding song on Coloring Book. With an unexpected amount of showmanship, Chance rode on stage on a motorcycle surrounded by pyrotechnics and disorientingly loud sound effects. In one of the weirdest transitions of the night, he immediately followed “Mixtape” with the significantly slower-paced and lower-energy track “Blessings,” a song about religion, without even stopping for breath. After a few more songs from Coloring Book, Chance covered Kanye’s “Waves,” “Father Stretch My Hands Pt. 1,” and “Ultralight Beam,” all from The Life of Pablo and all of which Chance had a hand in creating. It wasn’t until about halfway through the night that fans heard a song from 2013’s Acid Rap when Chance performed his Childish Gambino-assisted track “Favorite Song” back-to-back with the nostalgic fan favorite “Cocoa Butter Kisses.” He didn’t perform any other songs from Acid Rap that night.

“I thought he was good live, I didn’t expect him to sound that good,” freshman Cara Demitz said. “At a lot of concerts that I go to, the artists don’t really sound that good in person.”

Chance continued the show with a plethora of Coloring Book songs including “No Problem”, “Summer Friends”, and “Juke Jam.” Every song he played after the two from Acid Rap were off of Coloring Book. In fact, there were only two songs from Coloring Book that he didn’t perform  and in addition he performed “I’m The One” and “Sunday Candy,” an upbeat song about going to church and loving your grandmother from Surf. The closing track of the night was “Blessings (Reprise),” the outro on Coloring Book. In a fitting conclusion to the show, Chance showered the crowd in confetti as he sang his praises to his god and his fans for supporting him.

“I really enjoyed the energy of the crowd,” sophomore Thomas Garmen said. “It had a good mix of all types of people.”

Chance The Rapper put on a stupendous show at Jiffy Lube Live and continues to make waves in the music industry as arguably the most successful independent artist at the moment. He shines as one of Chicago’s brightest stars and amazes fans across the country with his showmanship and stellar performance skills.