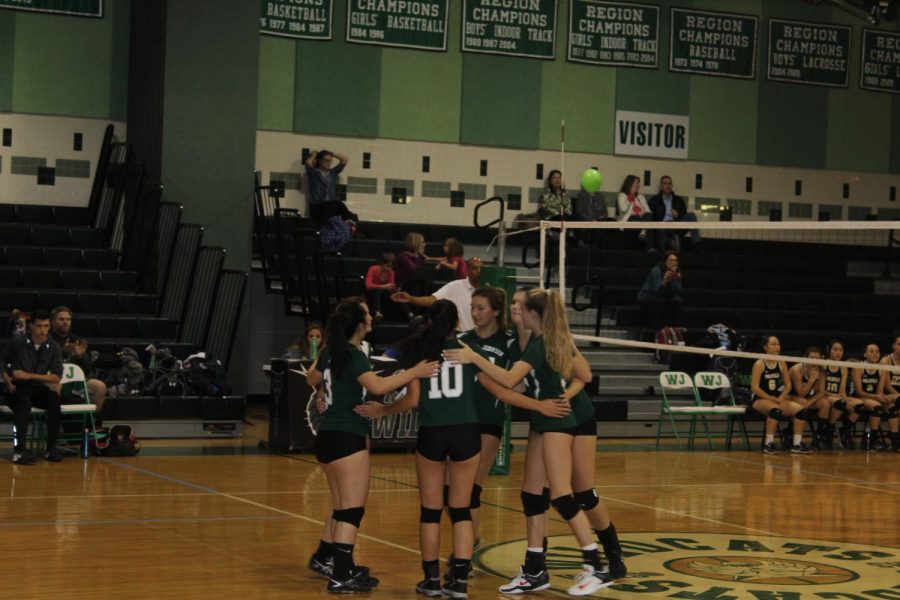 Girls’ varsity volleyball competed in their first playoff game on November 2 when they welcomed the Titans from Albert Einstein High School. Walter Johnson played them earlier this year and shut them out 3-0. This time around, the wildcats throttled the Titans and shut them out yet again. The girls put together a strong performance, not allowing more than eleven points per set.

Head coach Tom Tepper was pleased with the girls’ efforts as they contributed to a strong game.

“I was really pleased with the way we played in all three sets, there was no shortage in hustle and we earned the opportunity to play another week,” Tepper said.

On November 6, WJ went to Churchill for the second round of the playoffs to take on the number one seed in Winston Churchill High School. Last season, Walter Johnson lost to Churchill in a thriller in the second round of the playoffs. The wildcats got off to a great start as they won the first set with a score of 20-25. Unfortunately, the next three sets did not go the way WJ envisioned them. The bulldogs won the next three sets, but they were not easy victories. Walter Johnson lost by a final score of 1-3. The girls played a great game, and while the result wasn’t what they wanted, they still played their hearts out as they left it all out on the court.

Senior Nezzy Dittmer expressed her emotions as the season came to a close for the girls.

“It’s a bittersweet ending to a great season. We weren’t able to finish, but the experience was great. I’ll always treasure my memories with this team,” Dittmer said as her watery eyes glistened under the gymnasium lights.

The Wildcats’ season may be over, but they have a lot to be proud of, like winning eight of the final 10 games, beating quality teams such as Sherwood High School and coming together as a team to play to the best of their capabilities. The team bids farewell to a great senior class featuring Marissa Hill, Jessica Lee, Nancy Han, Nezzy Dittmer and Claire Guion. Next season, juniors Erin Szulmas and Sophie Lembo will be asked to step up to the plate. There are plenty of positives to build off of for next season.