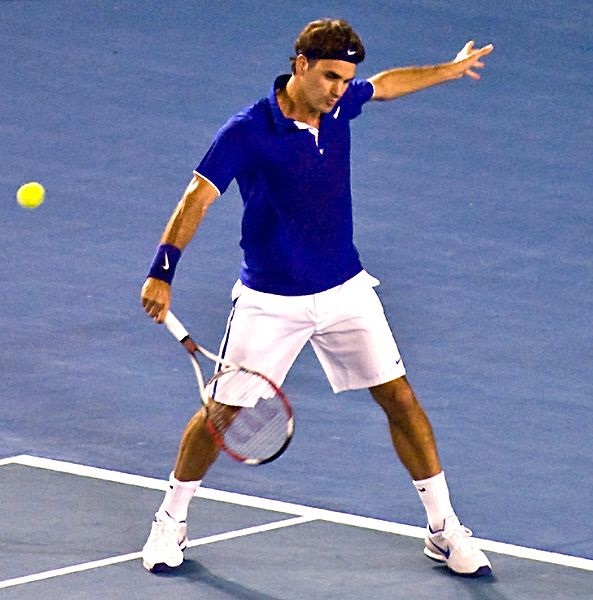 Federer hits a slice backhand in his finals run at the 2009 Australian Open, where he lost in the finals. Federer managed to turn things around this time, winning his 20th grand slam.

(On January 28, Roger Federer won his sixth Australian Open title, and his twentieth Grand Slam overall, further cementing himself in tennis history.  The win puts Federer in a three-way tie for the most Australian Open championships of all time, along with Novak Djokovic and Roy Emerson who also have six.  In addition, Federer became the first male tennis player to reach 20 career grand slams, extending his lead over Rafael Nadal who is second all time with 16.

Federer’s road to the final was fairly straightforward, as he beat all of his opponents without dropping a set.  But sixth seeded Marin Cilic posed a much bigger challenge for Federer.  Federer had just beaten Cilic last year at Wimbledon to capture his 19th grand slam.  In that match, Federer simply dismantled Cilic 6-3, 6-1, 6-4.  It was simply a masterful showing for Federer. But many tennis analysts were critical of Cilic for having what could only be described as a mental breakdown.  Cilic was seen crying during a changeover while he was getting treatment for blisters on his foot.  It seemed he wasn’t prepared for the big moment.  That would not be the case this time around.

It looked like it was going to be more of the same in the first set, with Federer cruising to a 6-2 victory.  But Cilic showed his newfound toughness in the second set, taking the set in a tight tiebreak, 7-5.  As usual, Federer was able to put disappointment behind him, winning the third set 6-3.  At this point, it seemed as if Federer was going to run away with the match.  He started off the fourth set strong, quickly breaking Cilic, and going up 3-2.  But uncharacteristically,  Federer lost focus and played a couple of loose points, perhaps looking forward to the finish.  Cilic took advantage, breaking back to tie the match at 3-3.  He proceeded to  rattle off three straight games to force a deciding fifth set.

Federer was tested in the very first game of the final set, as he faced multiple breakpoints on his serve.  But Federer persevered, and managed to hold serve.  From there, it was a one sided affair.  Cilic appeared to have run out of energy, and Federer took advantage, taking the final set by a runaway score of 6-1, to win his 20th grand slam.

Federer was overcome with emotion during the trophy ceremony, fighting to hold in tears, before finally breaking down as he finished his speech.

“The fairy tale continues for us, for me,” Federer said as he looked toward his player box, where his coach, family and friends were seated.

Fairy tale is an appropriate word for Federer’s run over the last year.  Heading into his age 35 year old season last year, many were counting Federer out.  He responded by winning two out of four grand slams.  With his 20th grand slam win at the Australian Open, Federer has not only established himself as the undisputed greatest tennis player of all time, but also as a force to be reckoned with in tennis for years to come.