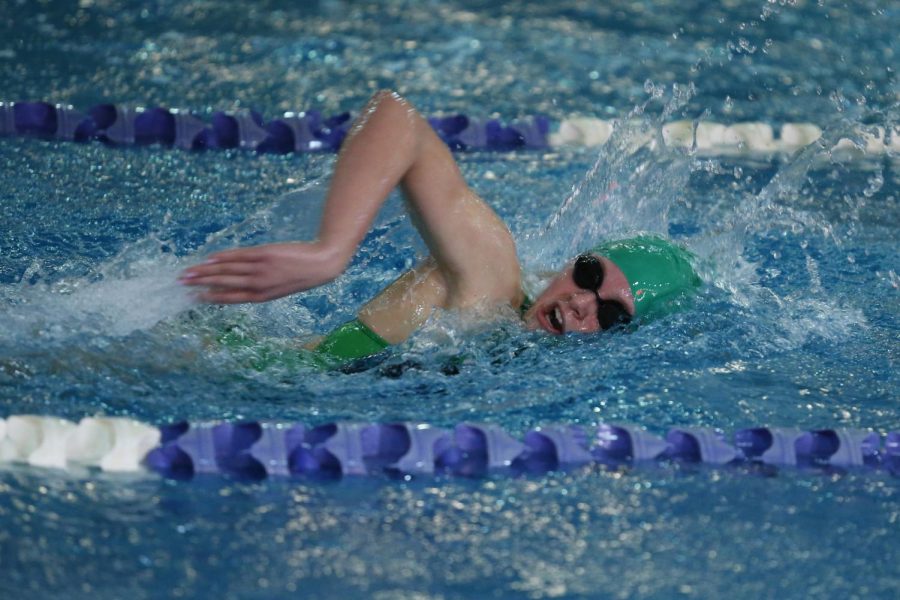 This year’s girls swim and dive team had a lot to live up to.  The team was coming off an undefeated season, where they won divisionals, metros, regionals and states.  Although this year’s team hasn’t been able to achieve that level of success, they have still had another productive year.  The girls finished with a 5-0 record in dual meets, and placed second in divisionals and first in regionals.

“We placed well at metros and won regionals,” Bonetta Misteli said.  “We had the best possible season.”

The girls will be losing two key seniors from this year’s group, Kiki Bonetta-Misteli and Athena Aravantinou.  But the team is still in good shape for the future, with junior Maya Drill, sophomore Molly Benson and freshman Jane Umhofer being among the impact swimmers returning next year.

Boys basketball finished their season with a 4-16 record. At the beginning of the season, the team developed a three win streak, but struggled to tap into their offensive spark and early success later on. They were not able to remain consistent on the defensive end throughout the year. In addition, they were plagued with many injuries, including junior Hank Roll, who was one of the team’s leading scorers before he got injured and after he returned.

Senior captain William Koenick and junior Jonathon Newman have also stood out this season with their incredible performances in multiple games. Senior captain Nick Bournias has faith in the team and believes they ended on a high note, despite losing the last few games.

“As our regular season comes to a close, we are really gathering momentum,” Bournias said. “I

have no doubt we can compete with any team in our conference.”

Boys’ swim has a rebound season

Boys’ swim and dive has made impressive strides this season, after going winless last year.  The boys managed a winning record in dual meets, finishing 3-2.  They’ve parlayed that regular season success into three solid postseason showings, finishing fourth in divisionals, sixth in metros and second in regionals with states still to come.

Perhaps the most impressive part of the boys success is that a lot of their contributions come from underclassmen.  Freshmen Henry Bagshaw and Jorge Otaiza have contributed right away, and sophomores Matthew Laclef, Patrick Connelly, and James Collishaw have also given the Wildcats big swims this year.  This young group is led by standout junior, Timmy Ellett who has established himself as one of the premier swimmers in the county.

“The boys, this season, had lots of improvement from last season,” Ellett said.  “Everyone always had a positive attitude and we all wanted to win.”

Girls basketball has had a great season this year. They are 14-5 overall and 7-3 in the conference tied for first place with Churchill and BCC. The Wildcats have been lead by star freshman Kristin Lucas who is averaging 17.9 points per game.

“Hard work and practice has been our key to success,” coach Jason Campbell said, “We’re gonna play hard and aggressive.”

Girls basketball has a young team, with just two seniors graduating this year.

“I think this team is amazing,” senior Katherine Papadopulos said, “There’s so much potential with these girls.”

“We are very excited for the playoffs and we know we can make it really far,” Papadopulos said.

Indoor track has a solid year

Indoor track had a fantastic season. Many runners were excellent this season, and the girls team even won the regional championships. In the process, three school records were set for indoor track. Junior Rodrigo Yepez-Lopez set the boys 3000 meter run record. Fellow junior Erin Henderson set the school records in the girls 55 and 60 meter dashes and senior captain Abigail Green set the record in the girls mile run. Although there were some exceptional runners this season, the main focus was on teamwork for track.

“I think one of the main things that pushed us to victory this season is the closeness of the team,” senior captain Janet Scott said. “We’re all good friends and we always push each other, cheer for each other and support each other,” Scott explained. This relationship between teammates and the teamwork and chemistry between all of track propelled them to a successful season.

Even though WJ Bocce lost all of their games, each player grew individually and gained better skills for the future. Bocce had six close games over the course of the season, where they worked on encouragement and sportsmanship.

A few other major focuses this season were accuracy, prestige and aim. During practices Bocce would take turns throwing the Bocce ball toward the Pallina ball, or the target ball. Freshman bocce player, Bridget Fannon also noted that she saw major improvement in her teammates.

“I think we did really well. We didn’t win all of our games, which is okay, but everybody differently improved”, Fannon said. “From the first game to the last game I definitely saw a lot of improvement in play.”

Coach O’Connor also noticed a substantial difference in the encouragement of the players as well as their quality of play.

“The students did well as a team supporting each other and I saw some great individual improvement,” O’Connor said.

Bocce will miss their seniors, but look forward to a great season next year.

Lot’s of wins for wrestling

Wrestling had a solid season overall, finishing with a record of 16-11. They had success in many of their weekend tournaments as well, including the “Best of the Nest” tournament back in December. On top of all of that they had some stand out athletes that had outstanding seasons.

Kemper Stearns came in second place at counties and Josh Bernstein came in 3rd. After this the wrestlers that placed in their weight class, Stearns and Bernstein, will move on to regionals and then potentially states, if they are able to place in regionals. Though the wrestlers agree the season had its ups and downs, the players grew a lot and came together as a team.

“It was a good season, though I wish I could’ve finished on a better note, but we really grew as the season went on. I’m really going to miss it.” Patrick O’Neill senior.