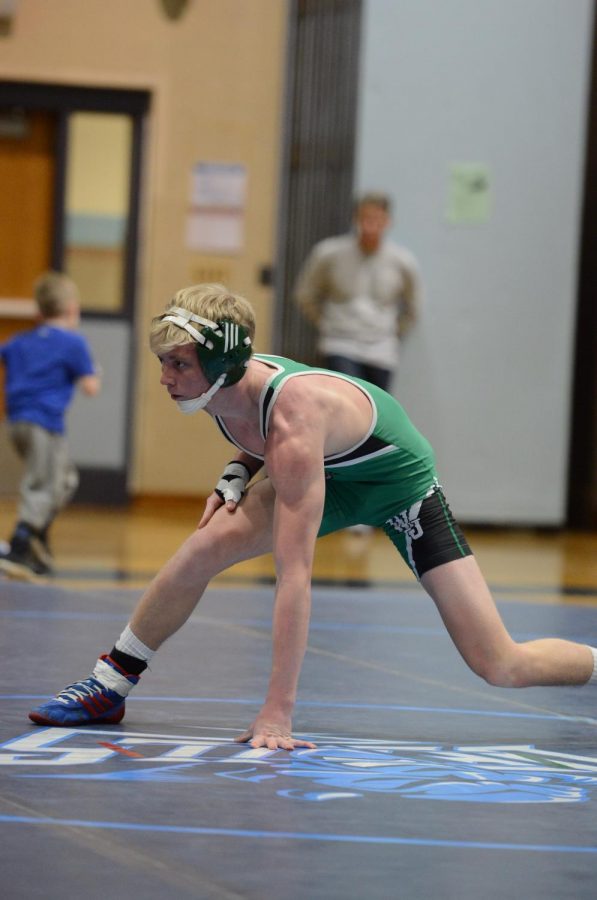 Senior Wrestler Kemper Stearns rises to his feet. Stearns placed second in the state within his weight class.

To cap off an already solid wrestling season, on the night of March 6, two of WJ’s wrestlers were able to place second in states within their respective weight classes. Senior Kemper Stearns and junior Jacob Bernstein worked hard all season to make it to the state title match and they were very close to bringing a state championship to WJ.

Stearns had won three matches within the state tournament bracket in order to make it to the finals and did so in rather dominant fashion. Stearns also nearly won the state title, as he had his opponent pinned on his back at the end of the first period. The timer expired, though, and the match moved onto it’s second of three periods. The second period was very close and by the end it was a tie match, 4-4. James Riveira, a freshman at C. Milton Wright, who had only lost one match this entire season, was able to outscore Stearns in the final round and win the match 6-4. Though Stearns lost a nail-biter in the state finals, he accomplished a lot throughout the season and has been an outstanding wrestler for WJ in his time here.

“Of course I wanted to win the whole thing and bring another title to WJ, but second is still really good for the program,” Stearns said. “I know I could have beat the kid but at the beginning of the year I never would have imagined that I would be in the finals so I’m pretty happy.”

Bernstein was also able to reach the state finals match in weight class 126-132. Bernstein wrestled at an extremely high level in the quarter-finals, winning by a score 9-4. He continued this momentum into his semifinals match in which he was able to pull out a victory in a very close match that ended with a score of 8-6. Then he moved on to his state final match against Earl Blake, who had a record of 44-1 going into this match. Though he was unable to secure the win against his highly capable opponent, Bernstein still had a remarkable season that he hopes to improve upon as a senior.

“It was awesome for Kemper and I to make it to back to back finals,” Bernstein said. “I am proud of getting second place but not at all content. For my senior season I am looking to improve in all aspects of my game so I can hopefully take home a state title.”

Regardless of whether they came in first or second, having two wrestlers make it to the state finals is fantastic for the program at WJ, and something about which  the school, as well as the students, can be proud.