Jake’s Take: Sports seasons are too long, but not too long 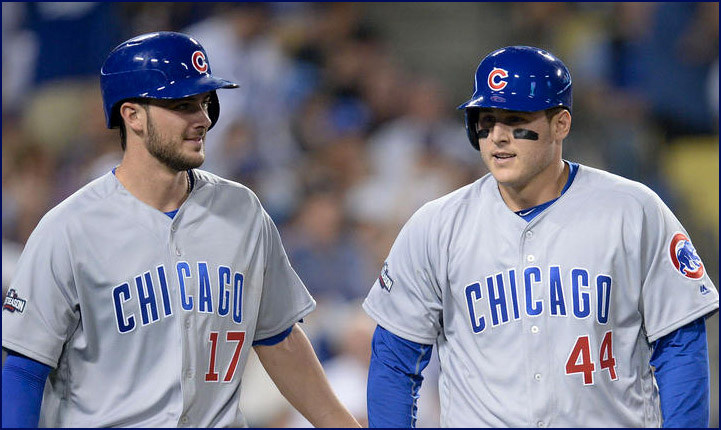 Cubs infielders Kris Bryant (17) and Anthony Rizzo (44) are the cornerstones of the Cubs offense. Rizzo believes that there are too many baseball games during a season. Courtesy of Ron Cogswell.

If you read my articles, you obviously like sports, whether it’s basketball, baseball, football or hockey, but recently there has been controversy about whether or not our favorite sport seasons are too long.

Cubs first baseman Anthony Rizzo brought this up in April, specifically about baseball.

“I think we play too much baseball,” Rizzo said. “Yes, guys are going to take pay cuts. But are we playing this game for the money or do we love this game?”

This is a fair point for pretty much any sport. Do they want the money, or do they do it for fun?

I read an article by Norman Chad of the Washington Post where he gave his opinion on this topic. He says that professional athletes “play too many games, and too many games are being played in rotten conditions.”

He compared this to watching movies outside, and how we fixed the problem by showing them indoors instead, (and then threw shade at how he said he’d never watch a Molly Ringwald or Keanu Reeves movie, about which I highly disagree).

He says that no one wants to watch a baseball game in April or May when it’s cold and rainy.

However, we can never control the weather. Some days will be rainy, cold, hot, and humid. Would you want to watch a baseball game in hot, humid weather? There have been many iconic games that were played in bad weather, especially in football with the Ice Bowl, the Fog Bowl and the Greatest Game Ever Played.

Unfavorable weather conditions can make baseball more interesting. You try and line base hits in to the gap to get runs, instead of hitting a fly ball in the hot humid conditions in August.

Chad also says that the overlapping of sport seasons can be annoying and frustrating.

“There’s just TOO MUCH going on – most of us don’t have the time, patience or aptitude to follow 37 different endeavors at once,” Chad says.

If you follow a specific sport, for example, basketball, you might not care about hockey or baseball. It does not matter to you. But if you’re like me where basketball and hockey playoffs are going on, and baseball is heating up, I’m gonna be excited and follow everything that’s going on with my favorite teams. It should be exciting not frustrating.

Despite this, I do agree with Rizzo. They do play too many games. They should go back to the 154 game season like they used to. But baseball, and other sports, are just the right length. If you don’t like it, just only watch your favorite team.