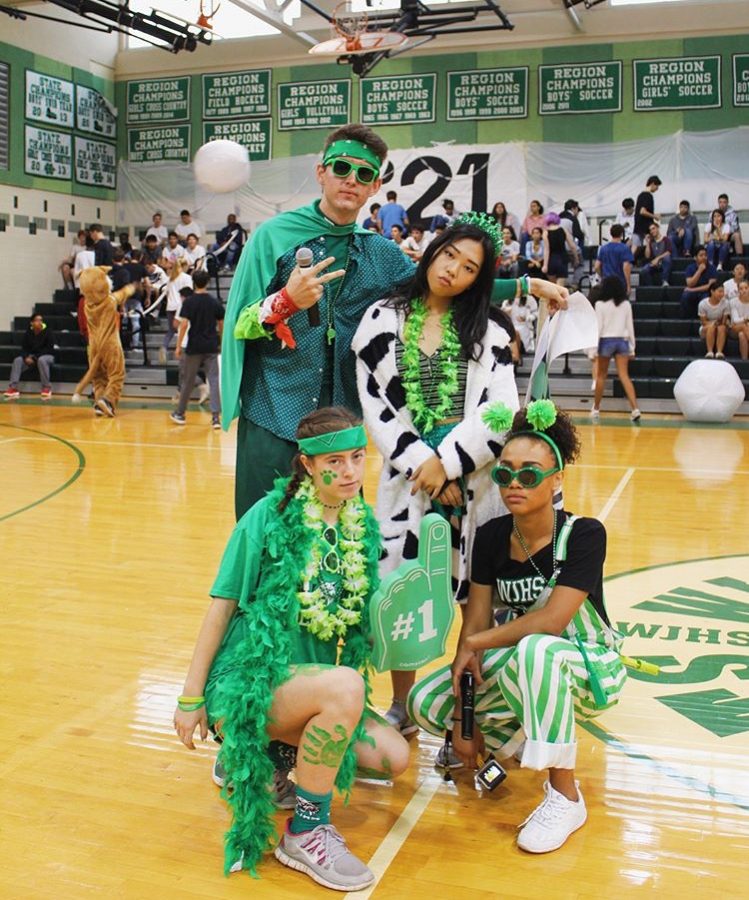 The 2018-19 SGA poses before the year's first pep rally. They hope to bring excitement to WJ this year, and the first pep rally definitely showed that they are capable.

This year’s fall pep rally was a success, as SGA had everyone hyped up. Fall sports were announced and celebrated at the first pep rally of the year last Friday.

Throughout the pep rally, there was high energy from the students, as everyone was cheering nonstop. The seniors demonstrated their excitement and pride by standing up the entire time.

In the middle of the rally, the Wildcat and Madcow mascot went head-to-head in a skills competition to determine the superior mascot. This consisted of getting themselves dizzy by spinning around, then seeing who could get the basketball in the hoop first. After some hilarity and mess ups on the part of the two mascots, the Wildcat emerged victorious. Later, the poms and cheer teams performed fun routines for the whole school, which was a crowd favorite.

“I always love to watch the cheer team perform, they are so entertaining,” said sophomore Callie Metzman.

At the end of the pep rally, all the seniors came down from their sections and created a mosh pit in the middle of the gym, showing off their spirit and anticipation for the upcoming year.

“It was by far the best pep rally WJ has ever had. This year’s SGA really knows how to get a crowd going,” senior Sam Heald said.
(function(d,s,id){var js,fjs=d.getElementsByTagName(s)[0];if(d.getElementById(id))return;js=d.createElement(s);js.id=id;js.src=’https://embed.playbuzz.com/sdk.js’;fjs.parentNode.insertBefore(js,fjs);}(document,’script’,’playbuzz-sdk’));