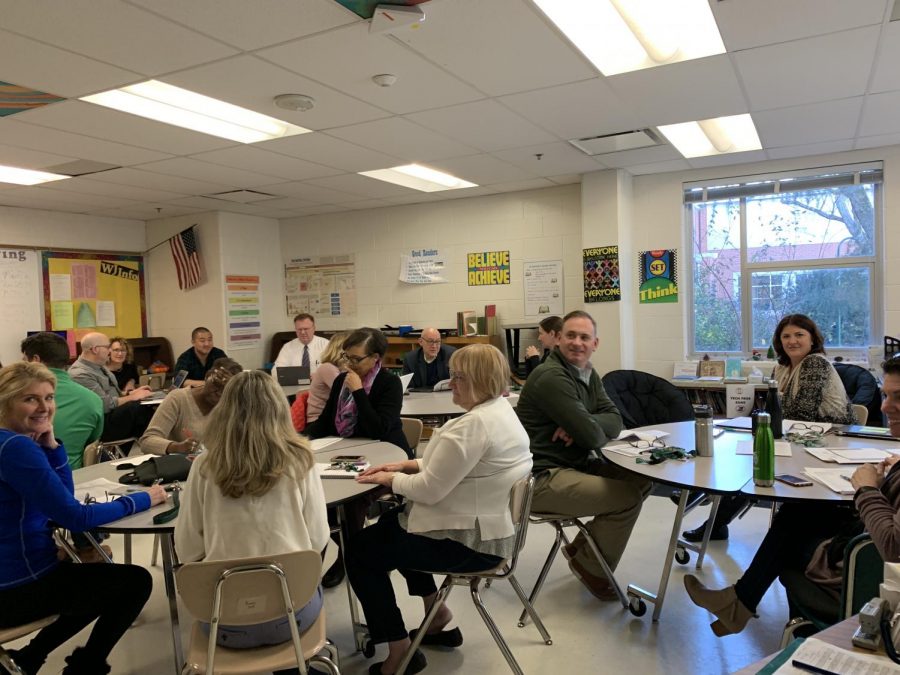 Principal Jennifer Baker leads a meeting with each of the department heads to discuss current school events and logistics in school. Baker shared the state report card with the community on Dec. 4.

The Maryland State Department of Education (MSDE) released a new school accountability model earlier this month, with WJ being one of four high schools in MCPS to receive a five-star rating. The MSDE unveiled a revamped state report card that measures each individual school’s success based on factors such as chronic absenteeism, graduation rates, access to a well-rounded education and academic achievement on standardized tests.

Walter Johnson, Poolesville, Winston Churchill and Thomas S. Wootton were the four high schools to receive the top ranking in the county. To achieve a five-star rating, a school must receive more than 74 percent of available points, based on five categories: school quality and student success, academic achievement, graduation rate, English language and proficiency and readiness for postsecondary success.

“Our goal is to improve every school throughout our state, and prepare every student for a bright future,” Karen Salmon, state superintendent of schools said in a written statement. “The new Maryland Report Card will help parents, educators, policymakers and the general public gain a better understanding about how each school is doing based on our accountability measures. Together we are working toward making sure our schools are the best they can be.”

After the federal government passed the Every Student Succeeds Acts (ESSA), education advocates and lawmakers pushed for a state-accountability system that moved away from grades of A through F for schools, arguing that it painted too simplistic a picture of the complicated factors that go into school scores.

“They are trying to be broad with the different factors that they use to create the rating,” Principal Jennifer Baker said. “I am very proud that WJ has a five-star rating…but I always caution people about ratings. Schools are very dynamic places, and there is a lot more to schools than the statistics.”

Schools in the D.C. suburbs fared well under the new system. More than three-quarters of schools in Montgomery County, the state’s largest system, scored a 4 or a 5. Montgomery County was closely followed Howard County, Harford County and Frederick County in high School rankings, but in elementary schools, MCPS led all other counties.

Walt Whitman High School, after years as a top ranking high school, did not receive five stars, as they were one percent behind due to a bad rating in the “chronic absenteeism” category. Relatively few schools received one star in Maryland, although there is a heavy imbalance of underachieving schools in struggling regions of the Baltimore area.

“I think the areas in and surrounding Baltimore are much less competitive and unfortunately, have lower standards for their students,” senior Julia Baumel said.

State officials intend for the system to be easy to access so the public can see how a school in one community compares to a school elsewhere. They said that the system would identify areas for improvement and that struggling schools with high poverty rates would get more state assistance.
“This issue needs to be addressed, because if given the same playing field, everyone can strive for success in the same aspect,” Baumel said.

In addition, the report released each county’s specific statistics of student proficiency for different racial demographics, income level and gender. The demographics of Walter Johnson do not proportionally represent those of Montgomery County as a whole.