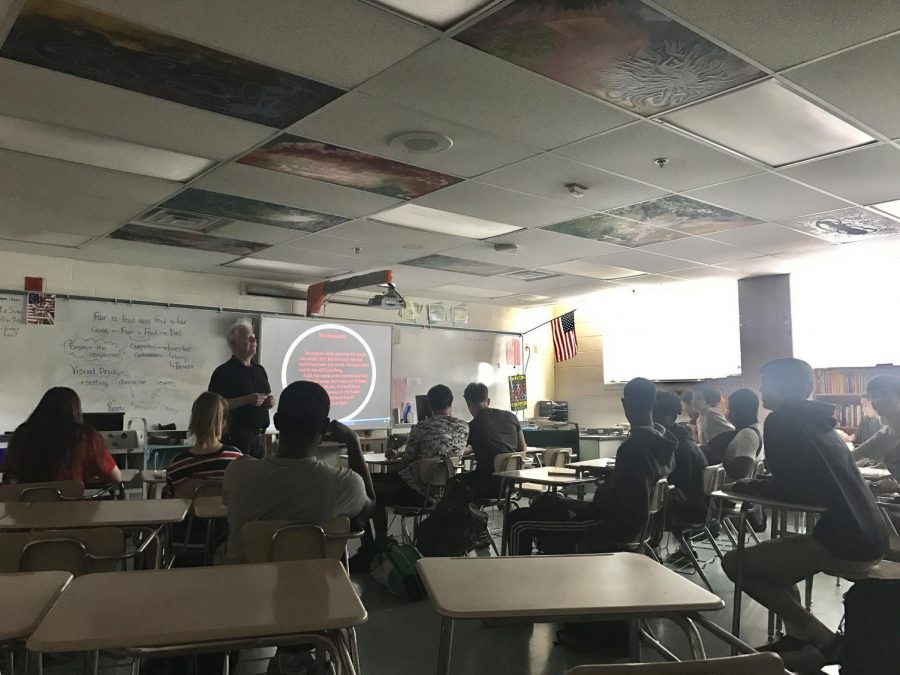 English teacher William Griffiths discusses the movie 'Schindler's List' with his tenth grade students. Sophomores' inappropriate actions at the showing of the movie have prompted discussions about ignorance and disrespect.

On March 29, a majority of the sophomore class took an in-school field trip to the auditorium to watch ‘Schindler’s List.’ The movie is shown to further students’ knowledge of the Holocaust and substantiate the information they read in English classes from Elie Wiesel’s novel, ‘Night.’ However, the film’s graphic depictions of the Nazis’ violence and both male and female nudity prompted inappropriate jeering from a few members of the sophomore class.

“I just heard a lot of people clapping and cheering whenever somebody was naked or when there was a sexual assault scene,” sophomore Imaan Saadat’Zia said. “I heard it for guys, but it was a lot louder for the girls.”

The shouting came from a large group of sophomore boys seated in the back of the auditorium. It was first heard during a short sex scene, but as the movie proceeded to show concentration camp prisoners nude as they were undressing for execution, the yelling and whistling continued. The boys also called out as a Nazi sexually assaulted a Jewish woman.

“I probably should have stopped the movie and started a discussion but I don’t know if that would have been effective or not. [The movie] is not something I’m inclined to show again.” English teacher Susan Hartung said. “I think the school’s response was appropriate but it could have been stronger.”

This is not the first time that such behavior has happened during the showing of ‘Schindler’s List.’ A debate is ensuing over whether or not the movie should continue to be shown, taking into account both the immaturity of 10th graders as well as the ignorance and disrespect that was displayed. Some suggest canceling ‘Schindler’s List’ for following years, while others believe that the film’s important messages take precedence over the attendees’ inappropriate behavior, and that the English department should better prepare students for the adult images featured in the film.

One of the ideas for next year’s sophomore class is to show the movie in small groups of people. Another is to preview several of the scenes, such as when the women are undressing for the showers, and explain why they’re doing what they’re doing, so that when the moment comes in the film it won’t be a shock.

“I’ve had some outreach from people that work at the Holocaust Museum and another person that does outreach for the Jewish Community Center, and people that are really well connected with powerful speakers,” Principal Jennifer Baker said. “We have some opportunities to seize this moment and help further the education of our students, so that’s on the brighter side of the impact of this, and kind-of the fallout.”