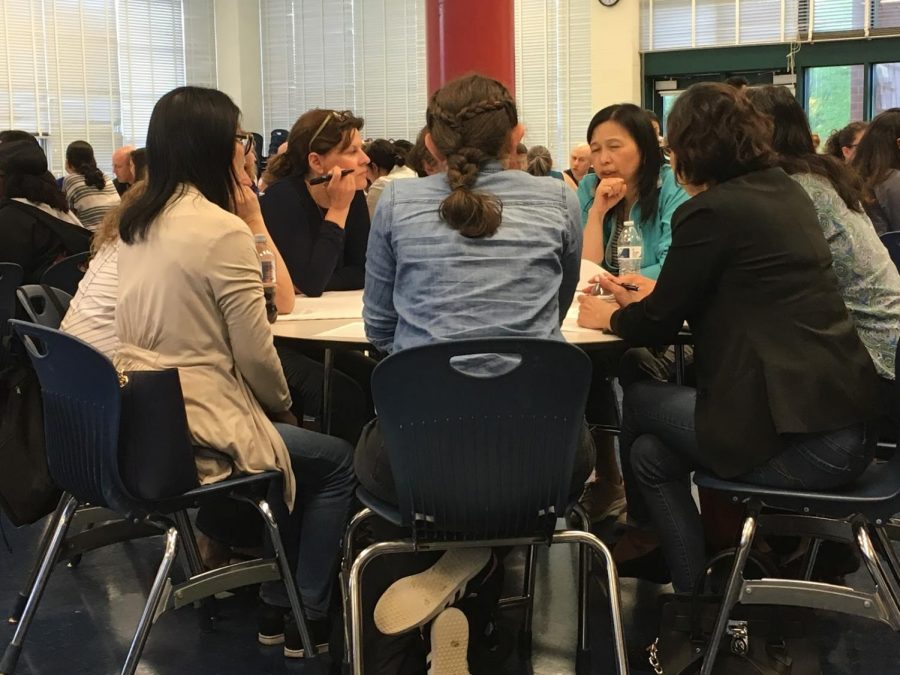 Parents discuss the county’s recent efforts to redraw school boundaries in hopes that they better reflect the changing demographics between white and minority students. There was a large turnout at the discussion and there were many parents on each side of the issue.

This issue played out when parents and students on both sides discussed their concerns at a public forum hosted by WJ on April 23. For the first time in 20 years, the Board of Education is looking into how school boundaries contribute to segregation by race and wealth. This decision has generated heated debate over what the county should do.

Several parents at the WJ meeting said they supported the effort.

“My kids had the benefit of going to a school with lots of diversity and got a better education because of it,” one parent said.

Some parents and students say that Montgomery County doesn’t provide equal opportunity to all students because schools in wealthier neighborhoods get more resources, and these schools tend to have majority-white students. Parents who oppose redistricting are worried about their kids being sent to a lower performing school.

Another public forum for this issue was held recently at Quince Orchard HS. According to the Bethesda Beat, one parent said that redrawing school boundaries would punish white families for “working hard and doing well and choosing to live in a certain community.”

The Board of Education announced in January that it would hire a consultant in May to conduct a boundary study, researching the way demographics and segregation affects students. The current Student Member of the Board, Ananya Tadikonda, proposed that the BOE hire a consultant. By spring 2020, the report will be complete, but the BOE isn’t required to take any action. For this reason, many parents said they were skeptical the initiative would bring about any change.

While many parents oppose the idea of new borders, those who attended the WJ meeting were vocal about their desire for more diversity in schools.

“Blair matches the demographics of the county pretty well, and white students at Blair aren’t worse off for that reason,” another parent said at the WJ meeting.

“Our demographics change every year. The 80’s was the last time we looked at the lines that make up our schools,” Skilton said.

“Redrawing the boundary lines may help to ease the disparities in resources seen throughout Montgomery County schools,” Carlisle said. “As the county diversifies, the allocation of resources will hopefully become more even so that there will be less of a disparity between schools in the county.”