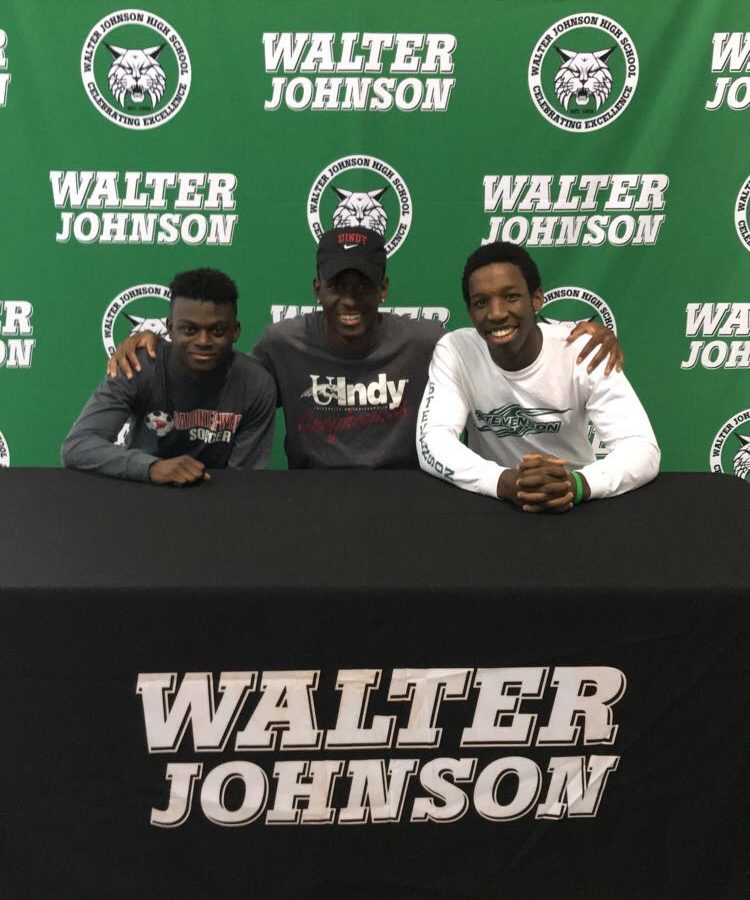 “Hey look ma, I made it. Everything’s comin’ up aces, aces.”

The words to Panic at the Disco’s recent smash hit can be found linked to hundreds of high school seniors’ graduation photos, as well as online videos paying respect to moms and dads that helped them nab that diploma. For two student-athletes from Walter Johnson, Mikael Rasheed and Chris Manguelle, a song simply doesn’t do justice for just how thankful they are to their parents for the sacrifices they made so that they could have the opportunity to play the sport they love. A sport which ultimately led to countless hours on the field and in the gym which led to a college scholarship. It’s every players dream….and a proud moment for the parents who have have been their most loyal fans.

The odds of a male US high school athlete earning a college scholarship to any Division (I, II, or III) school are just 12:1 for football and 13:1 for soccer. So what’s the secret?

According to Malcolm Gladwell, author of Outliers: The Story of Success, “…researchers have settled on what they believe is the magic number for true expertise: ten thousand hours.”

If you ask Makel Rasheed and Chris Manguelle, not only will they vouch for that magic ten thousand hours estimate, but they may even tack on a couple hundred more. Rasheed has been playing soccer since he was only four years old. After years of hard work he will be attending the University of Indianapolis, an NCAA Division II school, on a full scholarship. On the other hand, Manguelle’s first experience playing on an organized football team wasn’t until his junior year at WJ when his friend Brandon Barth convinced him to go out for the team; however, those two years were filled with 5:30 a.m. workouts, two-a-day practices, and hours in the weight room. Both student-athletes had a very different approach; however, one common theme rings true for both, they owe a debt of gratitude to their parents for helping to instill a strong work ethic, for providing rides to-and-from each workout, game, or tournament and encouraging them to believe in themselves when the task before them seemed insurmountable.

“I travel pretty much every weekend, and play four times a week as well as weekends which often times require traveling out of state. My mom postponed going back to college and getting her degree,” Rasheed said.

A sacrifice most would agree is the ultimate testament to a mother’s love. For Rasheed, sacrifices throughout his life have paid off ,but that isn’t always the case. Some would argue that many kids are conditioned to wake up, train, go to bed, repeat. It’s a job. And when you get to college on scholarship it truly is just that. But 10,000 hours leads to a scholarship, a scholarship leads to an education, and possibly the pursuit of going Pro which can lead to the ultimate double bonus, a degree as well as getting paid to play as a professional. Manguelle certainly recognizes the doors that football and hard work have opened up for him, but he has displayed a maturity that many athletes lack. Manguelle was offered multiple scholarships, but rather than choosing to sign with a powerhouse who competes in a higher division, he chose to pursue Stevenson which boasts a strong academic regimen, knowing that this path will lead to a more prestigious degree and a promising future.

“I chose Stevenson based on education. I recognize that I can get hurt at anytime. When comparing Stevenson to Bowie State, Stevenson stood out academically. It’s a much stronger institution academically. While Bowie State is better in terms of athletics, thought long term and knew sports can only get you so far, while a strong education is something that can’t be taken away; it’s forever,” Manguelle said.

Manguelle hasn’t entirely ruled out playing for a Division I program.

“If a DI school were to approach me while I’m at Stevenson and offer me a full ride to transfer and play for them, I would definitely take it. I don’t say this because it sounds cool but most DI schools offer the highest levels of education. I know that I’d be set after doing my 4 years, whether that is an NFL route or a successful job,” Manguelle said.

“No one who can rise before dawn three hundred sixty days a year fails to make his family rich.” ― Malcolm Gladwell said in Outliers: The Story of Success.

The work ethic that these two student-athletes have shown thus far proves that with a lot of hard work, determination, dedication, a sprinkling of love from their family as well as a whole lot of sacrifice on both parts, they are on the road to success. Good luck gentlemen. We’ll be watching for your name in lights: whether that’s on the field, or as the founder of the next Microsoft!