Is the history we fought for fading? 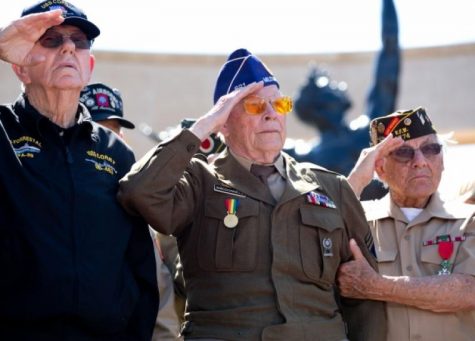 The second world war defined a generation. A whole new group of horrors were exposed to the world, but as freedom triumphed in 1945, American troops returned home to their families, friends, and society. Some faced challenges they never could’ve imagined, with many suffering from PTSD and other residual challenges left behind from combat. But now, almost 75 years after the Japanese surrender, the so-called “Greatest Generation” is dwindling. The Department of Veterans Affairs concluded in 2017 that only 558,000 veterans were still alive, but the question of how to preserve their legacy remains. Some argue we have done enough, with over 40 official monuments throughout the country commemorating their acts of valor. And yet, some veterans fear the wars of the past century may be left to fade into history books. There is merit in these fears.

Two thousand nineteen is the 80th year since the beginning of the war. This June marks the 75th anniversary of D-Day. But with our President being the focal point of previous commemorations, amongst other distractions, some wonder if we are downplaying the importance of historical events. Coming from a family with a long history of military service, I reached out to my great-grandfather, Max Scheibel, to try and get his feelings on the topic.

He was a WWII veteran stationed in Australia during the war and West Germany afterward. He was skeptical of those who think the issue will remain so notable, saying, “I don’t know if it’ll be remembered … things just move so fast nowadays, I’m not sure there’ll be time to remember.” Perhaps this is true. In a world increasingly centered around technology and innovation, people are looking more and more towards the future, and less and less to the past.

This has even been shown in our education system. STEM classes have been pushed to accommodate the adaptations many jobs have made, which, although helpful, has caused interest in the humanities to decline. In fact, as of 2017, the Department of Education noted that college students were majoring in History nearly 45% less than they were in 2007. As such, it isn’t extreme to wonder if, as history becomes less and less popular, the number of people who know a significant amount about many historical events will also decrease.

Mark Twain once said,  “History doesn’t repeat itself but it often rhymes.” There really is some truth to this. The state of global politics is constantly shifting, with each nation trying to remain on top. No one thought there’d be a war after WWI, but they were wrong. After WWII, the world spent thirty years cowering below two superpowers threatening a nuclear apocalypse. Nothing came of it and it’s safe to say we’re all glad, but violence hasn’t faded from our world.

There is precedent for this notion, too. There’s civil wars in Syria and Somalia, ethnic cleansing in South Sudan and Myanmar.  But in America, we rarely hear of these things. We sit in our bubble and act as if conflicts are a thing of the past.

Yet, it’s not even just the current conflicts we don’t know about. Despite the millions of lives lost, the Korean War has been forgotten in America. We will mark the 70th anniversary of its beginning a year from now, and the entire conflict has almost completely faded from the American conscience. From personal experience, we never even learned about it in school. In our efforts to condense 243 years of American history into a year-long course, we skip right from WWII to Vietnam without a word. And yes, I know that for many reasons WWII is a much more notable war, but still. If we can forget the Korean War, the Trail of Tears, the Armenian Genocide and I’m sure thousands of other significant events, what prevents us from forgetting that one?

It’s in our hands now. As this generation grows into adults, we are charged with keeping history alive. Whether we will or not has yet to be determined. But the idea that we even have to ask if we will frightens many people. Author Michael Crichton once said, “If you don’t know history, then you don’t know anything.” These words will serve as our guide. Will we follow?