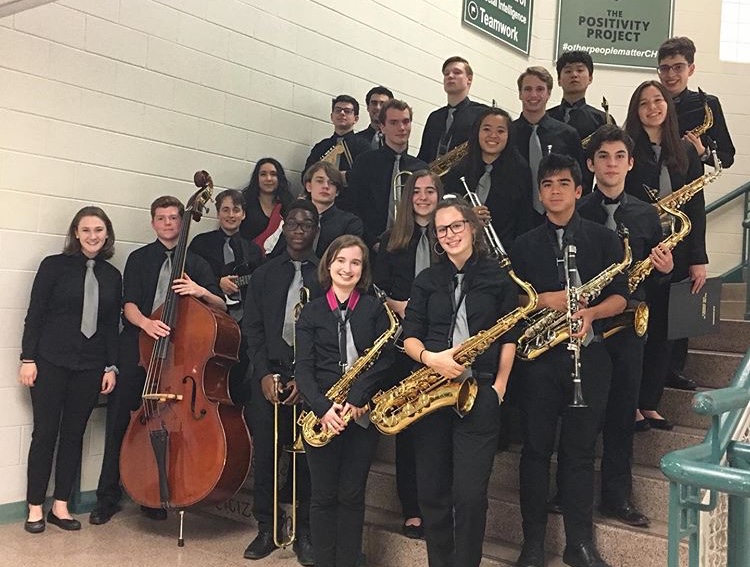 WJ Jazz Band put great performances together as they played at the Chantilly Jazz Invitational. The group finished third overall and is hoping to continue their success next school year.

The WJ Jazz Ensemble competed at the Chantilly Jazz Invitational at Chantilly High School in Chantilly, VA. At the annual regional competition, 18 jazz ensembles from the east coast competed for scholarships and prizes in both the combo and big band divisions. WJ put in impressive performances as they earned a 1 rating and placed 3rd overall, earning their place in the playoff rounds.

Junior Ben Kane thinks the band had great performances and is happy to see how well the group have progressed throughout the year.

“The band played really well at the festival. We were all engaged and excited to be there; everyone wanted to play their best for the band, Mr K, the audience and most importantly themselves. It’s really satisfying that the group has improved the way it has and started to click more and more with each other. We’re able to bring much more out of the music than we could at the beginning of the year and we have a lot of fun,” Kane said.

Junior Aidyn Connor was really pleased with his groups performance and acknowledges the time and effort they have put in to get to this point.

“The process involved a lot of hard work not only as individuals, but as a group because of the balance we had to achieve between sections,” Connor said. “We also had other opportunities to perform leading up to Chantilly which allowed us to listen to ourselves and really tailor our overall sound and articulation.”

Connor was honored for being one of the best rhythm section players at the competition and received a full summer camp scholarship at the National Jazz Workshop.

“It felt great especially after spending so much time practicing. It also was even more surprising after hearing the other high schools and how good their rhythm sections sounded,” Connor said.

Being in a band that relies on teamwork and chemistry; sophomore Timmy Heim noted how important being able to play as a group has been.

“We work really well together, especially in the rhythm section. We can all communicate throughout the songs with just looks and movements. It’s really important that we stay together because the rest of the band relies on us to set a steady pace,” Heim said.

The band, which performed in Chantilly on May 18, is now hoping to grow from these experiences and reach even greater heights at the competition next year as they perfect their craft.