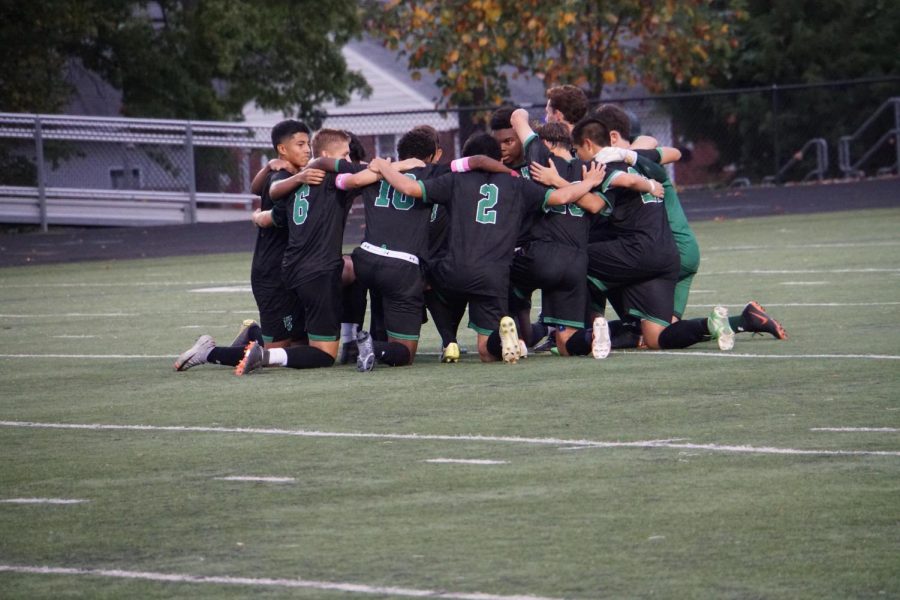 Boys varsity soccer huddles up pregame. They look to get to the old heights set by the 2016 state championship team.

With the start of school comes the start of fall sports. With the influx of new students and so many teams requiring the field, most squads only get to use the turf two or three times a week.
Some teams have been forced to play on the auxiliary field and softball field. Practices have begun to be pushed back to around 5:30 p.m., leading to complications for athletes who are forced to make the decision of whether to go home or wait until practice starts. If they go home, they have little time to do anything before having to go back to the school for practice. Staying at school leaves them with few options. They can’t go anywhere and all they have to do is homework.

Boys’ soccer has had to split the baseball field between varsity and JV, and they already don’t have the turf occasionally. Boys JV soccer frequently doesn’t start practice until 5:00 p.m. Some members of the team are ok just doing homework before practice.

“When we practice at 5:00, I’ll get something to eat [at G-Square] and then I come back to school and do homework,” sophomore Jack Weiss said.

This bodes well for G-Square, but student athletes who practice a couple hours after school don’t see their own soil until late at night. The time commitment is a big one for those who play fall sports. A sport like golf, where practice is off campus, is even more of a burden for the student athletes.

“As a team we practice together a few days a week and then we also practice on our own,” junior captain Jake Griffin said. “It’s a lot of time after school where we are at the course practicing.”

The practices are also a long way away from the school, sometimes in excess of forty minutes, making the time commitment even greater. Athletes are sacrificing a lot to play their respective sports, with practices and games occurring up to five to six times a week.

“Usually I’ll drive home after school and do some homework and then when it is time for practice I will drive back to school,” varsity soccer player, junior Zach Wheeden said.

Although some upperclassmen are able to drive home and back to school in time for practice, the issue remains for most underclassmen. Driving back and forth is a luxury that underclassmen don’t have.
Indoor sports are also crunched for space. Unlike the outdoor sports, where multiple teams are hoping to practice on the same surface, volleyball has to compete with itself for gym time.

“We have to practice in the small gym because there isn’t enough room to fit varsity and JV in the big gym,” sophomore JV volleyball player Ella Barrett said.

Just as with the overcrowding in the school, the playing surfaces in the fall are overcrowded for practice as well. This is very frustrating for students and many would like to see the issue resolved in a timely manner.