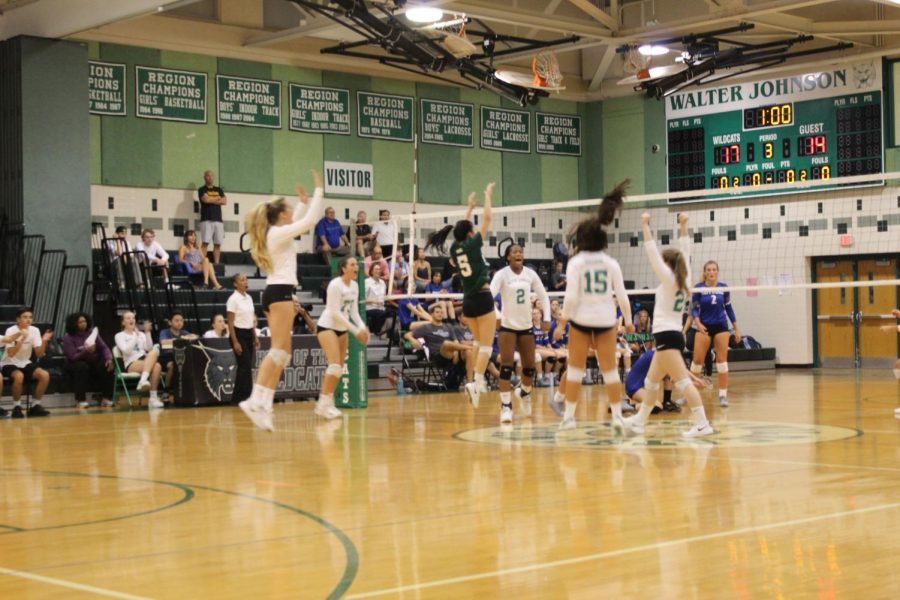 A few weeks have gone by, and the girls varsity volleyball team have begun their journey to states. With the same coach they’ve had for two years, they believe they can win.

“I was expecting us to be pretty good because we have a lot of returning seniors who we knew were going to start and we knew that we could play well together,” senior Kate Burk said.

So far there have been six games with the girls coming out on top in all but two. Their first two games of the season were against Blake and Poolesville; they won the first three sets, concluding the games early.

“We started off slow at the beginning of the game, but we came back and won three sets to zero. Because Poolesville isn’t the best team, we were able to pick up their tips and hits. We were strong and consistent at hitting, but serving could have been more consistent. Overall we came together and won,” senior Ella Tartt said.

They started their season off strong, but fell to Magruder after an extended game taking four sets until conclusion.

“After losing to Magruder we definitely improved in all areas. We passed, covered and made better plays. The loss made us work harder and smarter and know what to expect when playing harder teams like them,” senior defensive specialist Donya Hosseini said.

Their loss to Magruder was followed up by a win against Quince Orchard going up to five sets and Einstein ending in three sets. From here the girls were sent to the “Battle of Bethesda” tournament where they played and conquered BCC, Richard Montgomery, Whitman, Wootton, but lost to Holy Cross. Due to their performance, the girls placed first out of the five teams, the first time WJ girls volleyball has won the tournament.

“We won Battle of Bethesda for the first time this past weekend through hard work and determination,” Hosseini said.

Three days after the tournament the girls faced Sherwood High School. They were up 14-4 until they lost their number one setter Malina Grande to a sprained ankle. After her injury WJ continued the game and lost in the first three sets. Unfortunately she will be out for several weeks forcing the girls to play without a key player.

“Malina is a great setter. We don’t have many players who can move around the court and perform like she did,” Tartt said.

There are seven games left in the regular season and the girls are determined to make it to states with the players they currently have.

“So far we’ve done well on getting to know each other and to work as a team, but we need to improve in communication. If we do that the rest of the season will go well as long as we can beat Wootton again,” freshman Hadley Milkovich said.