Getting to know a pro: Quincy Amarikwa 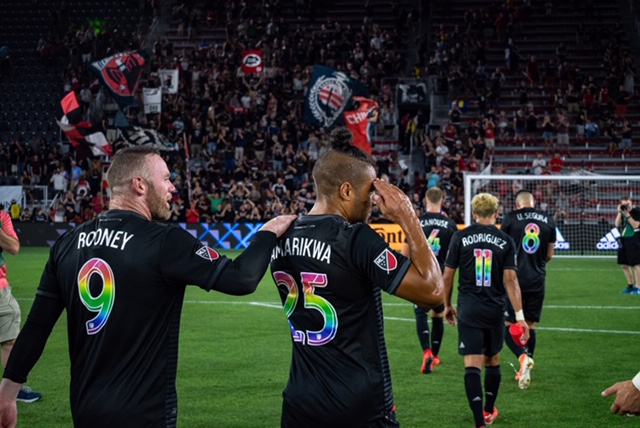 From getting in heated face-to-face battles with soccer icon Zlatan Ibrahimovic, scoring against teams from the top divisions in the world, such as Olympique de Marseille and Real Betis and lining up alongside England’s top goal scorer in history, Wayne Rooney, D.C. United forward Quincy Amarikwa has has seen it all. The 31 year-old MLS veteran is currently playing his eleventh season, one of his most eventful to date, as much off the field as on it.

The 31 year-old is somewhat of a cult hero in the MLS. Of course, he is recognizable due to his lengthy stints in MLS, but he’s also known for his informative Instagram live streams, his brand “Perfect Soccer” and the “Mental Strength League” (MSL), an acronym he created to help him stay focused in matches. Thanks to the perks of social media, Amarikwa has been able and willing to share his soccer knowledge with thousands of young athletes around the world. He uses his brand Perfect Soccer, whose Instagram page has over 20,000 followers, to help young players on their route to going pro, giving tips and sharing stories about his own personal experiences. He measures his success not just by his own achievements, but also by how he inspires others to excel. He strives to be the soccer mentor he wishes he had when he was younger.

Being someone who has years of experience in the top tier of US Soccer, Amarikwa has learned a lot about what it takes to stay on top of one’s game. Although physical conditioning is key, he claims that the most important part of soccer is the mental aspect of the sport. He created his own “Mental Strength League” system to stay focused.

“[MSL] helps me stay in alignment with my bigger picture goals and what I want to accomplish and not allow my emotions and short term decisions to derail me from those goals,” Amarikwa said in an exclusive interview with The Pitch.

He explains further that this system has allowed him, a self-described “non-highly-touted player,” to play in MLS for 11 years while most lack the mental strength to withstand the immense pressure that comes along with being a long term professional athlete.

Senior Cam Lukash is a massive D.C. United fan and appreciates Amarikwa’s efforts to give back to the soccer community.

“I think that Amarikwa’s actions shouldn’t go unnoticed. A lot of kids don’t know what to do or expect when they’re thinking about playing on a college or professional level, and Amarikwa’s advice can certainly benefit a player who has to make a decision that important. I also love how he is an advocate for mental health, especially since he promotes MSL on such a personal level–it basically feels as if he’s talking to you individually,” Lukash said.

Amarikwa’s mental strength was tested early, when he sustained a career-threatening injury at age 12. Amarikwa broke his femur and was in a wheelchair and full leg cast for over six months, being forced to wait another year before playing again. Although he had to “accept the idea that maybe soccer is over forever,” Amarikwa’s stubbornness and unwillingness to go down without a fight led him to come back even stronger than before. It gave him a self-proclaimed “chip on [his] shoulder” and he now plays without caring what others think of him and goes into games with the mindset of “I’ll figure it out and it will work,” no matter what obstacles might stand in his way.

The road to success may look like a straight path on the outside, but in reality it takes determined effort as well as a little luck. In high school, Amarikwa first played on his school’s junior varsity soccer team, something one might not expect from a future professional athlete. But this ultimately helped him stay grounded and gave him the opportunity to fight for his place on the varsity team. By the time Amarikwa had gotten to his senior year, he hadn’t received a single college soccer offer and had planned on attending UC Berkeley. It wasn’t until his final club game that he was spotted by scouts who offered him a chance to go on a college recruiting trip and eventually a scholarship to UC Davis.

From there, he enjoyed his spell in D1 soccer and was drafted into the MLS by the San Jose Earthquakes. What stands out about Amarikwa’s journey is during his high school career, he wasn’t contacting colleges or doing very much at all to get his name out, unlike most other college soccer hopefuls. Fortunately for him, this is where the luck pitched in and he ended up not needing to, but for others, taking measures to help ensure colleges have you on their radar is a great step in preparing for a future in athletics.

Lukash has followed Amarikwa during his tenure in D.C. and admires his generosity toward the club and fans.

“I think Amarikwa’s a nice, down-to-earth guy. I remember one day he did a takeover of the club’s Instagram, and he really gave the fans an insider view on what it’s like on game day (which I absolutely enjoyed). As many of his fans back in Toronto and in DC will say, Amarikwa is ‘goated.’ I admire how he takes time to look at dms and like/reply to comments,” Lukash said.

Much like on the field, Amarikwa doesn’t always feel the need to score the goal. If he can make an impact on young players, he’s happy to make the assist so they can reach their goals. Learn how to unlock the MSL by joining him every Thursday at 9 p.m. on the #AskASoccerPro Show: www.PerfectSoccerSkills.com/AASP