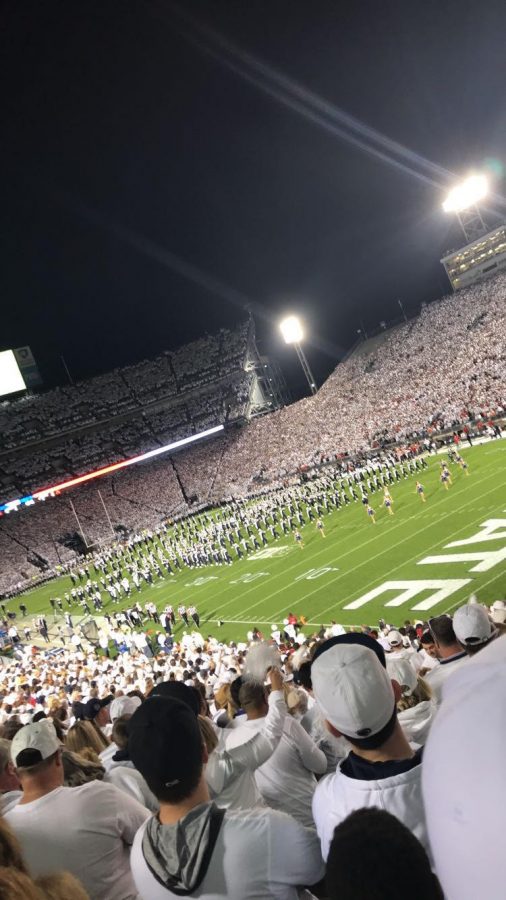 A rowdy Penn State football crowd anxiously waits for the match up against Ohio State in 2018. Electric crowds in college and professional sporting events make up for special experiences.

The thrill, the rage and the tears. The journey of a spectator at a live sports game can be one of the most draining tasks to accomplish. The endless screams, chants and sighs of relief make up for an experience that could break hearts or boost egos. Let’s take a look at some of the most intriguing games WJ students have seen over the years.

Penn State vs. Ohio State whiteout: When junior Zach Miller walked into Beaver Stadium on Sept. 29, 2018, there was not a doubt in his mind that he would walk out a different person. Attending four Penn State football games prior to the whiteout game, nothing would compare to what he was about to participate in. The once in a lifetime experience didn’t start at kickoff, but in the streets outside of the stadium, with food, games and a sense of unity.

“The smell of grilled burgers and dogs, smoked ribs and sweaty, anxious college students took over the atmosphere during the tailgate,” Miller said.

As the start of the game neared, people made their way into the stadium. Waves of white dominated the sparse red, as Ohio State fans found themselves in a Nittany Lion habitat.

Coming into the game, the Buckeyes were ranked third in the country. Although Penn State was the distinct underdog, Miller felt that the whiteout assisted in motivating and hyping up the team.

“The team looked like they were feeding off of the energy from the crowd. Both the players and fans treated every play like it was the last play of the game,” Miller said.

As the game was coming to an end, Penn State had a 12-point lead in the fourth quarter. Star quarterback Dwayne Haskins led his Buckeyes to a comeback that left Nittany Lion fans in shock and dismay. A 27-26 loss was the result, but the experience for Miller was worthwhile.

“Although we blew the lead, tailgating and seeing all of the fans come together wearing white was one of the greatest experiences I’ve been apart of,” Miller added.

2017 NLDS Game 2: Nationals vs. Cubs: The Washington Nationals had dropped game one of the National League Division Series to the Chicago Cubs the night before sophomore Jory Schofer walked into Nationals Park. It was a must-win game for the home team, and the Nationals treated it like that from the get-go.

The game started off with something for Nationals fans to cheer for, as star third baseman Anthony Rendon hit a home run with two outs in the first inning.

“Right away the ballpark was roaring when Rendon hit the home run. It was a great way to start off an important playoff game,” Schofer said.

Fast forward to the eighth inning. The Cubs lead the Nationals 3-1, two outs away from a potential 2-0 series stranglehold. Now-former National outfielder Bryce Harper walks up to the plate with a runner on first and a chance to tie the game.

Cubs reliever Carl Edwards Jr. tosses up a hanging breaking ball, a pitch that he would wish he had back. On the receiving side of the pitch, Harper sent a blast into the back of the second deck, sending the 40,000 fans at Nationals Park into a frenzy.

“The second he made contact, I knew that ball had a chance. It ended up in the second deck, and the fans were so loud that the whole sequence gave me goosebumps. It was a special moment,” Schofer said.

A couple batters later, with two runners on, first baseman Ryan Zimmerman hit a towering fly ball that barely found its way out of the ballpark, landing in the flower bed on the left field wall, right above Cubs left fielder Ben Zobrist’s glove.

The score was now 6-3 in favor of the Nationals. A game that meant so much for the players and for the fans, the Nationals found a way to pull off a win, and send the fans home happy.

“Every pitch during the game was something to look forward to. At times I lost hope, but at the end, the team I’ve believed in for my whole life managed to secure a win for D.C.,” Schofer said.

Ravens vs Browns 2014: Junior Ryan Hickey knew the Baltimore Ravens had a great chance of clinching a playoff berth on the brisk Sunday in December. It was the last game of the season and the Ravens needed a win along with some help from other teams.

“Walking into M&T Bank Stadium, I was excited for a fun day of football, but was also nervous because it could have been the last day of Ravens football for that 2014 season,” Hickey said.

The Ravens were sitting at a 9-6 record before their last game, needing a win against the Cleveland Browns and a San Diego Chargers loss against the Kansas City Chiefs to make the playoffs.

For the most part, the game was sloppy, as Ravens’ fans conveyed their disappointment with boos and vulgarity. The home crowd found quarterback Joe Flacco’s play unacceptable for the last game for the season.

Three quarters passed, and the Ravens found themselves in a deep hole. They were down 10-3 and on the brink of elimination.

“At this part of the game, I started to doubt our chances at coming back. Fans were giving up, and the way we were playing for the first three quarters was not our best football. I still had some hope that we could string together a comeback and keep our season alive, but it was minimal,” Hickey said.

The Ravens turned the game and their season around when the fourth quarter arrived. Flacco threw two touchdowns in less than a four minute span, rallying the Ravens for their biggest win of the season.The final score, 20-10.

There still was unfinished business, but in the hands of the Chiefs. As soon as the Ravens game finished, the jumbotron showed the ending to the Chargers-Chiefs game, and fans transitioned into watching.
Chargers quarterback Phillip Rivers threw an interception late in the fourth quarter to seal a Chiefs win and a Ravens trip to the Wild Card game.

“The crowd erupted when Rivers threw the late interception. We had been booing our team the whole game, but came together when watching the Chiefs pull out the victory. It was a great way to end a hard-fought season, and an even better way to celebrate with other Ravens fans,” Hickey said.