Flu season is in full swing 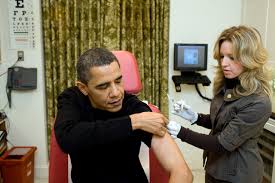 The flu shot is so important that even the former President of the United States gets one. The best way to prevent the flu is the shot.

During the beginning of October, people are urged to get their flu shot because the dreaded virus begins to infect people around that time of year. The flu is active year round but peaks in the fall and winter months.

The flu is a word most people dread hearing, mostly because of its severity and ability to make a person extremely ill. The flu virus is a viral infection that has been affecting people for an extensive amount of time, and it directly attacks your respiratory system, typically lasting from three to seven days.

Flu symptoms include fever, cough and headaches; if any of these symptoms are present,the flu is a possible culprit. Coming down with the flu of any type can put someone out of commission for an extended period of time.

“Getting the stomach flu was pretty painful and I kept vomiting. I was so weak I couldn’t even move and no sickness was as bad as that. So I will never pass up a vaccine,” junior James Byrd said.

The vaccine is offered at many places including, CVS, Walgreens, Costco, doctors offices.

The process of getting the flu vaccine is simply a shot injected into the arm. For most people the vaccine causes a minimal amount of pain.

“When I walked in, I sat down and the nurse came in with the needle. The shot did not hurt at all,” senior Rebeca Landeros said.

There are many different forms of the flu virus, including influenza C which is not extremely serious and influenza D which mainly affects animals.

“Influenza is widespread in two states already this season, according to the Centers for Disease Control, and those states are Maryland and Louisiana,” Executive producer in digital media Courtney Pomeroy said in an interview for WJLA.

Even though the state of Maryland is currently greatly impacted by this year’s flu season, that is luckily not the case for WJ students.

“Well it’s not the flu, we have some intestinal virus symptoms including nausea, stomach ache and vomiting,” WJ nurse KiNam Kim said.

There are many ways to avoid the flu, but washing your hands is the method that tops them all.

“Wash your hands whenever you can with soap and water. If that is not available, hand sanitizer works. If you are sick, stay at home,” Kim said.