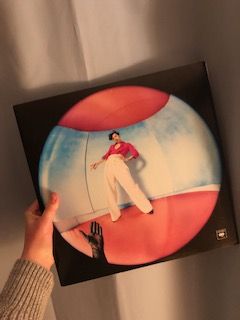 On December 13, 2019 Harry Styles released his sophomore album, Fine Line. The record features sad songs about an emotional breakup and upbeat tunes about love and rejoicing in kindness.

Following the split from British boyband One Direction in 2016, Harry Styles released his first solo album Harry Styles in 2017, which featured 10 songs over 40 minutes.

In October 2019, Styles released “Lights Up”, the first single for his sophomore album, Fine Line.

A clear theme can be found in this album: sadness and sex, as Styles said in a Rolling Stone interview. Song lengths range from snappy three minute tunes to six minute long guitar solos with occasional vocals.

Here are our picks of the best and worst songs on the album.

Elana’s Picks:
“Canyon Moon”: Styles’ vocals are very smooth in this song and are very Van Morrison-y to me. It has an island vibe to it, like a pina colada and clear blue skies when the whistling in the background begins. My favorite lyrics are, “she plays songs I’ve never heard/An old lover’s hippie music, pretends not to know the words.” As a lover of the Grateful Dead’s hippie music, this line really resonates with me. This song makes me want to sing and dance and be happy.

“Sunflower, Vol. 6”: Sunflower capitalizes on a fantastic bassline that grooves through the entire song and lays a great base for the melodies on top. The contrast of the bassline with the harmonies in the chorus match perfectly. The ad libs at the end of the song prove how much fun Styles had while creating this record. Another fun fact about the song is that if you play the first 10 seconds backwards, it says sunflower, which is another testament to how much fun Styles had while creating this album.

“Treat People With Kindness”: If the Rolling Stones and Queen had a child, it would be this song. The message is clear: to “treat people with kindness,” which has also been a part of Styles’ tour campaign since 2017. The choir-like intro sets the scene for this upbeat jam. The second verse really speaks to me, as Styles sings, “Giving second chances/I don’t need all the answers/Feeling good in my skin/I just keep on dancin.’” It’s all about positivity and being happy and it’s such an easy song to listen to.

Honorable mention: “Adore You”: The music video for Adore You took my breath away. Styles created a fictional island called Eroda (which is adore backwards) to set the music video in. Adore You is a sexy, groovy jam that is impossible NOT dance to.

Worst: “Cherry”: Cherry is a great song, don’t get me wrong. The only thing that puts me off about it is the voicemail of Styles’ ex- girlfriend Camille Rowe at the end of the tune.
She is cooing at him in French with an epic reverb on her words and it feels like I’m intruding on a private conversation between them.

Overall Rating: 8/10. The album doesn’t feel like anything revolutionary to me, like Styles’ first one did. It had some great pop songs mixed with a strong influence of rock and will please many ears. I am excited to see how Styles creates a live show around this album and some of his previous hits.

Chelsea’s Picks:
“Sunflower, Vol. 6”: This psychedelic, synth-saturated bop is a breath of fresh air, and I loved every second of it. The harmonies and the almost nursery rhyme-like melody of the pre-chorus were a pleasant surprise, and the random improvisational noises at the end really show how much fun Styles had making this track.

“Cherry”: This is a controversial choice, but I felt like Cherry was one of the most vulnerable and lyrically interesting tracks on the album. When writing about feelings of jealousy, one must toe the line to avoid coming across as vindictive or petty. Styles achieves this in Cherry, delicately and honestly conveying the pain of missing someone and seeing that they’re better off without you. Lines such as “there’s a piece of you in how I dress ” and “I just miss your accent and your friends/did you know I still talk to them?” are far more raw and honest than anything Styles has released in the past. A lot of people hate the voicemail from Styles’s ex at the end of the song, but I think it adds to the personal and genuine feeling of the track.

“She”: The verses of this song bring to mind a number of Beatles songs, such as She’s Leaving Home and Lucy in the Sky with Diamonds, both in their lyrical specificity and similar melodies. Despite obvious inspiration, this song is entirely Styles’s own. This slow jam, glam rock arrangement paired with Styles’s raspy vocals is delightful.

Honorable mention: “To Be So Lonely”: I consider this song to be one of the most instrumentally unique tracks on the album. I enjoyed the fingerpicking guitar style, and I think this mellow but driven song is the perfect transition between Falling and She.

Worst: “Canyon Moon”: To me, this song just feels like a KidzBop version of Big Yellow Taxi by Joni Mitchell. If you want folk, then just listen to the original legends instead of this cheap rehashing.

Overall Rating: 7/10: A perfectly good pop album with a few standouts worth adding to your playlist. It didn’t feel as unique and fresh as Styles’s debut album, and it seems as though his style is being muddled by attempts to conform to pop. I really appreciated the effort of creating an entire fake island, though!

Cyiza’s Picks:
“Falling”: Absolutely my favorite song off of the album. “I get the feeling you’ll never need me again,” like come on, I’m in tears just thinking about it. Styles belts out his feelings in the emotional song, the raspiness of his voice over the piano adds to the overall vulnerability of the song that I love so much about it.

“Fine Line”: Reminds me of HS1 the most in the beginning, it’s chill and harmonious. I could listen to the entirety of the song (all six minutes of it) over and over again. The accompaniment of all the different instruments as the song progresses just adds to the almost euphoric feel of the song and makes for an amazing outro to the album.

“Sunflower, Vol. 6”: Different from a lot of the pop songs off of the record, but it didn’t disappoint. You could tell that Styles had fun making this track that kind of strays away from the sound of the other tracks and anything else Styles has put out.
Honorable Mention: “Golden”: Golden is a nice change of pace from the somber feel of Falling or Fine line. It’s one of the only pop-centric songs that I enjoyed off of the album.

Worst: “Cherry”: It wasn’t that I hated the song, it reminds me a lot of Sweet Creature from HS1, which I loved. I think I was just expecting more, especially with the voicemail at the end. I also didn’t really like the voicemail, it didn’t seem necessary\; it was literally just a normal conversation.

Overall rating: 8.5/10: While the album had a couple of my favorite Harry songs, the overall album didn’t reach my expectations. I was hoping that it would encompass all of the uniqueness, and the folk rock sound that HS1 had. Fine Line was more pop, which isn’t necessarily bad, but it didn’t have the same effect that HS1 had for me.

For fans looking to hear this album live, Styles will be touring North American starting in late June on the 2020 Love on Tour.