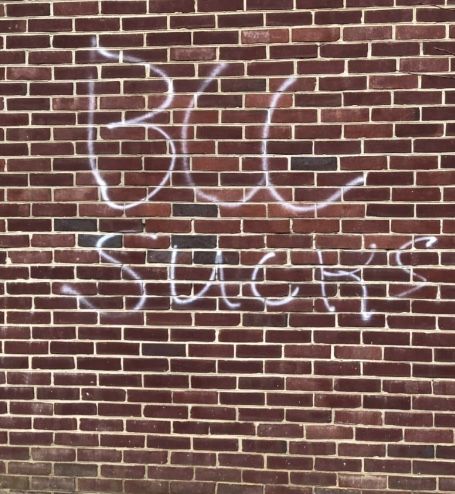 Vandalism found on the wall by the entrance to BCC. This message was spray painted on the wall along with other profane messages. It is unknown who left these messages.

The WJ shed where seniors paint their names was vandalized this week, presumably by BCC students. Many seniors’ names were covered in yellow paint reading “roll Barons” and “Sad Cows.”

Within the last few days, the wall by BCC’s entrance was vandalized with graffiti that said “BCC sucks” and other inappropriate messages.

“This is actually a whole new level of disrespectful,” junior Leo Dobosz said. “It’s the seniors’ last year and [BCC] just comes and writes all over their names.”

It’s a yearly tradition for seniors to paint their names on the shed at the senior picnic.

“I think we should fix this and then have a senior picnic part two,” senior Holly Darby said. “The most important thing is that we don’t retaliate because it’s stopping to their level.”

Security and administration said they are not convinced that it was BCC students that did the vandalism.

“I’m not sure it’s a BCC student. It could be one of our students flaming up that rivalry,” head of security Patrick Rooney said. “I’m not going to blame BCC unless I know for a fact that someone from that school did it.”

“We don’t know who did it. I’m not convinced it was BCC but we are very disappointed in anyone who could vandalize or damage property. If anyone has any information on who’s responsible please share with security or administration,” Heintze said.