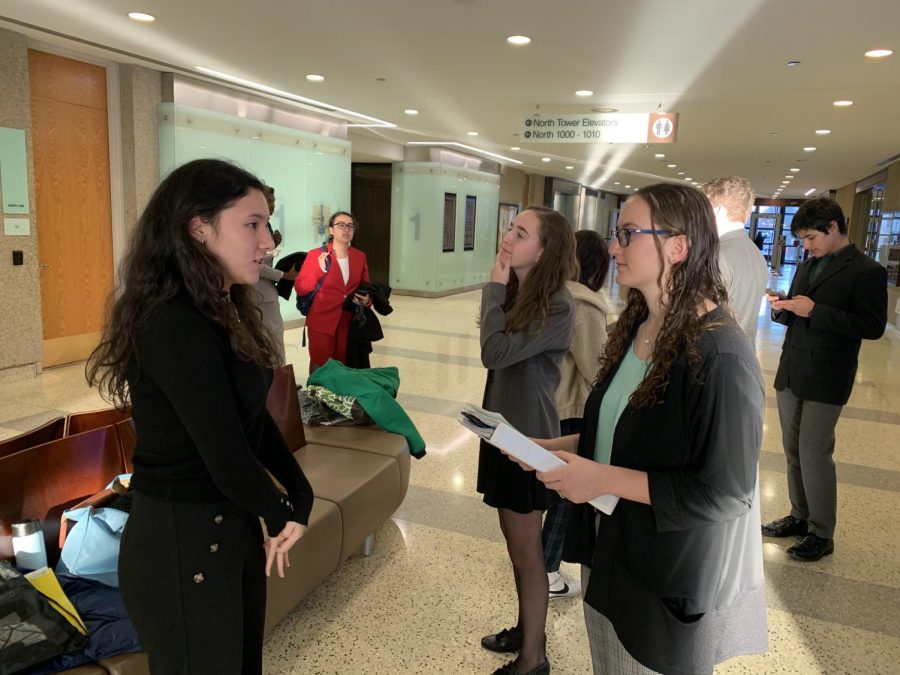 Junior Mia Chai is prepping with her lawyers, juniors Emmie Maisel and Danielle Nevett during a break in their trial. Simmon's team concluded their season by making it to the second round of the playoffs.

Science Olympiad
The Science Olympiad team won first place at Regionals for the first time in four years and qualified for States.
“It’s exciting, but I’m feeling a lot of pressure on us because this is one of the best years that we had in awhile and we know that there will be a lot of tough competition at States,” junior Lan On said.
Earlier in February, the team competed in a competitive invitational at Princeton University and came in 15th place. WJ competed against some of the top teams in the nation including schools in California. However, not every member of the Science Olympiad participates at States. Only the top seventeen students will compete at States. States will be in the beginning of April. If the team wins first place, they will go on to Nationals.

Spectator Magazine
The Columbia Scholastic Press Association awarded the Spectator Magazine four awards, including the Gold Medalist Certificate for their work last year. Class of 2019 seniors Olga Drozdovitch and Evelyn Hoon were recognized for their work and were awarded the Certificate of Merit for literary or literary/art magazine cover design for magazines. Senior Atticus Goodenow was presented third place for computer generated single illustration for magazines. The entire staff was presented third place for a non-fiction interview for magazines. Last year, the Spectator interviewed Greg Miller, a Pulitzer Prize winning author and reporter for the Washington Post.
“The Spectator is the artistic voice for WJ students…it’s usually one of the top ten literary arts magazines in the country. Our interviews are always probably the best in the country,” adviser William Griffiths said.

Debate Team
The Debate finals were on February 20-21 at Blair High School. There were four WJ teams of two who qualified for the Debate finals. Juniors Sammy Peterson and Leo Bourke were the only WJ team to qualify for the round of sixteen. The pair was the first WJ team to make it to the round of sixteen in three years.
“I’m definitely proud of it. It’s an accomplishment. The reason we were able to make it so far was because we had a great group of captains and [they were] a great support group for the team,” Bourke said.

Forensics
As part of WJ’s public speaking team, eight WJ students competed in the Forensic finals last month. WJ had the most students move on to the finals other than Sherwood High School. Senior Corrine Stuckey won first place in drama and junior Colin Browning won first place in humor. In addition, senior Alexa Goldstein, who wasn’t able to attend finals, won the Michael D’Anna Excellence Award for qualifying for finals in five categories.
“Everyone who went to finals at WJ did really well. The WJ team got second place in the team awards, so we had the second most points of any team and in most of the categories we had someone from WJ up there so that was really exciting,” senior and co-captain Isabelle Carlisle said.

Math Team
Math team wrapped up their season in February and improved a lot this season. They scored fourth place in a meet in January and they placed eighth in their last competition back in February.
“[At] the beginning of the year, we had more people than usual which was good. At every competition we did okay. There was a new county writer for the problems and they were much harder, but we did okay. Overall we weren’t last so that was good,” senior and vice president Jacob Coffey said.