Sports to re-watch during quarantine 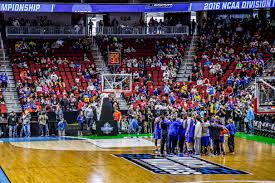 While fans across the country will miss out on watching their team compete for an NCAA tournament championship, it can be enjoyable to go back and watch some classic March Madness affairs.

The generational pandemic that the coronavirus ignited this past month, has brought drastic changes to all levels of sports across the globe. Just as many of the most watched leagues were getting to the climax of their seasons (NCAA basketball, NBA), or embarking on a new season (MLB), this unprecedented situation forced the world of sports to pause.

Until leagues resume play, sports channels are airing memorable games from the past, documentaries and continuing talk shows, in an attempt to provide the millions of fans across the nation with the sports entertainment that has been scarce during spring.

Although nothing can replace regular seasons, playoffs and the thrill of watching live sporting events, the throwback games and other sports content that are aired daily have been great alternatives.

Junior Zach Miller was looking forward to March Madness and witnessing his Penn State Nittany Lions in the tournament for the first time since 2011.

“2020 would have been the ideal year for a tournament run for Penn State. I invested so much time in this team, and watching the program grow and succeed like they did this year was something special,” Miller said.

The nine year tournament drought was most definitely going to end for Penn State, but as the pandemic worsened, Selection Sunday never happened.

“It was a hard pill to swallow. March Madness was just a couple weeks out of the calendar year that meant so much to me and millions of fans across the nation. It was hard to realize that the college basketball season had ended so abruptly,” Miller said.

CBS Sports Network aired classic tournament games from both the 21st and 20th centuries to fill in the hole in the sports calendar that was devoted to March Madness.

“Although it wasn’t nearly the same experience, I enjoyed watching some of the best tournament games in history, especially the ones before my time. Watching NBA stars in college was special, and I learned a lot about teams, programs and coaches from the 80’s and 90’s,” Miller said.

For junior Evan Calhoun, opening day for the MLB season was something he had been looking forward to ever since the Washington Nationals won the World Series in 2019.

Calhoun was able to watch a Nationals game following the delay of the start of the season. It was star pitcher Max Scherzer’s 20 strikeout game against his former team, the Detroit Tigers back in 2016. Even though Calhoun never envisioned himself re-watching Nationals games from four years ago during the 2020 regular season, he wasn’t complaining.

“I enjoyed watching for the second time a historic moment in the MLB. As a fan I thought it was cool to look back and remember some of the old players and coaches, and reminisce.

Sports fans will continue to be optimistic for leagues to finish and start their 2020 seasons. It may not feel the same watching these games from the past and knowing the end results, but entertainment comes in many forms, and during times like this sometimes all we can do is take what is offered.