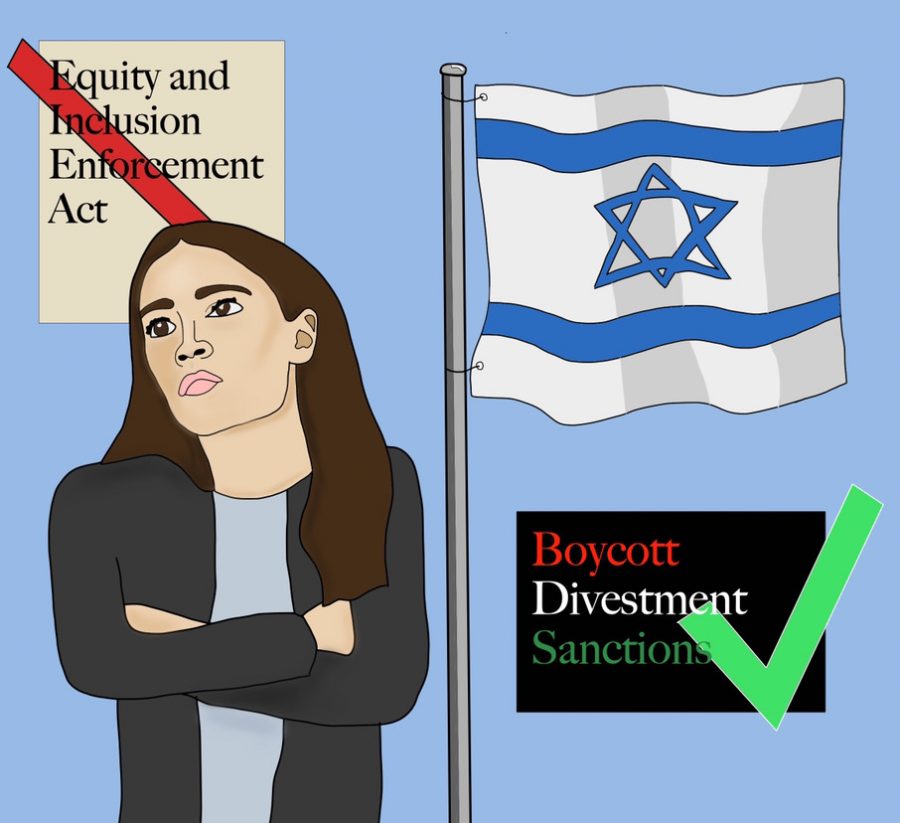 In 2018, Alexandra Ocasio-Cortez became the youngest woman ever elected to the United States Congress. Since taking office, she has become an idol and inspiration to millions of Americans due to her unapologetically progressive views and opinions. However, while Ocasio-Cortez has fought for many minorities, the one group that she has consistently left out are the Jewish people. In fact, “leaving out” is a bit of an understatement.
Unfortunately, due to her inclusivity and willingness to work with and defend other targeted communities, many people are completely unaware of how she treats Jews, and once they are informed, they find it hard to believe and try to deny her actions. So, to combat this ignorance, I have compiled a non-comprehensive list of moments when Representative Ocasio-Cortez has been anti-Semitic:

1. She opposed an amendment to the Equity and Inclusion Enforcement Act (EIEA) that aimed to include anti-semitism as a form of discrimination:
This is possibly the most important and pressing item on my list, given its recent and blatant nature. In late September, an amendment to the EIEA that sought to include discrimination against Jews was met with great opposition by 162 Democrats — Ocasio-Cortez included. Although it did end up passing in the end, how such obvious anti-Semitism on the part of Ocasio-Cortez and the other Democrats was overlooked by American progressives (as well as the mainstream press) is beyond me.

2. She refused to attend an event commemorating the life of Yizhak Rabin, who gave his life toward ending Israeli-Palestinian bloodshed:
Ocasio-Cortez initially accepted the invitation from Americans for Peace Now, a peace advocacy organization, to partake in the virtual Rabin memorial, which would honor the former Israeli Prime Minister and his fight to end the decades old Middle Eastern conflict. Soon after, however, her sentiment changed, and Ocasio-Cortez dropped out of the event. Why? Why not support the man who recognized the Palestinian Liberation Organization as the representative of the Palestinian people, and shook hands with Yasir Arafat as his partner in the fight for peace? Why not recognize the man who was literally assassinated for his belief in a territorial compromise with the Palestinian people? Some critics will argue that in Rabin’s early days he treated Palestinians disastrously, and these critics are absolutely right. But once Rabin educated himself on the history of the conflict and the Palestinian’s claim to the land, he admitted he was wrong, changed his course, and dedicated the rest of his life to making amends. How many modern day politicians do you know who would do that?

3. She continues to support BDS:
Now, this one is a bit harder to explain, especially considering Ocasio-Cortez’s varying comments on the subject. However, the best example is when she voted against condemning the movement in 2019. But, in order to understand why this action was wrong, one first needs to know why BDS is wrong.
BDS claims to be fighting against the Israeli government’s persecution of Palestinians. And while they are right in stating that Palestinians are mistreated by Prime Minister Netanyahu, pretty much everything else that BDS says is false. For starters, one of BDS’s stated goals is to end Jewish self-determination in the Middle East, claiming that the Jews “colonized” the land. This is inherently anti-Semitic, considering that “colonized” implies that Jews never had that land to begin with, when, in fact, Jews have maintained ties to Israel for thousands of years and are indigenous to the land.
The truth is that, at least for the majority of BDS supporters, their main reason for hating Israel is simply because its a Jewish state, which is indicated by co-founder Omar Barghouti’s 2014 statement that he opposes a Jewish state in any part of Palestine, and hopes for a one state solution that will result in a Jewish minority. He even said that any Palestinian who supports a Jewish state is a “sell out,” which is not only wrong, but very anti-Semitic, considering the tropes about Jewish people and money. BDS as a whole has also been greatly responsible for the rise of anti-Semitism and harassment of Jewish students on college campuses, wrongly conflating Jews with the actions of the Israeli government.
Additionally, BDS and its supporters have regularly published anti-Semitic cartoons reminiscent of those made by the Nazis, in which Jews are portrayed as greedy, power hungry and with giant noses. BDS members have also spouted medieval lies, such as ones blaming Jews for drinking the blood of children.
None of the aforementioned facts are hidden knowledge. They are as easily accessible to Ocasio-Cortez as they are to me. Having learned of all these ugly truths, what reason could the Congresswoman have for supporting BDS aside from being an anti-Semite herself?

Now, it should be noted that in early 2020, Ocasio-Cortez attended the New York Solidarity March Against Anti-Semitism. She has also continued to treat her Jewish coworkers in Congress with respect and collaborated with them on numerous bills and projects. However, these little actions cannot make up for the larger, more influential ones.
It also must be mentioned that the anti-Semitism from Ocasio-Cortez and other leftwing Americans doesn’t excuse right-wing anti-Semitism from groups like the KKK. Both Democrats and Republicans promote anti-Jewish views, and thus both sides need to be held accountable.
Ocasio-Cortez is not a villain or an evil person, and the work that she has done for other minorities has been great. I only wish that she would treat Jews with the same sentiment.