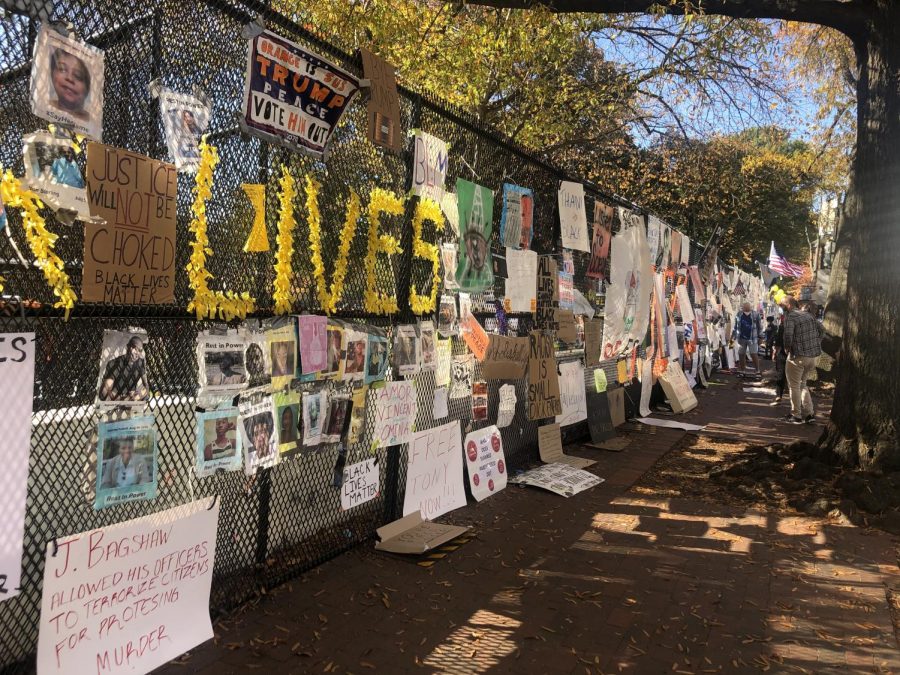 People across the country have protested in response to the death of George Floyd last spring, and WJ students are no exception. Many students have gotten involved with the Black Lives Matter movement and are making their voices heard.

Ila Gordon, Special to The Pitch

Beginning on May 26, and continuing through the summer, Americans, craving change, protested the murder of George Floyd and countless other innocent black men and women. Fifteen to 26 million people across the nation took action against systemic racism and police reform chanting “Black Lives Matter,” and “Defund the Police,” one of whom was sophomore Shiima Nantulya.

As Nantulya took the streets, hungry for change “It was just beautiful,” she described. “We had signs everywhere and it was such a beautiful moment and such a beautiful protest… It was a different feeling than I’ve never felt before.”

“[The movement] has definitely made me want to be more informed about the issues that my community faces… I definitely have tried to educate myself to learn about white privilege and why we have to defund the police,” Nantulya said.

Nantulya has thrust herself into an action-seeking community, full of young activists just like herself. Especially with issues and movements as widespread as Black Lives Matter, knowledge is power. Nantulya, along with many other students and young activists have found a feeling of empowerment and inspiration from all that they have learned throughout this life changing movement.

In addition to the education the Black Lives Matter Movement has promoted and provided through its worldwide recognition, the movement has enhanced the way that police reform and institutional racism are viewed by people who may already be aware or educated about these issues. While police reform and institutional racism are major issues that are pronounced daily, it’s important to note that these critical issues don’t affect everyone equally. Sophomore Alexander Lewin-Knauer describes how his experiences with these issues is different than a person of color.

“I’m not black. I obviously hear about [these issues] a lot, but they don’t directly affect me,” Lewin-Knauer said.
Issues such as systemic racism and police reform, that the Black Lives Matter movement has pushed for so passionately do not affect everyone equally because of their race. However, some believe that everyone has the basic obligation to stand up against racial injustices, even if they don’t affect everyone personally. This idea alone has sparked a surge in action from the younger generation especially.

“I think everyone has that responsibility to just try to be a caring person, and standing up for these causes is a way to be caring,” Lewin-Knauer said.

“I lost some of my friends because they did nothing. Sometimes only when it benefits them is when they care. Some of my white friends don’t care about these issues that affect the black community… I also think that people are just uneducated so there is room to grow but some people just don’t want to learn,” sophomore Zion Dapaa said.

Everyone has different goals and results that they hope will emerge from the Black Lives Matter movement. Many students wish for widespread awareness so that their peers can be properly educated. Others hope for systemic change through legislation. Many, however,want both of these changes to be represented and implemented.

“I mean you can only hope for big changes in the government and stuff like police reform… but maybe just maturity and education in my peers,” Dapaa said.