How a new roster and COVID-19 is impacting the Icecats 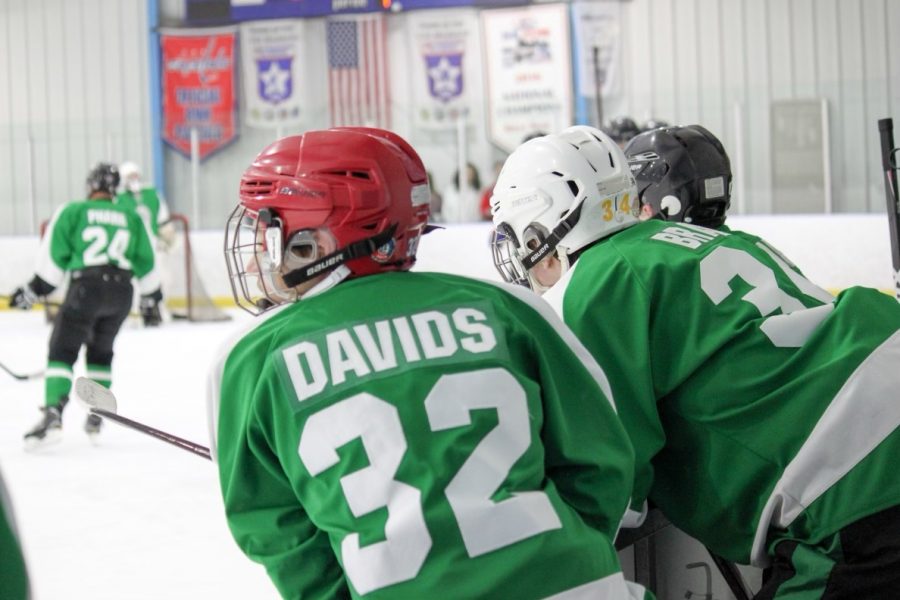 Captain Justin Davids looks onto the ice while his team is warming up. He gears up for another game with the Icecats while resting first on the bench.

The WJ Ice Hockey team has brought a great amount of fun to the Friday nights of the Madcow student section. This year, things are quite different. COVID-19 has shaken up much of the “normalities” for Wildcats. For the Ice Hockey team, this meant a season with little to no preparation, difficulty rebuilding and not a lot of time to adjust to a new coaching staff.

Veteran player and captain junior Justin Davids believes that the poor performance of the team thus far is a result of the adjustments made from COVID during this challenging season.

“With no fans watching you, you have a different atmosphere in the game itself, wearing masks on the ice makes you feel like you are terribly conditioned, and the new bench protocol just is not the same feel as it was last year. I think that’s affected me and some of the older players who are used to a different system,” Davids said.

With being awarded the “C” (standing for captain) on his jersey, Davids felt it necessary to try and not let COVID affect his mentality the way it has affected both veteran and new players on the team. But, this was difficult for him to do so as there was a newfound lack of motivation due to the impact of the virus on the season.

For sophomore returner Ethan Birndorf he had to adjust the way that he prepared for the season both by himself and with his team.

“Because of COVID, not many training centers are open, so I do most of my training at home. The team prepped for the season by having some off-ice workouts while social distancing and wearing masks,” Birndorf said.

Even with some form of preparation, the team was certainly not ready to compete. The devastating loss of 14 seniors and their previous head coach caused the need for a complete rebuild of the team. Birndorf acknowledges that there was a huge loss of skilled players, but is still optimistic about how the rest of the season could pan out.

“Last year’s team was more skilled than this year’s team but that won’t stop us from winning games,” Birndorf said

Freshman Jon Corwin came into the season with no experience of how varsity level hockey was played. He did his best to prepare for the season with his gym at home and practiced extra stick work aside from what they did in practice. His outlook on the season is similar to Birndorf’s.

“We will lose games like every great team does, but if we’re losing we won’t stop competing and trying to get back in the game. We have good, skilled players on the team and work best when we use each other, Corwin said.

The Icecats are 1-3 so far this season. For the foreseeable future, the latest executive order from the governor has suspended the rest of the season. Although this news disappointed senior Ari Menezes, he is sure this time can be used to help the team’s rebuilding process and give opportunity for players to do work on their own in order to help the team.

“I think we have a lot of work to do, since we lost so many players from last year. We need to work on cohesive play since a lot of our new players aren’t used to the speed of varsity games,” Menezes said.

It is uncertain if the Icecats will be able to resume their season this year. Players are hopeful that in January cases will go down and they will be able to get right back on the ice and pick up where they left off, but with players having improved their skills during their time away.