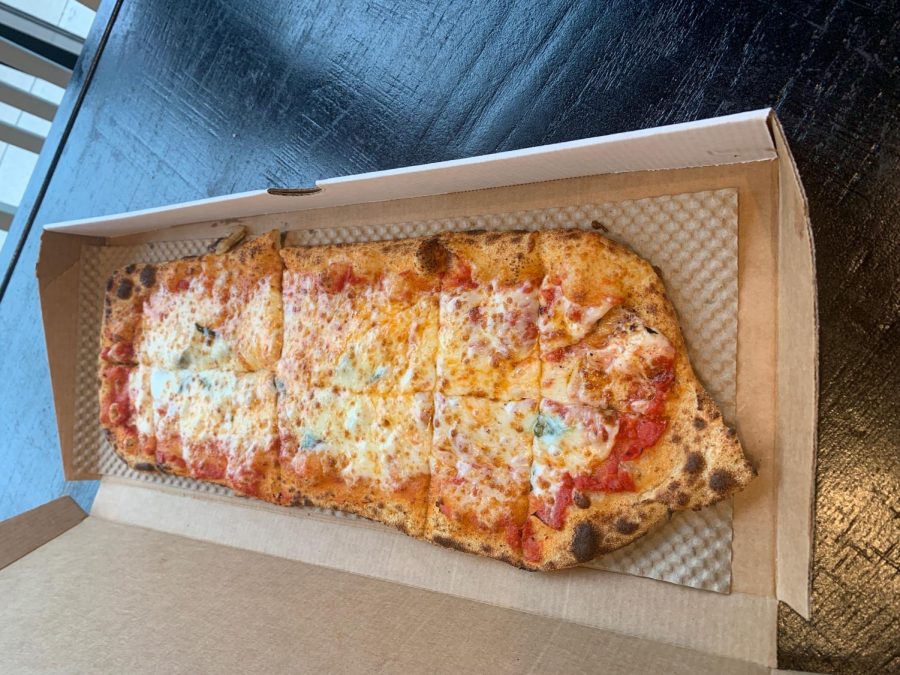 &Pizza, located in Pike and Rose, offers easily customizable and fresh slices - or squares - of pizza. One of it's most disguising factors was the stretch of its mozzarella cheese.

Pizza: a world renowned delicacy and a staple of the American diet. Among the WJ population, community-favored pizza parlor “Flippin’ Pizza” was once the go-to place for students craving the classic Italian dish, due to its affordable deals and close proximity to the school. In the wake of quarantine and online schooling, however, Flippin’ is no longer the only accessible pizza option for students. Students are now dispersed among Rockville, Bethesda, Kensington and Potomac.
To aid our readers on their quest to stretch their cheesy horizon, The Pitch’s Pallette Pioneers (Beni, Nyomi, Ben) sampled various pizza places throughout the local area.

*In order to standardize our reviews, we ordered plain cheese slices at each restaurant.

Flippin’ Pizza:
Out of the bunch, it is certainly the most basic. In this case, though, basic isn’t really a bad thing. Especially considering the benefits Flippin’ gives to students during the school year, it is a great place to rely on. If you can get past the grease and inconsistent slices, Flippin’ is the place to go when in a bind.

Cheese Quality: Decent, standard mozzarella for a NY style cheese slice.
Ratio: It can vary a lot, some days it will be more sauce than cheese, other days it is the opposite.
Crust: Like the ratio this can vary a lot, it is either so crisp it is almost burnt, but it can also be very doughy and undercooked.
Size: Looks very similar to the mama lucia slice, but a little bit smaller.
Service: Decent, mainly a place for students to get pizza and go during the school day. The only interaction you will have with an employee is likely during the transaction. Mostly made up of younger workers, often high schoolers.
Price: Fair, the $5 special for two slices and a drink during the school year is a popular deal among students.

Ledo’s Pizza: Don’t
Ledo’s pizza is a renowned name, but there seems to be little justification. Their pizza, both in taste and quality, resembles the bland cardboard cutouts we were fed in elementary school that were somehow allowed to be labeled “pizza.” Don’t be fooled by their geometric uniqueness—their flavor is anything but special.

Mama Lucia’s:
Ben: Despite the common downfalls of a New York style slice, such as the nasty orange grease that leaks out of the slice, it was the best of the day, in my opinion. It folded nicely, had a nice crunch to it when you bit in, and the cheese was nice and stretchy. A better crust and more flavorful sauce could do this slice a lot more justice, but still it has to be the best out of the 5.
Nyomi and Beni: The slice was sub-par. The crust was dry, reminiscent of a stale tortilla chip. The cheese vastly overwhelmed the taste of sauce, which is a pet peeve of Nyomi’s. It was typical reheated pizza, devoid of fresh taste but still undeniably greasy. However, I would not be honest if I ignored the appetizer bread we were given, which was sauteed with red peppers and served with a dipping sauce filled with parmesan.

Cheese Quality: Okay, looked somewhat similar to the Mexican blend from Giant. Orange speckles in addition to the mozzarella cheese.
Ratio: Much more cheese than sauce, but for a new york slice this is how it should be.
Crust: Very dry, tasted like sand in pizza form, if that makes any sense at all.
Size: It is a standard new york style slice, a little bit bigger than Filippin for comparison. The bread in the beginning was a nice touch too, even though I wasn’t its biggest fan.
Price: $3.45 for a slice of pizza is as Bethesda as it gets. I mean sure, it wasn’t bad, but this is something that would run you 99 cents in NYC. Maybe I’m thinking too hard about this, but $2.50 is the max for one slice of cheese in my eyes.

&Pizza:
What distinguishes this fast-casual eatery from the competing pizza establishments is its freshness. &Pizza is prepared as quickly as Flippin reheats their premade slices, but is eons ahead in quality. The bread is fresh out of the oven, risen and airy. If you can’t tell, we enjoyed this dish.

Cheese Quality: Sublime; great stretch, pairs nicely with the fresh ingredients and doesn’t overpower them.
Ratio: Much like other places, less sauce in comparison to cheese and crust. 2:2:1 ratio for cheese, crust and sauce respectively. The sauce and cheese will come on the lighter side for both (unless the customer were to request extra).
Crust: Very airy and fluffy, but with pockets of crispness where it is obviously charred.
Size: The pizza in whole is large, but each slice is fairly small and manageable.
Service: Although there were only 2 employees there, the Chipotle style set up to create the pizza does not require much labor. Because the employees jobs are to simply create the pizza and conduct the transaction, service can’t really be judged like a restaurant.
Price: $10.25 before tax. A bit pricey, but what can you expect from a create-your-own pizza in North Bethesda?

Potomac Pizza:
Unfortunately, it seems that our slices sat in the oven a little too long. Shades of dark brown scattered the top layer of cheese and the crust was thin and crunchy. That, in addition to Beni getting lost on his way to pick up the order, detracted from the potential of Potomac’s slices, which are generally well regarded in Nyomi’s eyes.

Asian’s note: Compared to its contemporaries, Potomac’s pizzas are far more saucy, which means for those who enjoy their ratio with a little more cheese, Potomac may not be the choice for you.

Cheese Quality: A little overcooked, separated into chunks upon testing for elasticity and drip.
Ratio: An even distribution between crust, cheese, and sauce: 1:1:1. Though, due to the cheese’s tendency to strip right off the top within the first bites, the rest of your pizza may simply just be sauce and crust.
Crust: Thin, may have sat in the oil too long or had too much sauce, as the pizza immediately droops upon picking it up. The back end of the crust was simply burnt.
Size: Pretty standard, slightly smaller than Mama Lucia’s.
Service: Not much to say here: ordered to pick-up, leaving very little room and time for interaction.
Price: $2.99 per slice. Respectable, but still overpriced.

So, according to the Pitch’s Pallette Pioneers, where should you get your slice?Unfortunately, we seem to be divided. But here are our arguments.
Nyomi and Beni: By far &Pizza is the right place to go. Not only is it perfectly placed on the outskirts of Pike and Rose, but it also offers the freshest (not reheated) and most customizable plate (box) of pizza. The cheese stretches elegantly. A plain cheese pizza with a sprinkle of basil makes for a mouth-watering combination of freshness, smoothness, zest, and crunch.
Ben: Mama Lucia is the way to go. I think I did a pretty good job explaining my reasons why in the summary of the slice, but I’ll say it again. It is an upgraded version of Flippin’ that is easy to eat, fairly cheap and gets all the good factors of pizza into one, like crispiness and good cheese. There are minimal downsides to the slice and is a very reliable place to get pizza in Bethesda.