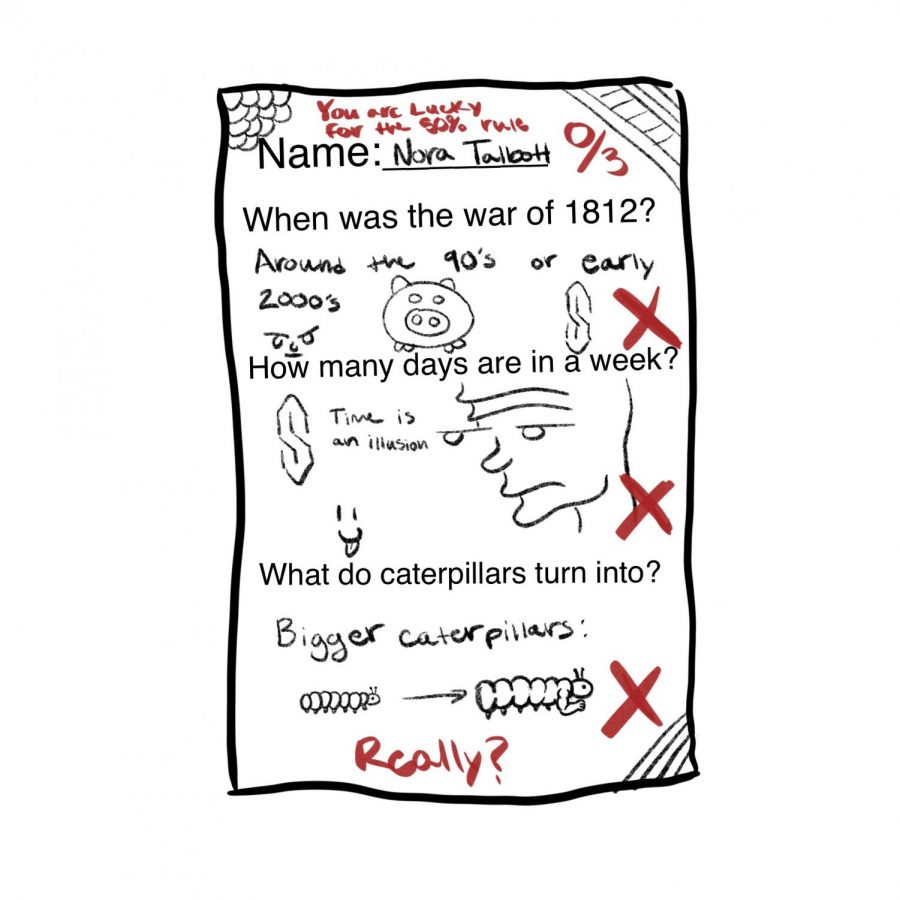 When my sister came home for winter break her freshman year at the University of Maryland, the first story she told was of her English professor going over the class syllabus. Her professor specifically mentioned MCPS. Her professor said that if you went to MCPS and got an A in your English class, putting in the same effort in her class could earn you a B or C.
MCPS is notorious for grade inflation because of three major policies: the elimination of final exams, the 50-percent-rule and a semester grading policy.
Final exams are a big part of most private schools in the area, and all colleges. They are a test designed to show your mastery of all skills in the course. MCPS, however, no longer has them.
“MCPS got rid of finals and replaced them with quarterly assessments, which were less effective in testing our knowledge. This has left us unprepared on how to approach finals due to the lack of experience,” WJ graduate Logan Moreland said, who is currently a freshman at the University of Maryland.
Finals are an integral part of ensuring students have retained information throughout the semester. Oftentimes students will just memorize concepts for an upcoming test and then forget that information in the following weeks. This learning habit will not work in college as retention is critical to pass exams and for future lessons.
Another grading policy that is not effectively preparing students for college is the 50-percent-rule. The 50-percent-rule allows a student to receive half credit for attempting an assignment. This provides a safety net for students that they will not have in college. If students don’t complete homework accurately in college, they will receive a grade that reflects their effort, or lack thereof. Similarly, completion grades are also a tool to inflate grades. By simply putting words on paper, students may receive a 100% to boost their overall grade.
Lastly, the county’s grading policy allows students to receive a worse grade in the second quarter and keep the higher grade. For example, if a student were to get an A the first quarter then receive a B the second, they would be able to keep an A for the semester, which is the only thing that is shown on the student’s high school transcripts. For instance, a student with a 79.5% — the lowest possible B — and an 89.5% — the lowest possible A — would have the same grade as a student who got 100% both quarters.
The grading policy also negatively affects high achieving students because they are unable to make themselves stand out to prospective colleges. Additionally, high achieving students can easily get good grades in their classes; therefore, they do not have to put their maximum effort into classes.
Lately, with online school, it has been even easier for students to put forth less effort after receiving their desired first quarter grade. The virtual learning environment hinders teachers’ abilities to manage students’ learning environments. The ability to turn your camera off and use the mute button allows students to ignore class without the teacher noticing.
MCPS should adapt their grading policy to resemble college structures. Semester grades should be an accumulation of all the assignments throughout the semester instead of having quarterly marking periods; then end the semester with a final that is worth a substantial portion of students’ grades. This grading system would lay the groundwork for future success in college.
High school is supposed to prepare its students for future education. Currently, our school is doing a disservice to all of its students, who may struggle in the first few months of college because they are trying to catch up to students who have more experience with the college-level format. MCPS should revert back to older versions of grading policy which set up students for success.