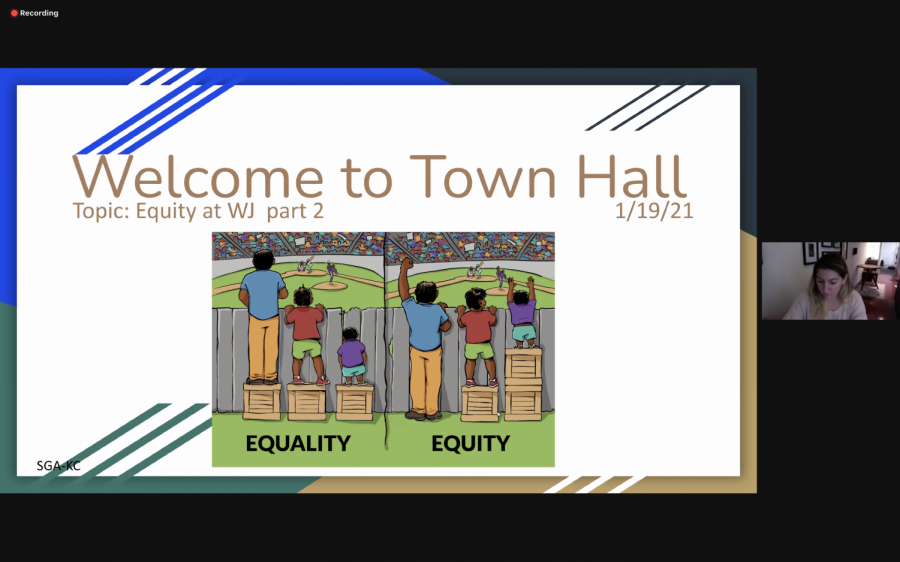 WJ’s fourth town hall was held on January 1, with its main topic discussing equity which was a continuation from the previous town hall held in December. The meeting was led by multiple administrators, staff members, the leadership team, Black Student Union, Minority Scholars Program, the Hispanic/Latinx culture club and a special guest from the MCPS equity unit, Dr. Daryl Howard. The focus of the meeting was to help students understand and reflect on who they are with their racial experience and help others understand the racial experiences of other cultural groups.

The previous town hall meetings were held in a webinar format, where participants were unable to turn on their microphones or cameras. The chat feature was the main function of the meeting, where anyone could ask questions or express any comments and concerns. For this town hall the SGA decided to make a few changes that could allow participants to unmute themselves and turn on their camera if they wished to do so.

After the general updates were given, the meeting continued on with all three clubs being introduced by the officers, as they explained the mission of their club/program and how interested students can join.

Dr. Howard from the equity unit was then introduced to the meeting, and explained his role in Montgomery county.

“I’m a specialist in the equity ignition unit what we try to do…is to provide equity race, cultural proficiency training, to staff throughout the district of 25,000 plus staff members and we also work with students all 166,000 students, as available as we can, as we try to support the work that is going on in school,” Howard said.

In order to keep the meeting as civil and respectful as possible, a few ground rules were established by SGA secretary Taty Ramirez. The rules consisted of people being respectful of other opinions and using the chat feature for any questions throughout the meeting to avoid interruptions.

Then the concept of equity was explained to participants and how these clubs and programs at WJ strive to achieve equal opportunity for all students. This was also branched off racial equity, which was explained as the idea that certain racial groups need more opportunities and resources to maintain or achieve structural change.

Other officers of MSP and BSU also expressed their concerns and opinions on what they’ve noticed at WJ. Their concerns consisted of minority students not feeling represented among the student body, the school curriculum has become less diverse, and ask that there be some kind of accountability when a student is harmed through insensitive racial situations.

When it comes to students taking accountability, Baker explained that due to privacy laws admin can’t always announce to the WJ community when a racial situation has taken place but assured that every incident that has occured has been investigated and actions were taken in place by following the county guidelines such as the student disciplinary guide.

“Each case by case situation is handled differently but going back to the confidentiality that is with students and the individuals involved we cannot disclose, however there are interventions that we do use but the primary that we are using…is a restorative justice process or a community circle where there’s a conversation about the harm that was done…,” assistant principal Nicole Morgan said.

Co- Presidents of the Hispanic/Latinx culture club Natalia Fontalvo and Josue Guevara, also had some questions pertaining to equity among the hispanic culture at WJ. Some of the questions consisted of how will WJ help hispanic students adjust to the American curriculum? What is the English department doing to have a more diverse program? And what is the school’s plan to celebrate hispanic culture besides the yearly assembly?

“ [The administrative team)… talked about having a morning announcement everyday, having a fact of the day for a particular culture everyday for that month…we talked about having little QR code scanning games in the hallways that have different facts about different people from different places…but the hardest part was making that come to realization because there were a lot of great ideas but not enough people interested enough in pulling it together…,” assistant principal Regina Rodriguez said.

Baker proceeded to talk about how she is willing to meet with club members if they ever wanted to talk about any concerns they had or changes that they feel are important to implement at WJ.

“…this is definitely long overdue but I’m glad that we have so many school leaders here both staff and students who are making that effort and I know it’s so important and it’s gonna lead to a lot of the types of changes that you guys want….” leadership teacher Melanie Schwed said.

The next town hall will be held in mid February and if students or staff had any other follow up questions they wished to be addressed in the next town hall they could do so by filling out this form.