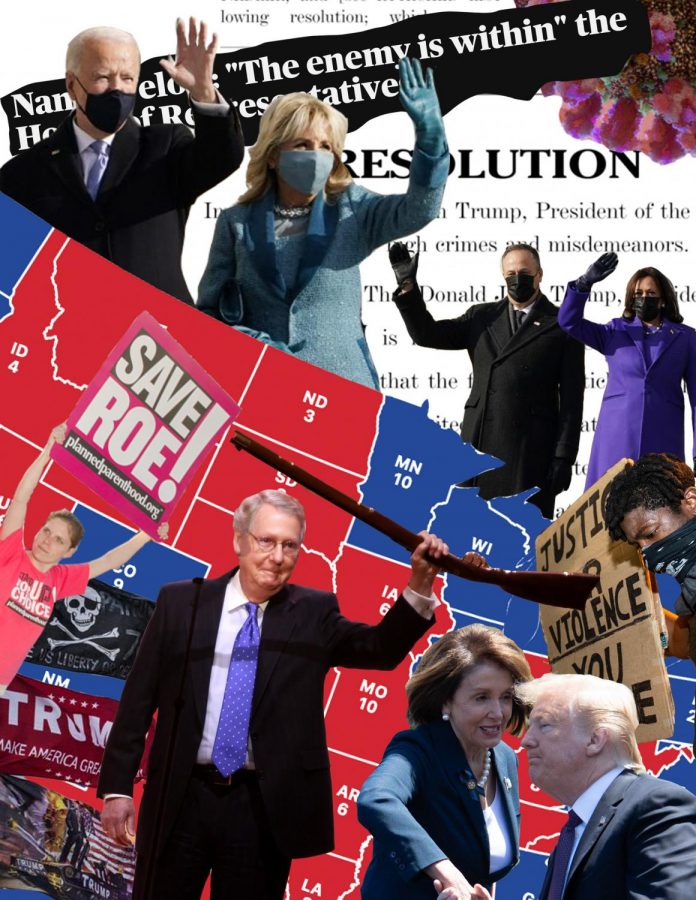 Photos courtesy of (left to right): ALL.org, Wikimedia Commons, 270 to Win, US House of Representatives and Association Now, Collage by Maeve Sanford-Kelly

The current generation of high school students is a generation who only ever knew the politics of Trumpism, who witnessed countless school shootings on television and in person, whose lives were turned upside down by a pandemic, who watched democracy come under threat after a nail-biter of an election, all before they were even old enough to vote. Out of this emerged a set of students more politically aware—but also more polarized—than ever.

“I don’t shy away from controversial topics or discussions because I believe the classroom is the best space for young adults to learn how to discuss rather than just debate. The academic space is also a great place to allow these discussions because I, as a trained professional, can help ensure that if something said is hurtful, oppressive, or incorrect, I can immediately address it in the moment,” social studies teacher Neha Singhal said.

The week following the insurrection at the US capitol consisted of many discussions, heated and calm, in classes as teachers showed presentations about the current state of American politics.

“My first period teacher was very understanding and he even felt like it was inappropriate to be lecturing right now with everything going on. He said that we need to talk about these things and politics, we cannot just move on and I couldn’t agree more,” senior Venus Latifian said. “It felt amazing to know that they care and want to have these extremely prevalent and important conversations with us.”

Heated political discussions between students aren’t only taking place in the classrooms. Social media has also turned into a battleground for political arguments, with “cancel culture” and mob mentality fueling the fires. When asked if she saw a recent increase in political polarization at WJ, senior Alina Khan referenced an event from last October involving The Pitch’s Instagram account, @humansofwj, where a student’s quote expressing support for former President Donald Trump in the 2020 election sparked outrage in the student body, receiving hundreds of comments.

“The comments were filled with anger at his reasoning behind his support,” Khan said.

Senior Abby Matson agrees that social media plays a large role in political polarization for young people, especially since content is tailored to its users.

“[Social media] creates an intensified echo chamber where algorithms specifically give you information that feeds your confirmation bias,” Matson said.

The “echo chamber” seems to exist not only online. Living in a very blue district, liberal perspectives often dominate the conversation, leaving little room for their conservative counterparts. Students have observed that in class, discussions are commonly one-sided, partially due to the liberal majority but also due to the scrutiny that many conservatives believe that they face when they share their beliefs. Many students often feel that they’re immediately shut down when they speak out.

“That’s the one problem with our country honestly, we don’t listen to each other. We immediately attack based on who the other person supports. It’s okay to disagree with people, but it’s not okay to disregard their opinion as if it means nothing. Instead of starting arguments, we should try to have conversations,” senior Olivia Zaid said.

Polarization is commonly driven by misinformation and media bias. Nationally, we see fringe news sources influencing their readers to believe conspiracy theories. Facebook groups and organizations such as Q-Anon promote government skepticism and warn of a “deep state.” While this largely affects middle-aged and older Americans, the political climate of WJ seems to reflect similar trends.

“Early on in the school year, I was surprised at how many students believed that masks did not work or serve any purpose. I was so glad folks said this in class and/or in the Nearpod question because it allowed me to help debunk this claim and provide them with evidence-based information on the issue,” Singhal said.

While Singhal is worried by the amount of false information spreading about the student body, she understands why young people can be so quick to believe such outlandish theories.

“I don’t blame the students for believing misinformation – how can they be at fault at 14 years old when so many politicians, who we are supposed to be able to trust, have spread these kinds of lies and allow for dangerous misinformation to spread regarding covid?” Singhal said. “It’s one of my favorite challenges of my job: to create the space where students can speak their minds, with the knowledge that misinformation will be debunked and unpacked in ways that are not disrespectful of learners.”

Most students at WJ aren’t old enough to vote, so many may wonder if political conversations are even supposed to be taking place at this age. However, Khan believes that political discourse is extremely important for young people.

“Our voices aren’t just valid, they’re crucial because they give a vastly different perspective from older generations who may not be aware or care that much about issues that we face,” Khan said. “Young people do need to have political conversations because that’s how we learn about our world and how we can solve larger problems that we can’t on an individual scale.”